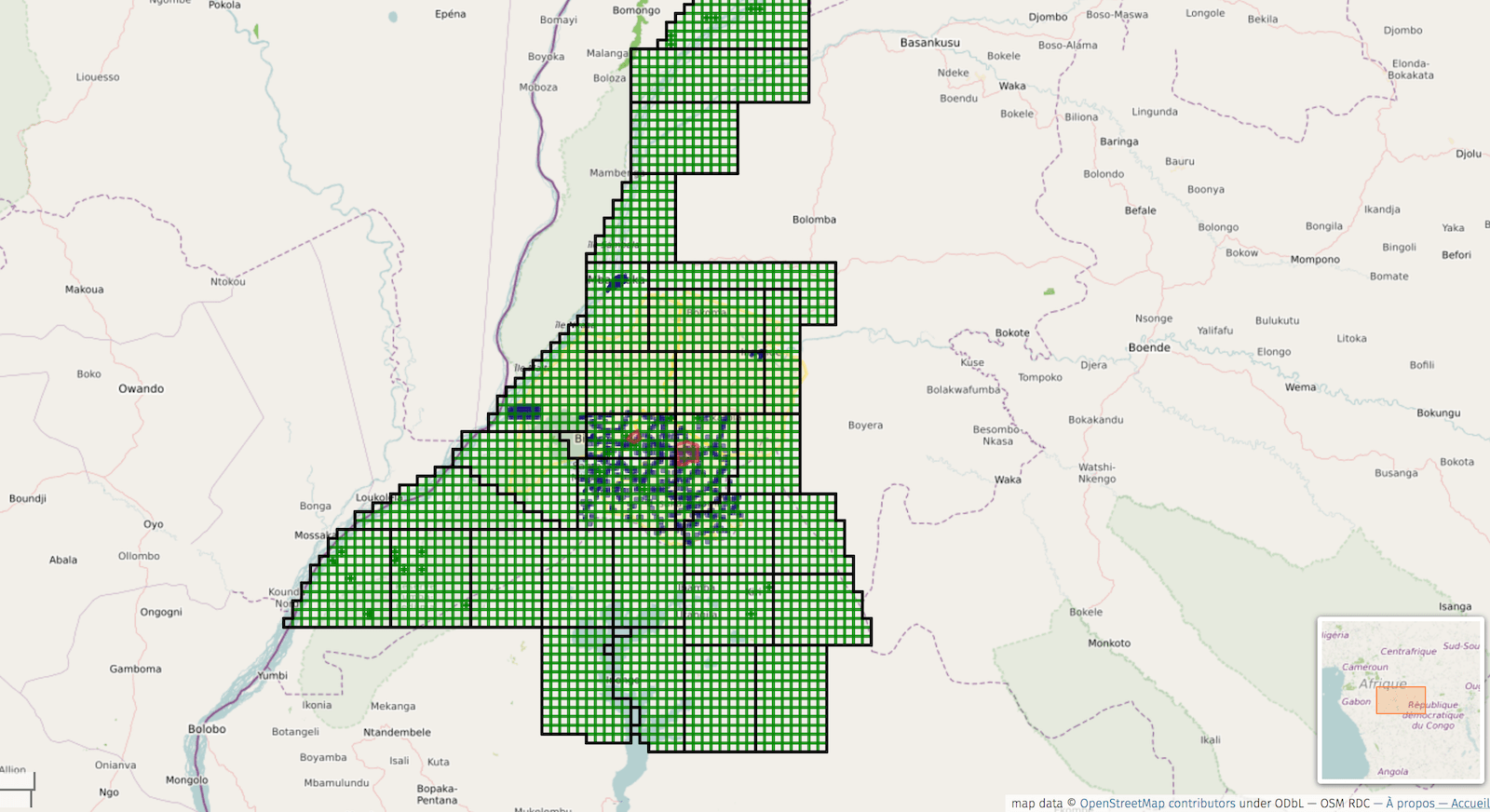 Since the beginning of May 2018, HOT has been called upon to respond to, or assist, a handful of disasters across the globe. Details on the projects, and how you can get involved are below. Maps can play a critical role in potentially saving the lives of millions of people worldwide, a big thank you to the mappers volunteering to create them.

Our first request came from the United Nations Institute for Training and Research (UNITAR) regarding flooding in Somalia. After delivering building data for the requested area we were asked to monitor any needs for Cyclone Sagar.

We were able to quickly map the areas of interest in Somalia adding over 18,000 buildings to the impacted area.

Results of the mapping

Ebola in the DRC

Ebola has made a resurgence in the Democratic Republic of Congo. A well prepared local OpenStreetMap community has been working with the Congolese Ministry of Public Health, local aid organizations as well as Missing Maps partners such as Médecins Sans Frontières (MSF) to coordinate the mapping effort. HOT is supporting this locally led response to help with mapping and validation as well as communications and coordination between stakeholders.

From May 8 until July 2, ~850 mappers added over 250,000 buildings and thousands of kilometers of roads and waterways to the map in support of relief efforts led by organisations including MSF.

Data made available via HDX (generated by the HOT Export Tool) https://data.humdata.org/group/cod?organization=hot#dataset-filter-start

CrisisMappers - Japan and OpenStreetMap - Japan, quickly put together projects to map infrastructure in the most heavily impacted areas around the earthquake near Osaka. HOT Coordinators have been assisting with communications and managing the response.

As of June 30, 435 mappers have made over one-million changes to OpenStreetMap in response to the earthquake.

Mapping projects for the Osaka Earthqauke can be found here: https://tasks.hotosm.org/contribute?difficulty=ALL&campaign=DRONEBIRD

We were alerted that the OSM-Colombia community had immediately put together a project when word came that the Hidroituango dam could potentially fail. HOT has helped promote their effort and are standing by for any further needs.

Around 150 mappers have mapped over 50,000 buildings around the Hidroituango dam in preparation.

A larger area around the dam was mapped with the Mapswipe app: https://mapswipe.org

In late May, HOT was contacted with a request on behalf of the Disaster Management Centre of Sri Lanka for building data in the most heavily affected areas experiencing flooding. This is seasonal, monsoon rain and just two years ago we coordinated a similar response. The area is quite large with many buildings, so we have Activated a team to coordinate the mapping response.

In just the first hours of mapping, 37 mappers added over three thousand buildings to the area experiencing the worst of the flooding. As of June 10, almost 600 mappers have joined the effort and have digitized almost 100,000 buildings to the map of Sri Lanka.

Data made available via HDX (generated by the HOT Export Tool): https://data.humdata.org/group/lka?organization=hot&q=&ext_page_size=25

HOT monitored the eruption of Mount Kilauea from early on. Being, so far, a relatively slow progression event there has not been much need for our help except to set up a project for the local mappers. We continue to monitor and stay in contact in case things get worse.

About 70 mappers have made almost 60,000 changes to the map of Hawai’i including where the fissures and lava flows are.

The area around Leilani Estates has been heavily impacted, the mapping results can be viewed here: https://osm.org/go/Q0fnIqxI-?relation=6526869

Just after the eruption of the Fuego Volcano in Guatemala, OpenStreetMap contributors began filling in the impacted area’s buildings. HOT has been monitoring the needs of response agencies and are publishing targeted projects to fulfill those requests. Just over 17,000 buildings have been added in the area surrounding the Fuego Volcano, see also the additional resources described below.

We have increased the frequency of data exports to HDX, now Guatemala is updated daily: https://data.humdata.org/search?q=HOTOSM+Guatemala&ext_search_source=main-nav

DigitalGlobe has released more recent imagery of Fuego Volcano area, which we have uploaded to OpenAerialMap

We cannot thank HOT Community enough for their contributions, and for anyone affected by these disasters, we’re wishing the best possible outcome for you and your families.