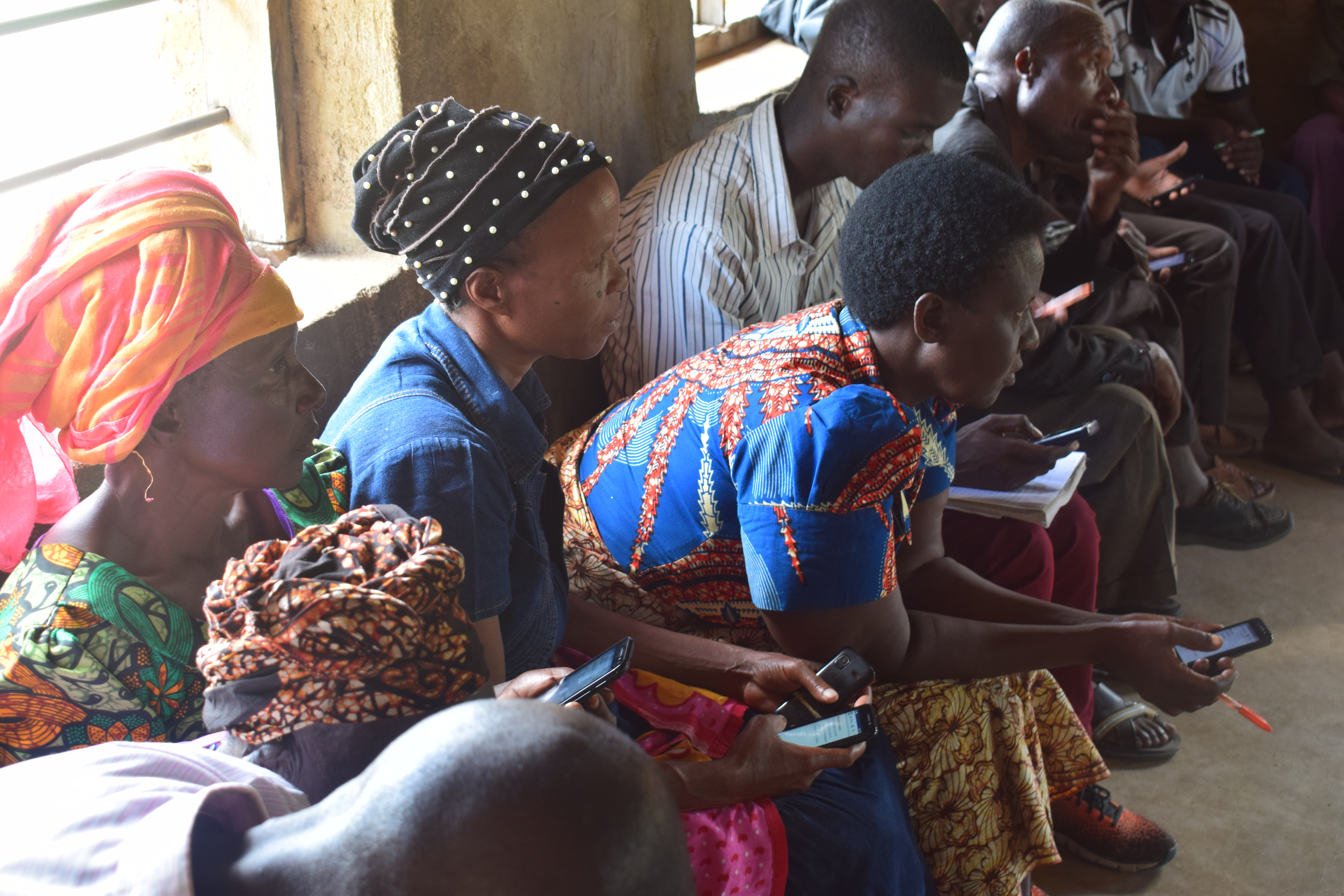 In 2019, HOT was one of nine grantees to be selected in the first round of the USAID WomenConnect Challenge, which aims to bridge the digital gender divide and increase women’s access to and use of technology to improve their everyday lives.

As part of the WomenConnect Challenge, HOT supported three communities in Peru, Tanzania and Zambia, and engaged the global YouthMappers network to contribute data about gendered issues that affect them.

We weren’t just focused on producing map data, but on creating a space for men and women to use map data to identify and challenge gender norms and barriers, share and implement solutions, and change community structures that have been holding women back. Our goal was for women to be explicitly included in each phase of the mapping process, and for male advocates and leaders to create an inclusive environment for women.

A look into the achievements of each community:

GAL School (Peru): GAL is a school and consulting center focused on empowering students to become active agents in their education and communities. Across Peru, gender inequality is still pervasive but until now, students have been unable to trace the sources of inequality or identify the actions society can take to address them. GAL created a project-based learning approach with four secondary schools in Cusco and engaged students from three different universities. Each project began with students generating a hypothesis pertaining to gender issues, cultural norms and expectations, or differences in beliefs and practices across urban and rural areas. They then learned how to use OpenStreetMap, KoboCollect, Mapillary, Maps.Me, and MapSwipe to develop a data model and surveying tools that would provide them the data they needed to support or reject their hypothesis. 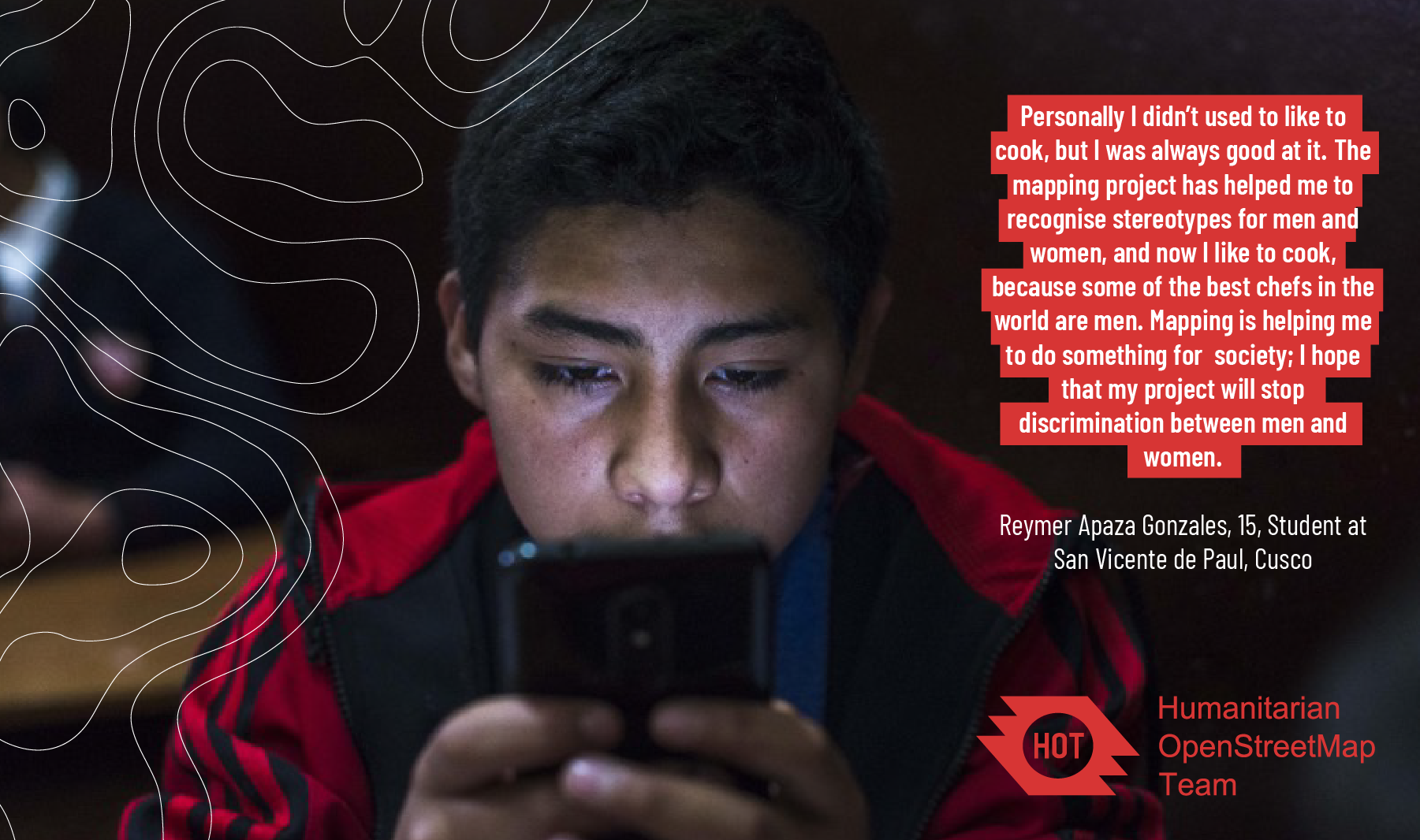 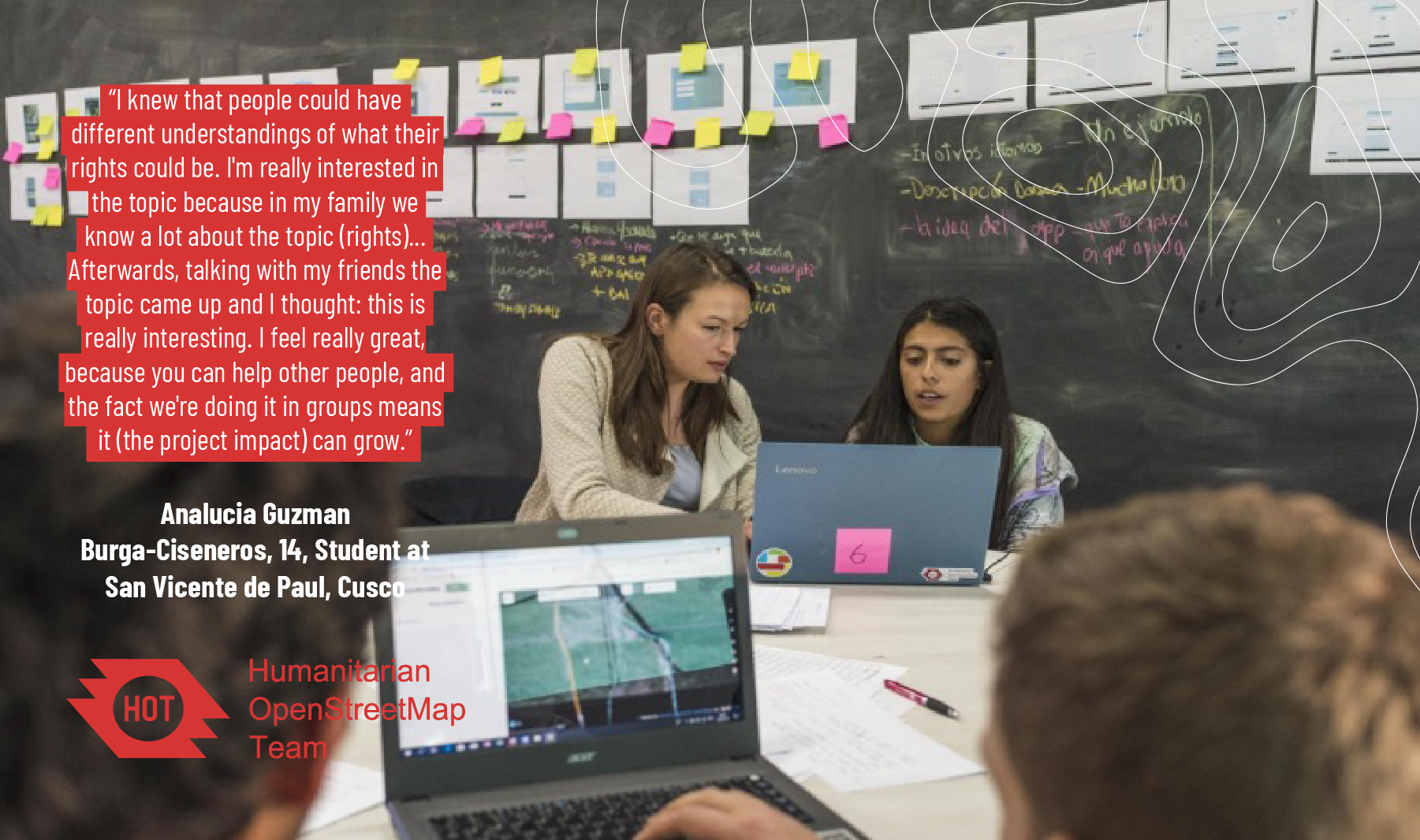 At the end of the program period, students were challenged to think about ways that they could share their findings with a larger audience and use what they had learned to engage in meaningful, oftentimes delicate, conversations about gender with their peers, students from other schools, and their larger community. Students shared their learning with one another in peer-exchange sessions. Some groups went on to create videos that could be shared through social media, held their own information sessions in schools, and even booked slots on their local radio station and handed out flyers to share their conclusions and ideas for action.

GAL School is continuing their important work of empowering students to recognize and address gender inequalities through map data as a 2020 HOT Micrograntee.

Crowd2Map (Tanzania): Crowd2Map supports women and girls in the Serengeti District of Tanzania, focusing their mission on reducing gender-based violence (particularly female genital mutilation) and empowering women economically - often in the form of enabling women to set up small businesses. Crowd2Map leverages local and global communities of mappers to create digital maps that are used for planning education programs and emergency response calls for FGM. Through the WomenConnect Challenge, Crowd2Map sought to expand their efforts to support women and girls who were victims of gender-based violence through technology and mapping.

Crowd2Map trained members of the Women and Children’s Protection Committee in 78 villages in Serengeti in using smartphone devices, the value of mapping and map data, adding points in their community to the map, and reporting instances of gender-based violence within their communities to local authorities. From there, a network of 87 women, known as ‘digital champions’ in their communities, were provided with smartphones and became advocates for the prevention of gender-based violence and a resource for victims. Leveraging OpenDataKit (ODK), a reporting system was established, where victims could go directly to these digital champions to submit an electronic report. Local authorities were then able to connect with digital champions over WhatsApp to ask for additional information, provide guidance, and share updates on actions taken. These digital champions continued to add local edits to the map, ensuring that first responders could locate victims of gender-based violence and female genital mutilation in some of the most rural communities in Tanzania.

Technology has not only helped these women to recognize when domestic violence was taking place in their communities, but provided them with the tools and knowledge they needed to strengthen their resilience and speak out against it. By the end of the program, Crowd2Map witnessed a shift in mindsets surrounding deeply rooted gender norms in the project areas, where women felt they had a responsibility to educate both men and women in their communities and speak out against gender-based violence during community gatherings. 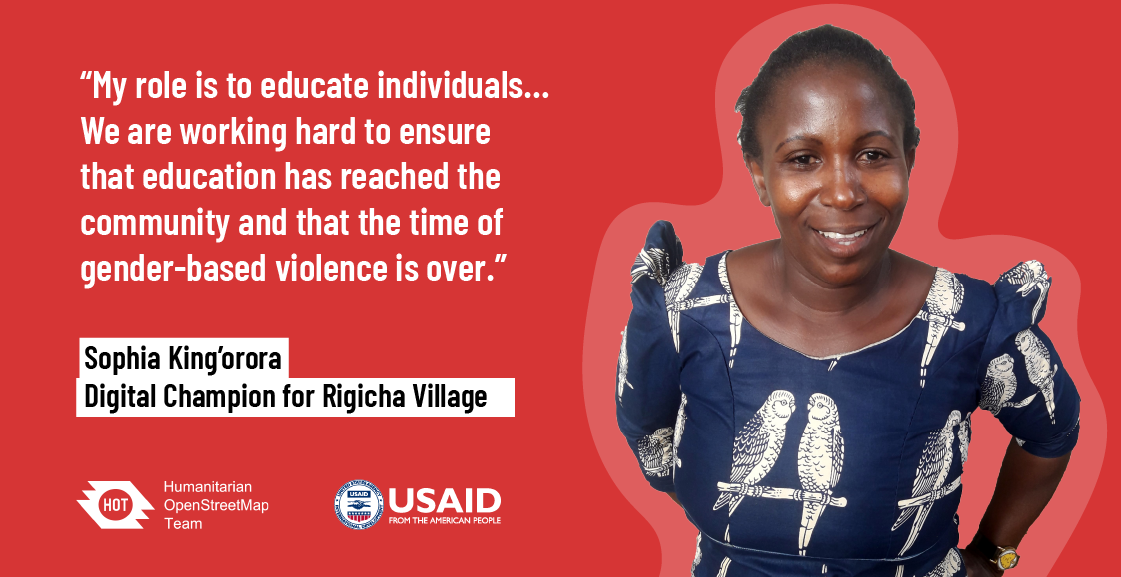 YouthMappers (Zambia): In Zambia, gender inequities continue to impact women’s economic opportunity, education levels, and health. While support services for women and girls exist, a lack of awareness and information on how to access these services has led to poor uptake. The YouthMappers network in Lusaka worked to address these inequities by mapping facilities that support women, including health clinics, hospitals, support centers for victims of GBV, and HIV testing sites. Engaging students from two universities, YouthMappers in Zambia were trained in OSM, ODK, and Maps.Me, and went out into their communities to put these critical services on the map.

YouthMappers (Global): YouthMappers is a global network that supports universities to offer meaningful global learning experiences, build a socially engaged citizenry, enhance long-term scientific capacity, and foster youth leadership through open mapping and data. YouthMappers are extremely diverse, covering over 150 universities worldwide. HOT and YouthMappers partnered to launch the YouthMappers WomenConnect Challenge, inviting YouthMappers throughout the world to participate in remote mapping projects and earn the chance to attend the 2019 HOT Summit and State of the Map Conference. More than 500 YouthMappers came together to remote map areas in Peru for GAL School and Tanzania for Crowd2Map, building their awareness of gender issues in other communities. As part of the challenge, six YouthMappers representing their university mapping chapters from Ghana, Rwanda, Uganda, Bangladesh, Nepal, and Colombia were selected to attend and present at the 2019 HOT Summit and State of the Map Conference, sharing how they advanced gender inclusivity at their local universities. For each student, it was their first time traveling internationally and presenting at a global conference, creating a networking opportunity unlike any other. After a full week of sessions, each YouthMapper returned to their university with the goal of supporting other students to apply what they had learned and to continue advancing gender inclusion within their chapter. 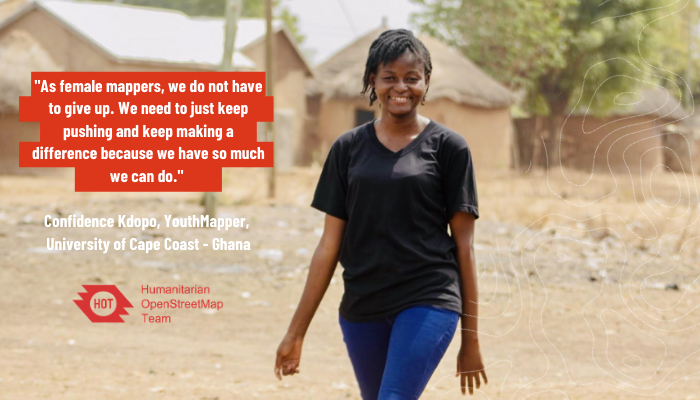 Through the WomenConnect Challenge, HOT learned that map data can be more than just buildings and roadways added. It can be a starting point for changing the conversation around advancing gender equity, providing both men and women with the data they need to identify sources of inequality within their communities, collectively identify solutions and gain the confidence to enact those solutions.

For more information about the program, please contact partnerships@hotosm.org.

International Women’s Day (#IWD2020) celebrates the social, economic, cultural, and political achievements of women, while calling on the world to accelerate progress towards gender equality.