Before you read this, please don't be confused with article: HOT in Sumbawa Island, Indonesia. Sumba and Sumbawa are different island (though the name it's quite similar).

Sumba Island it's located near sea border between Indonesia and Australia. Our training was held in a small town called Waingapu from 7th until 8th of July. But, before we're move on to the training, I would like to tell you how hard to get into this island. We (myself and Jeff) had to take flight from Lombok to Denpasar because there's no straight flight from Lombok to Waingapu. We arrived in Denpasar at 7.30 am (local time, UTC+8) and our next flight to Kupang be at 10.35 am. We were just sitting and hanging around the airport then we were checked in, our flight was delayed until 1.00 pm. After we came back, it was delayed again until 3.15 pm and we were boarding at 4.20 pm. We transited in small town called Kupang (East Nusa Tenggara) at 6.15 pm, we should continue our flight to Waingapu but somehow the airline canceled the flight to Waingapu. So we had to spent a night in Kupang. Our new flight schedule to Waingapu was at 11.00 am and the training should started at 9.00 am. And because we were late, we had to start from 1.30 pm and extend the training until 8.30 pm.

That's the bad part. The good part is most of participant are really impressive. They already made their own paper map, and among of them there was a participant asked us how to export the digitized map from QGIS to OpenStreetMap because he's already done mapping some places. There was a lot of discuss and question like: is it possible to use imagery data from Google Earth when editing maps in Java OpenStreetMap (JOSM) Editor? Because Sumba Island still doesn't has good imagery from Microsoft Bing until now.

The hardest part for this training is: there was a big gap between people who is familiar with computer and people who isn't familiar at all. But everything went well until the second day when we had evaluation process. There was a participant that almost made me crying at the moment, I forgot her name (I'm very bad with names) but I remember what she said:

"First, I wanna say thank you both for facilitator Mr. Jeff and Emir. When I was told by ACCESS that there will be a mapping workshop, I didn't know if I can do it or not because I'm not familiar enough with computer and mapping, but, when I saw Mr. Jeff and Emir always smiling during the workshop and trying to teach us one by one with their patience, I feel motivated. And I'm trying to do my best here and I'm very happy I can do it, thought I still need a lot of practice. I'm hoping that all of us still keep in touch to support this process."

I was speechless until I couldn't interpreted it for Jeff at the moment. One more thing, since Sumba Island still doesn't has good imagery, they are more interested collecting data with GPS device. That's all I know because we didn't made it for follow-up plan session because we had to catch a flight! But they promised me to keep in touch so we would know what their plan are. I'll update this article soon! 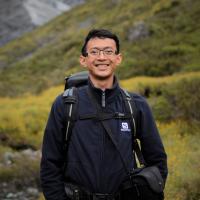