Yesterday the World Bank further committed to open-data on their blog by stating "the World Bank only supports citizen-mapping efforts that give users free access to the map data they create." This commitment to open-data will ensure that those putting data in are able to also utilize this information. Such an announcement brings much relief to myself and many others concerned after a previous announcement about an agreement between the World Bank and Google. The core of this announcement was the intention to provide faster access to Google Map Maker information in humanitarian response, but it did not come across in communications.

Now let's be clear in cases of disaster when lives are at stake I think all possible data should be utilized. So an agreement to provide access to the Google Map Maker data is clearly a positive thing. The concern was the endorsement of the Map Maker platform for actually mapping, since the resulting data is not truly open. Governments, citizens and NGOs need to decide what is best for their own programs. The World Bank states "citizens are free to choose the projects and tools that best meet their goals," there is no one right tool for open-geographic data. I hope when organizations are choosing how they are going to collect their information that OpenStreetMap is considered. The power of our large community, the already existing data and the many open-source tools available can help efforts start further along than they might with other technology. 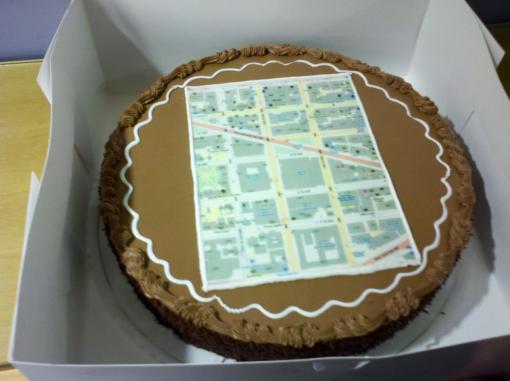 Map Cake from Joint Mapping Party at the World Bank

Call to the Community

I think this is an opportunity for OpenStreetMap to continue to expand in areas where there is not a large presence already. This is not going to be without community effort though. We need to continue to make the tools better and easier to use. The integration of Potlatch2 into Transwiki for example is a huge step in making things more accessible to the world. It is too much of a barrier to entry to teach someone a new technology when the software is in a language they do not speak. Usability of OpenStreetMap tools for those not well versed in technology needs to be further improved, that is why Development Seed’s proposal to the Knight News Challenge excites me with its potential to expand contributors even further.

We also need to expand access to collection tools as well. The revamp of the GPStoGo (now MapsForAll) program needs to be expanded. Without access to satellite imagery or GPS it is impossible for people to start contributing to OpenStreetMap and the cost of a GPS unit is far too extravagant in many of the places where the World Bank works and many people live on less than $2.00 a day.

Further improvement of support for right to left languages can also allow more people to contribute. Recently there has been improvement, but until languages such as Arabic are supported in all the tools there is still going to be a barrier to entry. Speaking English or other languages with Roman Characters should not be a requirement for contributing open-data.

Curious about how these OpenStreetMap tools are utilized in cultures and regions other than your own? Come join HOT for an internship or talk to someone who already has. Not ready for that level of commitment? Join an activation, help map a region for preparedness or contribute code to some of our tools. Feel you can make a monetary contribution? That helps too, that is how we are able to pay for travel for some of our internships and purchase equipment. Just improving the core OpenStreetMap infrastructure, data or technologies is a huge step in helping HOT.

Together we can make open-geographic data available for all of the world. I’ll see you somewhere on the map.