The first days in Sénégal flew by for the three of us engaged in this intense exploratory mission of HOT in Senegal led by Nicholas Chavent along with Stephane Goldstein and Will Skora.

The first days in Sénégal flew by for the three of us engaged in this intense exploratory mission of HOT in Senegal led by Nicholas Chavent along with Stephane Goldstein and Will Skora.

In the big picture, we are spending 3 weeks (20 May - 9 June) in Senegal conducting outreach, training, and networking activities aimed at fostering the growth of the OpenStreetMap (OSM) project in Senegal. Eventually those actions will lead to the building of a local OSM community and the creation of an OSM environment in Senegal and in Western Africa in crisis preparation, recovery and as well development contexts. This mission was funded through the World Bank’s ICT (Internet and Communications Technology) Branch and the Fondation de France, thanks to a partnership with OpenStreetMap France (OSM-FR).

HOT had been asked by the World Bank’s ICT Branch to present the OpenStreetMap project to community organizers, local and national government officials engaged in two WB projects in two towns of the suburbs of Dakar (Pikine and Guediawaye) and in the Southern region of Casamance. The WB’s ICT Branch is also interested in reaching out to Academics and ICT actors throughout the country. HOT is specifically discussing OSM - its philosophy, its past use in Haiti and Indonesia in response to humanitarian crises, opportunities to use OSM data in their work, and conducting mapping parties where participants learn how to add and edit data to OSM as well as advising on using OSM. In addition to this mission with the World Bank which will last the first two weeks, we also received a grant from Fondation de France to foster the emerging OSM community in Sénégal with a focus on crisis preparedness in Senegal and in West Africa which perfectly compliments our work with the World Bank.

After the classic intense preparation work for this mission, the team has been built and arrived there between Sunday 20-May and Thursday 24-May, part of the equipment was procured from France by Gael, the chairman of OSM-FR (thanks!). Nicolas was the first to land in Dakar to set up the mission: meeting with the WB (both the ICT Branch and WB staffs from the Senegal Office ) and its partners from the Agence for the Development Municipal (ADM) , arranging the first mapping parties, completing the hardware purchases and initiating the meetings with the Senegalese actors in the ICT scene : JokkoLabs, the first co-working space in Western Africa, and also helped us procure equipment - Thanks, and the CETIC (an incubator for ICT startups in Dakar). Will landed in the morning of the 23-May and right off from the plane dove into some prep work for the workshop scheduled for the following day at the World Bank’s Office in Dakar with community organizers, local and national government officials as well as a professor and students from the Casamance region in Southern Senegal. Stephane arrived from Portugal early morning 24-May, only a couple of hours before our first workshop began at the World Bank’s office in Dakar. 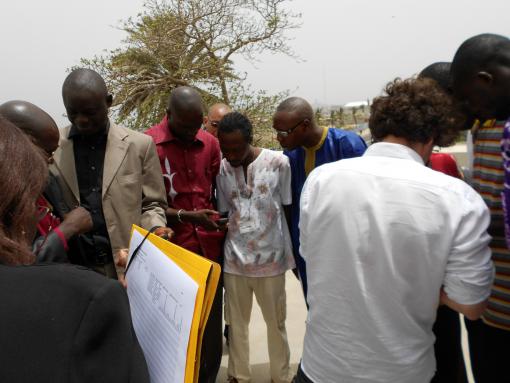 Participants from the Casamace region in Senegal are learning how to use a GPS at a HOT Workshop.

The day started with us meeting with Maimouna Diop/Diagne in charge of the ICT Directorate within the Ministère de la Communication et des Telecommunication. He showed a strong interest for OSM and offered to introduce us to academics, other actors in the ICT sector, and the Plan National Geomatique (PNG), a project funded by Agence canadienne de développement international (ACDI) to support the Senegalese government in setting up its National Spatial Data Infrastructure (SDI). After the remaining participants arrived, Maimouna Diop and Demba Balde, a Senior project advisor at the World Bank, facilitated a discussion with the 25 participants who laid out their needs with respect to IM/GIS and ICT and the specifics of the Casamance context in terms of project implementation. Nicolas gave a presentation on OSM and the work of HOT since the Jan. 12 Earthquake. After a quick discussion and lunch break, the group moved to the hands-on part of the workshop (outline), The participants were organized in small groups to learn about OSM techniques around data collection with GPS, OSM Tracker on Android smartphones, Walking papers and forms, and went out to map a small area surrounding the World Bank’s office. Participants returned, the activities resumed and the trainees were exposed to the basics of editing the OSM database with Java OpenStreetMap (JOSM), making sense of GPS, Bing high resolution imagery, the OSM tagging scheme and some notions of data validation. Other OSM and HOT tools (tasking manager and data download service) were demonstrated. The day finished by a positive group discussion about the relevance of the OSM approach to data collection and mapping in the context of Casamance. 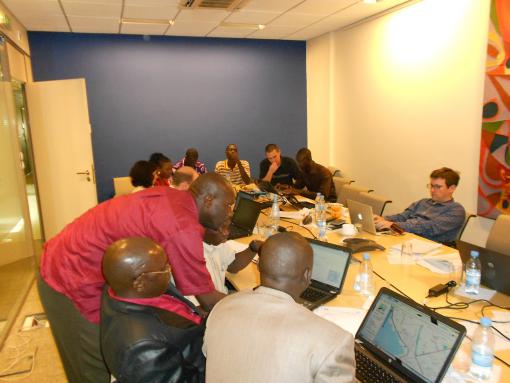 Participants from the Casamace region in Senegal are helping each other learn how to sign up for OSM. 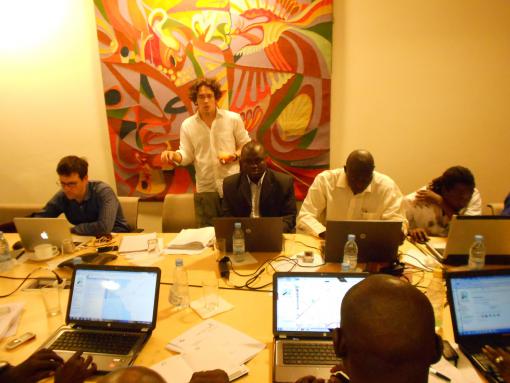 Nicolas Chavent responds to a question during a discussion at a HOT workshop.