We left Senegal a few weeks ago and finally digest the key elements from these 3 weeks that we are sharing below. We have been succeeding in engaging actors across different sectors in Dakar, Louga and Saint-Louis through a mix of meetings and mapping parties. We engaged with Local and National Government groups such as regional government ARD for Casamance and Louga, national entities such as Agence Pour le Développement Municipal (ADM), Plan National Géomatique (PNG), Directorate of ICT (DTIC), Agence pour le Développement Informatique de l’Etat (ADIE), Comité intergouvernemental de concertation et de coordination (GICC), city governments of Saint-Louis but also of Pikine and Guediawaye (two large cities just outside Dakar). We established great connections with JokkoLabs, the first co-working space in Western Africa, and the CTIC an incubator for ICT start ups. Strong links have been as well established within the academic sector primarily through the Geography Departments of the Universities of Cheikh Anta Diop - UCAD (Dakar) and Gaston Berger - UGB (Saint-Louis), the Laboratoire d’Enseignement et de Recherche en Géomatique (LERG) of the Ecole Supérieure Polytechnique (ESP) from UCAD as well as the recently created BTS (Brevet de Technicien Supérieur, a vocational training certificate taken at end of 2-year higher education course) in Geomatics of the Centre d'Entrepreunariat Développement Technique (CEDT) G15, the digital campus of Agence Universitaire de la Francophonie (AUF) in Dakar and Saint Louis.

Those meetings and these half day or day long workshops were all singular, intense, moving and rich, full of openings for OSM. Each of them truly deserves a blog post of its own, but we decided to group them under the main categories that we see forming an OSM ecosystem in Senegal : GIS projects (Guediawaye and Pikine) and Local groups (Louga), Technological community (JokkoLabs/ AUF), Academics, Geomatics (PNG), and Humanitarian actors.

In this post we will focus on the to GIS projects we reached out. In Guediawaye (25-May) and Pikine (30-May), we facilitated workshops in the same format as earlier, consisting of presentations and hands on sessions around data collection and editing with JOSM. They each involved up to 25 participants from local communities, civil servants from the local government as well as staffs and experts from ADM, and WB project experts. The discussions throughout the days made very clear the interest and fitness of OSM for use in the context of flood mitigation projects and community participation. OSM was recognized as an efficient tool to produce baseline and community-relevant data, as well as empowering communities or citizens with this new capacities, the dimension of the common good of OSM was also fully appreciated. 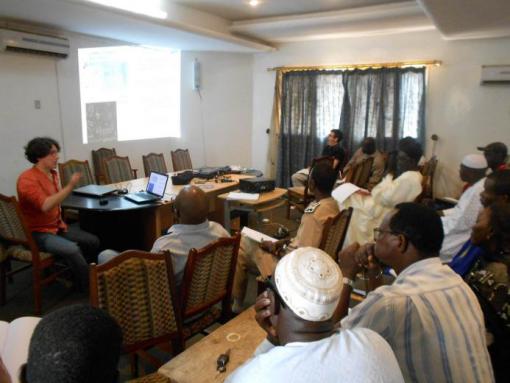 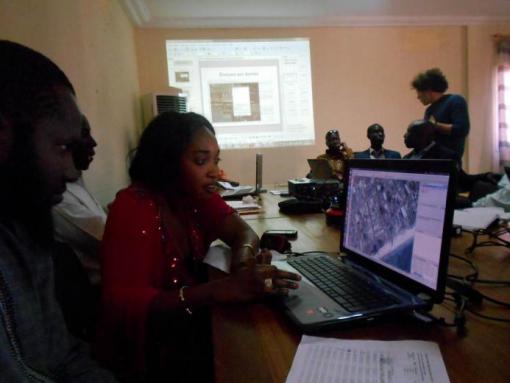 Participants of the HOT workshop at Pikine working on JOSM

The participants assessing the capability and appropriateness of OSM in the context of the project unanimously expressed their interest for a continuing mapping and capacity building program rolled out in their territories. This general will for an OSM project as well as the desire for mapping expressed by some of the participants form a strong foundation upon which OSM can build in Senegal within the framework of a paid project as well voluntary efforts from pioneering groups.