It’s finally time to mention the mapping party HOT and OCHA-ROWCA co-organized at the OCHA Office in Dakar the 30-May where we brought together UN IM/GIS from OCHA, World Food Program, UNICEF and ICRC, Karim Sy and Herman Koassy from JokkoLabs and HOT.

It’s finally time to mention the mapping party HOT and OCHA-ROWCA co-organized at the OCHA Office in Dakar the 30-May where we brought together UN IM/GIS from OCHA, World Food Program, UNICEF and ICRC, Karim Sy and Herman Koassy from JokkoLabs and HOT.

The objective of the day beyond presenting and exposing the audience to OSM and the work of HOT was to put the focus on the cooperation between Humanitarian actors and the Voluntary Technical Communities (VTCs) in the context of crisis response and preparedness with a focus around Mali. This cooperation has been happening since Haiti 2010 in the context of responses to the various crisis.

Asides of this, OCHA, classic actors and the VTC (inclusive of HOT) have been building the interface for cooperation between “classic” humanitarian responders and VTCs through the formalizing of various Communities Of Interest (COI). This mapping party and this overall HOT exploratory mission to Senegal was to a certain extent a mission of the COI Preparedness that HOT is co-leading with OCHA.

The morning session featured resources to foster collaboration among HOT, OSM, and OCHA. First is the Common Operational Datasets (COD), a website managed by OCHA to list out the best layers for consideration in crisis response or in preparedness. Second was the potential of tools like geonode, a website for sharing GIS information in the form of raw vector, raster, and maps that the World Bank is deploying in countries under the OpenDRI initiative which aims at building risk management through an open data approach of which geonode is a tool. This approach has been recently implemented in Haiti where HOT has been collaborating with OCHA, FOD, and Haitidata.org.

Then Karim and Herman presented the work of JokkoLab’s work around SamaBaat, a web portal featuring various social media tools combined with Ushahidi and used by the Senegalese Civil Society to monitor the last presidential election. All those cases generated significant interest amongst the IM/GIS practitioners and the discussion focused on the concrete steps to turn this potential into action and to experiment with OSM and other VTC tools using an open data approach approach in a West African and Senegalese Context.

All were in agreement to set up a Geographical Information Working Group (GIWG) inclusive of VTCs (including OSM) based on past experience (Haiti), where activities can be carried out that link to the workplans and agendas of key humanitarian actors and which can benefit from and feed to the design of the COIs which is still on-going within the HQ of humanitarian agencies and VTCs by developing this Senegalese/ West African instance. 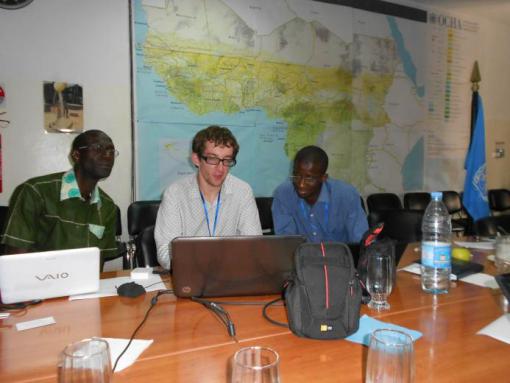 William teaching JOSM at OCHA, with a nice Africa map on the background