Today we are excited to announce the relaunch of LearnOSM in conjunction with the MapBox team.LearnOSM was originally envisioned by Jeff Haack, it came out of necessity from HOT's work in Indonesia. There are many training materials for OpenStreetMap, but few that have been designed in a clear way for beginners. Often instructions are buried in a wiki or assume someone already has some indepth technical knowledge.

Today we are excited to announce the relaunch of LearnOSM in conjunction with the MapBox team (read their blog post about it here). 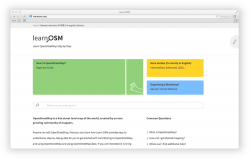 LearnOSM was originally envisioned by Jeff Haack, it came out of necessity from HOT’s work in Indonesia. There are many training materials for OpenStreetMap, but few that have been designed in a clear way for beginners. Often instructions are buried in a wiki or assume someone already has some indepth technical knowledge.

In the middle of 2011 two teams were travelling around Indonesia providing training to community facilitators and local NGOs in how to use OpenStreetMap. The hope was these groups would then be able to create poverty maps using the OpenStreetMap data instead of the hand-drawn maps previously utilized. After a particularly bad training Emir Hartato and Jeff Haack worked an entire weekend to revamp the training methodology. They began by rethinking how to approach teaching people about OSM and even before that how to help them think about maps. A few weeks after the redesign of the training course Jeff registered LearnOSM.org and set-up a WordPress site. From there things began to take off.

I sometimes joke if you want to get something translated quickly release it in English and Bahasa Indonesia. At least that was the case with the LearnOSM materials. Very quickly offers to translate came through. At that time we were simply copying around a large quantity of Google Docs and then eventually pasting those documents into the WordPress blog. Of course this is a manual process and not sustainable. Fortunately in came MapBox.

HOT was looking for a way we could more easily accept translators and a website that showed the professionalism that the actual written words being conveyed provided. We were lucky that Jue Yang and Alex Barth from the MapBox team were able to work on the relaunch of LearnOSM with support of a Knight News grant.

MapBox has long built internal tools to make their own development process easier open-source. The glue of the new LearnOSM is no different. Prose.io is the engine that is behind management of the content. Everything is then hosted directly on Github. As a small team this greatly helps HOT not greatly expand our system administration needs. Beyond the glue holding everything together there is an amazing design. We have Jue Yang to thank for that. The result is better than anything we could have hoped to do on our own. And the glue holding all of us together in this conversion? The tireless Alex Barth who originally conceptualized this idea and herded us all into making it happen. And of course the rest of the MapBox team for any input they provided and the creation of many of the tools in use.

If there are materials you’d like to see on LearnOSM it is easy to suggest them. Simply file a ticket or submit a patch. We can’t promise we’ll get to adding every ticket added, but we’ll at least know you are interested. And to all of you that has participated in a HOT workshop in the past, you already have helped. You’ve allowed us to refine and test this materials. Without your questions and participation they wouldn’t be what they are today.