One of the unique features of OpenStreetMap is the license to use customise and visualize the data as maps, charts, and more. However this is sometimes easier said than done.

One of the unique features of OpenStreetMap is the license to use customise and visualize the data as maps, charts, and more. However this is sometimes easier said than done.

As HOT's work expanded since its creation in 2010 and mapping trainees around the world have asked questions like 'why doesn't this amenity or shop display on the map !?', HOT realized the need to better classify and visualize the OSM data that is collected and used in developing countries and humanitarian contexts. Brian, a fellow HOT coordinator for the current Cap-Haitien Project in Northern Haiti, recently wrote about the HDM Preset Redux which improves the classification and standardization of tags used in OSM by HOT.

Complimenting the HDM Tagging Preset Redux, we've released the HDM JOSM style, a custom map visualization for JOSM , the popular OSM editor. The HDM JOSM Style controls how features in OSM data like rivers, highways, and points of interest are visualized within JOSM as users edit.

There's a few notable characteristics that we've made to better highlight the work that OSM editors are making with HOT. One improvment is to add color to features that would otherwise be gray in the default JOSM Map Style and can be easily missed by editing mappers. Points of interest included in the HDM Preset, like amenity=social facility now have icons. 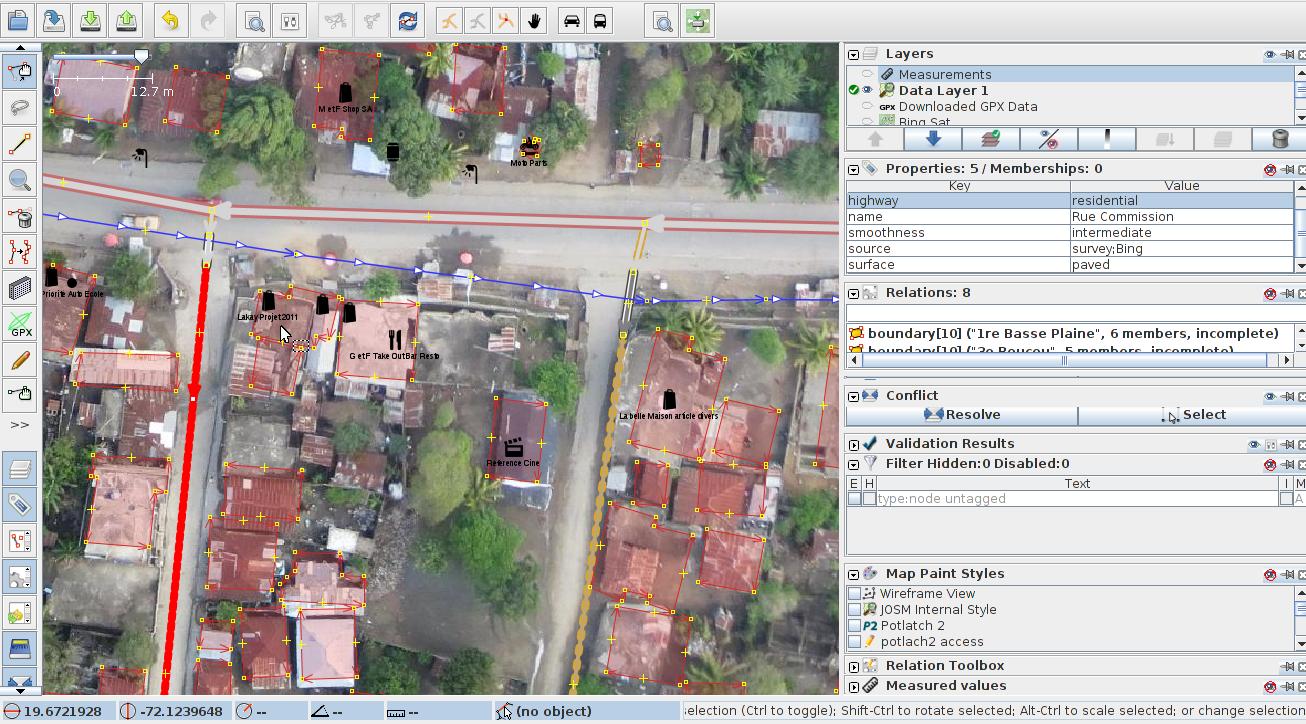 Showing the use of smoothness and surface tags in Limonade, Haiti

The surface and condition of highways is another specific modification that we've made. The surface of the road and its smoothness can vary greatly in many HOT areas, even in urban areas that are relatively densely built. Using OSM's surface and smoothness tag, we've styled the roads based on the quality of the road. The inner casing is based on the suface type. The outer casing's color is based on the classification of the highways (highway tag), and the outer shape of the line based on the smoothness tag. Additional features include displaying intermittent waterways. In many areas, rivers and streams may dry during different times so we made a lighter color compared to the normal waterway. There's less emphasis on features like administrative borders and cemeteries that are rarely modified after their creation.

For use in JOSM, simply add the following zip file to the Map Style Settings in JOSM's Preferences: http://ubuntuone.com/252trPHQ7upvvFXtcAXLF5

This Style is hosted at https://github.com/hotosm/HDM-JOSM-style

We encourage any contributions, forks, or feedback on our github page.