Last week we launched a new Version 2 update to the “Tasking Manager”. This popular tool created by H.O.T. allows people to view a set of “projects” describing recent humanitarian mapping work, and join in with the mapping by taking a task. It’s a coordination tool for the community, and an easy way to for new people to figure out “where should I start?” when it comes to contributing. The new version of this tool is up and running now at the usual home: 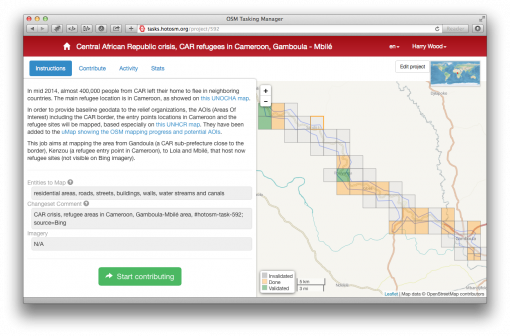 Many thanks to Camp to Camp and particularly Pierre Giraud for their hard work and ongoing support of the OSMTM, a pleasure to work together.

The launch follows 6 months of discussion, work, and support. Desire to improve the OSMTM has always been high, by developers interested in HOT, and organizations working with HOT and using OSMTM. But it was difficult to know where to start. Two years of use had suggested a complete rewrite of the code, a v2, and Pierre had started on that about a year ago. Without time to focus on it, the lead developer Pierre Giraud had only spare time for coding, and often only in the heat of an activation.

George Washington University has been using the OSMTM in their course work, and won a small grant to improve the experience. We went stone soup style, and gathered a “consortium” of other organizations who had a bit to contribute with project guidance and financially. Along with consultation with the HOT community of activators and developers, the decision was made to switch to V2, and prioritize a number of features. Going this route of 5 different funders was certainly complex, but with such a good group of people, all passionate about the tasking manager and HOT, it turned out easy. And hopefully, a repeatable pattern for other needs within HOT. Our massive thanks to USAID GeoCenter, USAID Office of Transition Initiatives, World Bank GFDRR, American Red Cross, and GWU.

So please enjoy using this new and improved Tasking Manager. You can report any very specific bugs/issues using github. There’s also some ongoing discussion on the HOT mailing list