How rugged, portable AWS servers can be used for post-disaster imagery operations.

This blog post shows how rugged, portable Amazon Web Services (AWS) servers can be turned into a kit that’s mega-powerful, deployable, and purpose-built for post-disaster imagery operations. This can help humanitarians and government agencies to more accurately and efficiently conduct damage assessments and identify hardest-hit areas, potentially making a real difference in the aftermath of a natural disaster.

Overview: So what is this thing?

I was recently at the Amazon Web Services (AWS) Public Sector Summit in Washington, DC demonstrating a rugged and portable (47 lbs!) piece of hardware that had been transformed into an incredibly powerful offline aerial imagery catalog, processing tool, and data-sharing device. With support from DroneDeploy and AWS, we were able to put together a fully offline, field-deployable version of OpenAerialMap (OAM) and Portable OpenStreetMap (POSM) running on an AWS Snowball Edge. While not yet available off-the-shelf, we envision this as a powerful combination for disaster response activities.

The souped-up Snowball Edge enables a workflow for capturing, annotating, collecting, and producing post-disaster assessments. It combines imagery browsing and analysis capabilities of OAM with DroneDeploy’s real-time stitched maps, and POSM’s information management capabilities and mapping tools This enables responders to generate and share detailed real-time maps and assessments in the field.

Here’s how it works:

The AWS Snowball Edge has many unique qualities that make it the perfect piece of hardware for this purpose. We chose it because it features: 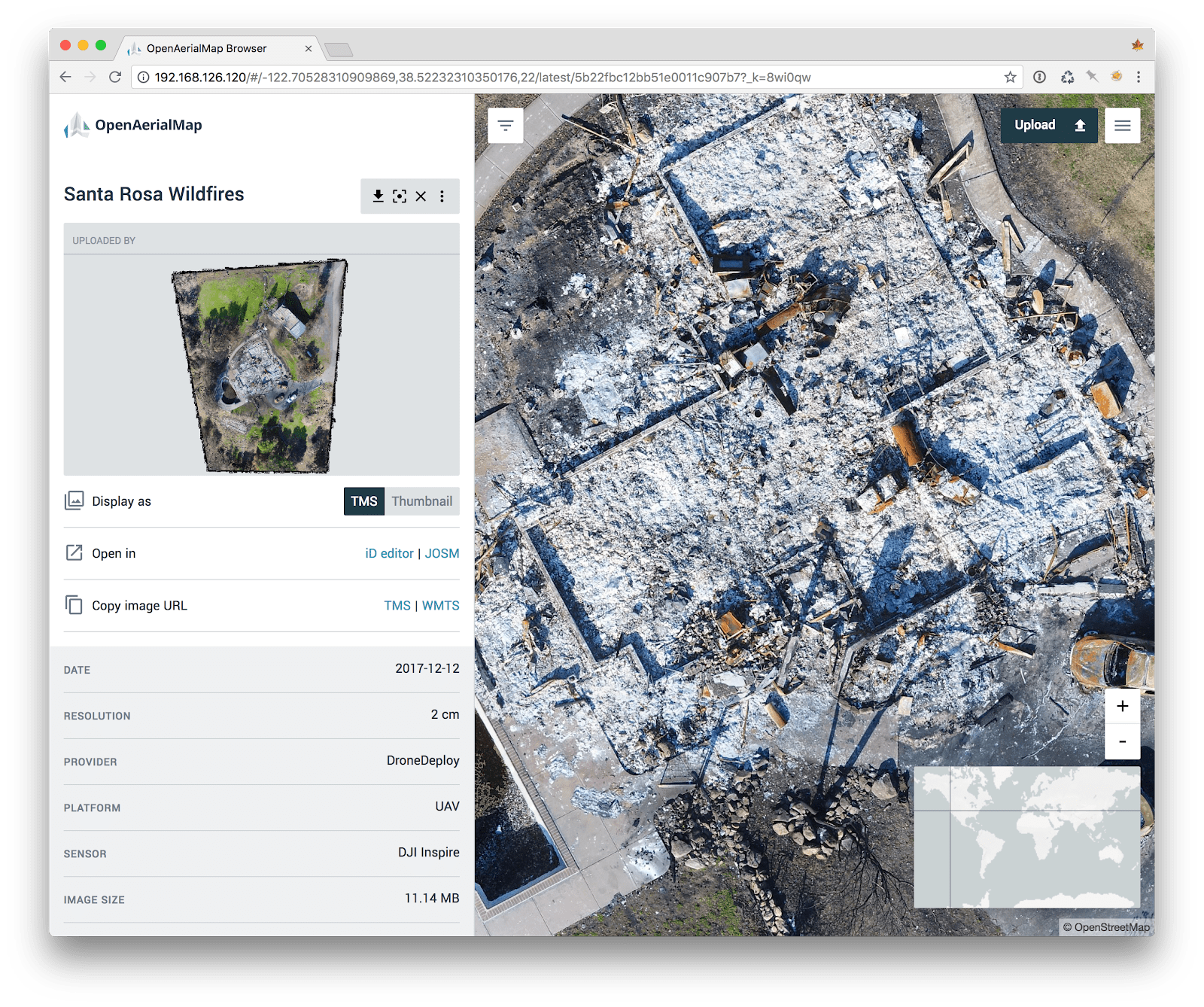 Imagery from DroneDeploy showing conditions in the wake of the October, 2017 Santa Rosa wildfires in California. 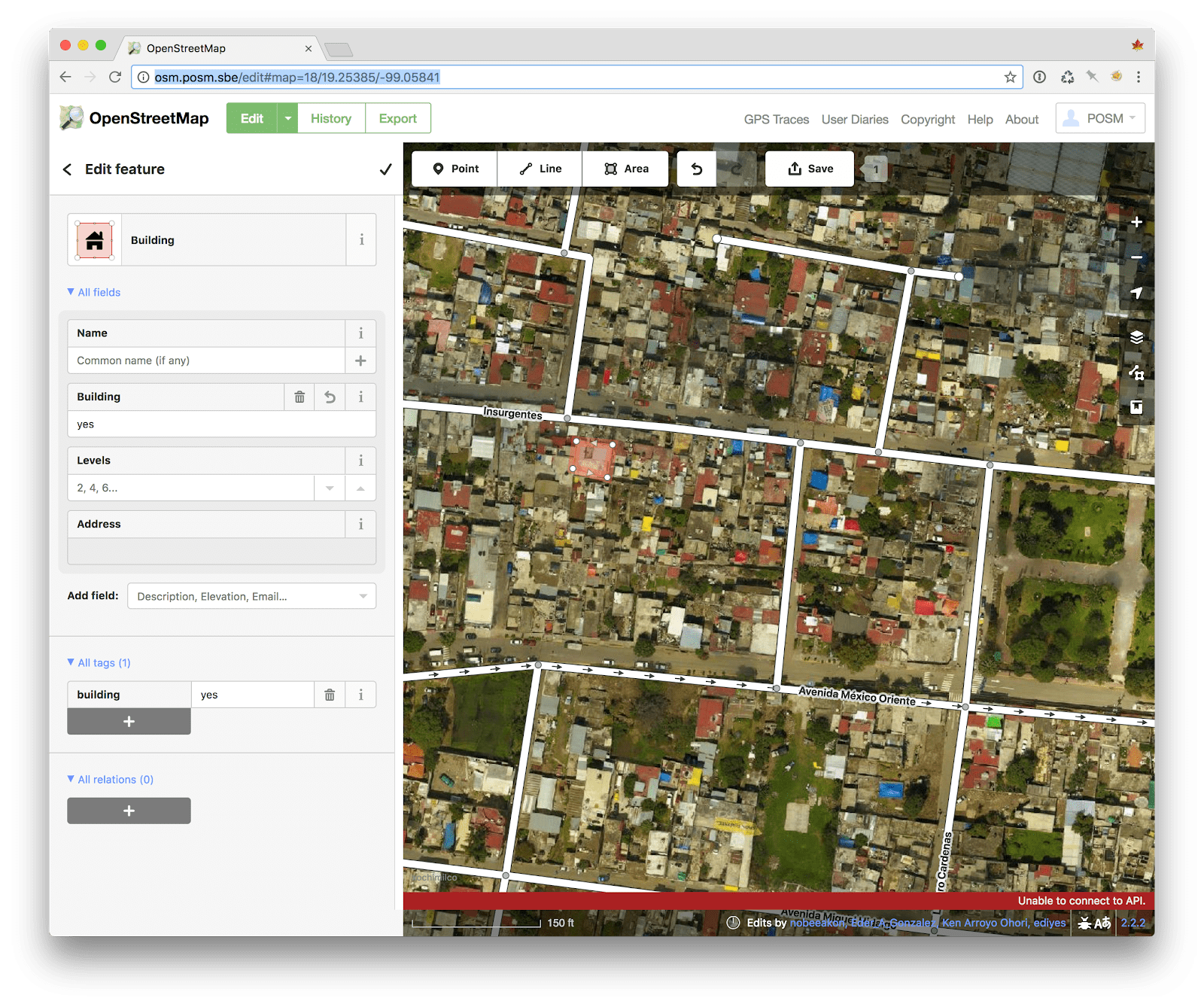 Imagery from DroneDeploy showing a damaged alcaldía in Mexico City after September, 2017’s earthquake used within OSM’s iD editor, which is included as a component of POSM.

We shared a booth with members of the newly-formed AWS Disaster Response Program (DRP), who also hosted an AWS Snowball Edge demo of their own. The AWS DRP enables customers to focus on mission-critical functions; the AWS Disaster Response Action Team (AWS DRT), comprised of AWS technical experts, will provision critical data and applications for disaster-responding customers, transport hardware to their base of operations, and implement a deployable infrastructure to meet the customer’s needs during a disaster.

Our OAM/SBE demo was an “art of the possible” concept; it’s the type of solution that the DRT could help deploy. The demo project shows one way in which the open source tools we develop can be quickly deployed to facilitate completely-offline workflows through services like AWS as they increase their “offline cloud” footprint. We believe this kit has great potential for use in disaster response operations. It is not fully “off the shelf” ready at the moment but with further funding and investment we’ll look to bring this tool the last mile.

For more technical audiences: How does this thing work?

The AWS Snowball Edge allows prospective users of these tools to “create a job” (in AWS parlance) after a disaster strikes, which will provision a 100TB ruggedized device with content from S3 buckets–large volumes of satellite imagery showing pre- and post-event conditions. The AWS Snowball Edge will then be shipped out by AWS and can be further transported by other means (I checked the Snowball Edge on my flight from Oregon to Dulles). Once on-site, all that’s needed is to connect to power and a local network. A generator and and a mesh network (no internet connectivity necessary) would suffice.

Satellite imagery acquired ahead of time can be browsed locally with OpenAerialMap, inspected with QGIS, and traced into offline OpenStreetMap using POSM (easily pre-loaded with data for the affected area).

Geographic areas identified for additional attention can be identified, informing UAV pilots where they should plan their flights with DroneDeploy. Live Map will produce ortho images from UAV flights in real-time.

These ortho images can be loaded into OAM for overhead, visual assessments and further annotation of offline OpenStreetMap data using the suite of mapping tools included with POSM (iD Editor or JOSM).

Areas that require field visits can be identified using imagery and OSM data and provisioned as OpenMapKit deployments. This then allows staff and volunteers to engage in field assessments using standard OpenMapKit/Open Data Kit and Field Papers workflows.

Data that’s collected in the field can be merged with existing OSM data and turned into printed maps using QGIS or Field Papers.

When a field deployment has completed, the AWS Snowball Edge is powered off, turning its Kindle Paperwhite-powered status display into a shipping label, and returned to an AWS region where data that’s been created in the field and added to the local S3 buckets (UAV imagery, augmented OSM data, and ODK submissions) will be copied into internet-accessible buckets for subsequent use and analysis.

We believe that this solution has a lot of potential to allow organizations to embrace fully offline workflows, complete with access to large quantities of imagery and tools to collect more. We hope to expand and polish this more, including investigating how other open source tools like OpenDroneMap and Tasking Manager can be integrated. Over the next few months we’ll be working with groups like WeRobotics to test this further and document how Portable OpenAerialMap can be made available for disaster response.

Want to dig into the technical details? I’ll be posting a full technical dive once I’m able with a rundown of how we went about getting everything to run within the Snowball Edge. Taking imagery and tools fully offline is a technical challenge and, as always, there are limitations. If you’re interested in working on this, contact me and we’ll get you involved.