Last April 2012, it merely took a couple of hours for Augustin (or Gus) to decide to volunteer six months of his time for HOT. He made this decision during the first HOT/OSM workshop that I facilitated at the Engineering School of Ecole Centrale Nantes (ECN). This workshop was part of series of HOT/OSM lectures in academic centres that I have been facilitating in France. Gus’ role with HOT started quickly in Plaisians, this last October 2012 by with others from the HOT Team facilitating the training of the volunteers of the EUROSHA project HOT is leading with 8 European NGOs. After the EUROSHA training, Gus continued to prepare for our next deploy through self training, documentation, administrative work and hardware procurement.

Our deployment in Dakar kicked off with one week of HOT workshops at InnovAfrica2012. InnovAfrica2012 is an event for networking and learning about initiatives on technology and social innovation for development.

HOT was invited by Sylvain Lemaire from Imagination For People and with the support of Karim Sy from the co-working space JokkoLabs. Both of whom both organized the event. The event was attended by mixed crowd of Senegalese and West African people. HOT came across friends met during the past missions, and build new relationships in those intense days. The interest we generated allowed for the OSM training to happen the whole week and not only during the two initial slots planned upfront. New individuals got started and remained with us working all days, surveying, editing, building their skills and teaching at their turn with Gus. Gus rapidly stepped in leading most of the workshops in the chaos and moving environment of InnovAfrica where training places kept changing like in the first days of a crisis response on-the-ground. Ziad Maalouf, Simon Decreuze both journalists at Radio France International (RFI) covering InnovAfrica for L’Atelier des Medias got interested by our work and this emerging OSM SN group which got featured in their coverage (InnovAfrica 1, InnovAfrica 2). There is no closing at any InnovAfrica, the events linked one to the other, and the network itself is meant to be a continued forum. Next year gathering will be in Ivory Coast and it’s very likely that in this country like in other Western African countries, our trainees will have improved upon the map and grow the number of mappers. 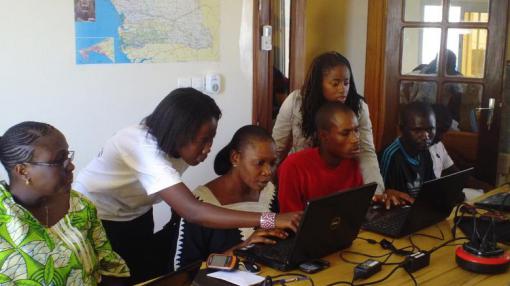 Awa and Monique training at InnovAfrica

We decided to work with the Senegalese mappers that we met during InnovAfrica to consolidate the group and organize our next two weeks so that Gus can work with skilled facilitators from the OSM SN community in the main hubs of the OSM SN project throughout the country. Thanks to the support of Stefano Amekoudi, this happened at the Campus Numerique Francophone of the Agence Universitaire de la Francophonie (AUF), one of the hub of the OSM project in Dakar. Together, we decided to focus in our Senegalese strongholds, Dakar, Saint-Louis and Louga, as well as Thies and Ziguinchor where contacts were established for future work. In each of these cities, we decided to operate from a base, typically a hub made available by our partners, and combined with training, map the cities neighborhood by neighborhood. Gus and HOT remotely would organize these programs in close articulation with the local mapping groups, who would be responsible for their own implementation. Gus would rotate from city to city, and work with the mappers directly or remotely with the help of any interested and willing members of HOT and OSM. Eventually this can happen through the HOT mentorship program started with the EUROSHA project.

This building of local groups through “training by doing” will also harness on relations established with Academic Centres. In those centres, HOT/OSM would be lectured upon and used in learning and researching activities. In turn students, teachers and researchers will join back the emerging OSM local group. Internships or job opportunities from organizations who would eventually switch to OSM, as a result of our continued outreach to them, will create another layer of incentives for an entirely voluntary mapping effort. Internships as well as paid projects will foster learning, acquiring professional experience by local mappers, as well as improving the OSM map, enlarging the number of contributors, and consolidating future professional use of OSM by organizations willing to take this road. 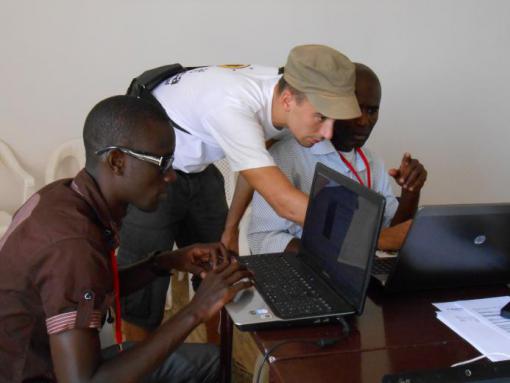 With the mappers from OSM SN we got started on this plan in the first two weeks of December. In Dakar, we started to train and map in the commune of Grand Dakar (WikiProjet GrandDakar, HOT Tasking Manager Job Gand Dakar) with the support of Jean Marie and Ismaila from its Service Technique. In Dakar, the University Cheickh Anta Diop (UCAD), the BTS in Geomatics of the G15 (an academic structure) as well as JokkoLabs and the Digital Campus of AUF form the backbones of the OSM SN ecosystem. With other groups like the CTIC, Ker Thiossane, they will be part of this mapping project. In Saint-Louis, we were hosted by BantaLabs in their co-working space where we trained and started mapping two neighborhoods, Ndiolofene and Ile de Saint-Louis. It felt good to turn into reality a plan sketched with Joeri and Isseu of BantaLabs that I met when attending the TechCamp Dakar 2012 this past late August 2012. Students from the University Gaston Berger (UGB), our second main partner in Saint-Louis, were also active in this mapping party. With all groups, we drew plans for these activities to continue in 2013. From Saint-Louis, we drove to Louga and worked with Madicke Seck from the GERES with the local OSM group. 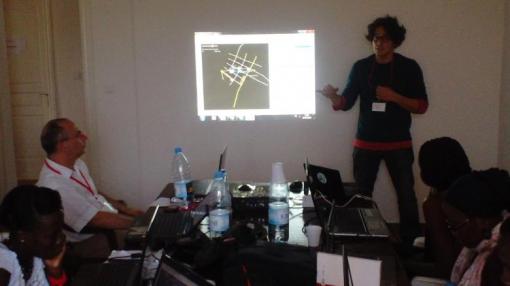 Nico training during the trip

At our return in Dakar, from our trip North to Saint-Louis and Louga, Gus and I remained focused on increasing his readiness to animate the OSM SN community, strengthen our ties with partners in town and organized Gus’s future presence to Thies and Ziguinchor. In the first city a BarCamp was planned for late December 2012 which seemed to us the perfect way forward for OSM. We managed to squeeze in our schedule a 4 hours workshop, at the Digital Campus of AUF, with Oumar Sall and Ibrahima Mbaye from the University of Ziguinchor. This resulted into a future trip to the regional capital of Casamance planned for January 2013.

I’d like to finish the post about OSM SN by thanking our friends and partners, the many Senegalese mappers active in their country and by a special thanks to Gus for his hardwork and flexibility during this first mission in Senegal and his continued work from which you will read soon and that you can follow on HOT mailing list, as well as the OpenStreetMapSN Twitter and Facebook Accounts.