I spent a week in Dakar preparing with some active mappers of the OSM SN community the attendance of the Thies BarCamp organized by the Senegalese OpenSource movement.

I spent a week in Dakar preparing with some active mappers of the OSM SN community the attendance of the Thies BarCamp organized by the Senegalese OpenSource movement.
Together, we harnessed on the partnerships built with academic actors from the fields of Geography and GIS/Cartography and principally the BTS in Geomatics of G15. They are natural partner of OSM and have been expressing a long and continued interest since May/June for the OSM project. It is perceived as a way forward to the challenges they are facing in terms of access and existence of sound high quality GIS data in this country. Both teachers and students showed passion, enthusiasm and dedication for OSM, opendata and open-source and their possibilities. An example of this is participation of 25 first year students of the BTS in Geomatics to a training that I facilitated with Ismaila and Diakite. Both teachers and Management of G15 showed an extra support by funding the travel and attendance cost for 16 students to the Barcamp Thies 2012.

Three days afer the training, the 16 of the G15, with the support of their teachers, decided to join BarCamp Thies 2012 and started mapping remotely the city during 2 days and one night. Despite the fluid and chaotic environment of the BarCamp, difficulties in internet access, in getting fed, figuring out workplace in a changing working environment, the OSM SN community by proposing a continued, rich and rewarding activity emerged as one of the pillars of this barcamp. 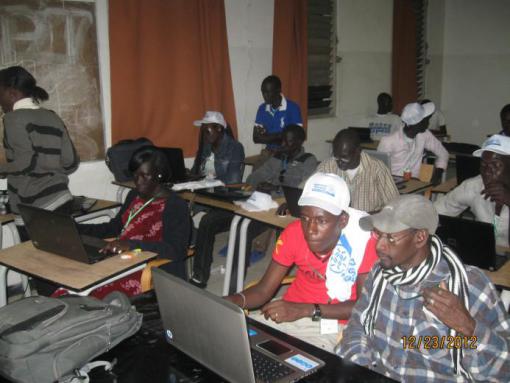 Awa, Ismaila and Cassis'great facilitation during those two intense days allowed our attendance of the BarCamp to develop into the forming of a local OSM group in Thies. Our presence at the barcamp got media coverage by Carrapide and Radio Television Senegal (RTS). We built frienships with various groups: DakarLug and ThiesLug (OpenSource communities), Centre de Recheche et d'Essais de Thies, l'Ecole Superieure Polytechnique from Thies and l' Ecole Superieure Polytechnique de Dakar. The linkages with the last two academic set ups will lead to future training and the emerging of local geography student clubs. Given this interest, I decided to stay in town and follow-up with the Thiessois helping them to consolidate the skills they gained through the bar camp so that they can lead the mapping of their City and the building of a local group. I also engaged with structures who expressed an interest around OSM to firm up future trainings and meetings in Thies the next year.

I then headed back to Dakar, where I recovered and started preparing with a few local mappers the first mapping event of 2013 set forth in Saint-Louis (Ndar in wolof). It had been organized with the co-working space BantaLabs, one of our partner in this city with the University Gaston Berger (UGB), and formed one of the first major event of their programme Ndar Numérique. This initiative aims at fostering ICT for development in Saint-Louis and its region through awareness events and support of a few open-source and open-data projects of which OSM is part. This is then from BantaLabs, which served as a base camp for OSM SN in Saint-Louis, we prepared BantaLab staffs to step in and facilitate with me and other mappers from Dakar the mapping party of 12/13 January targeting the UGB students. 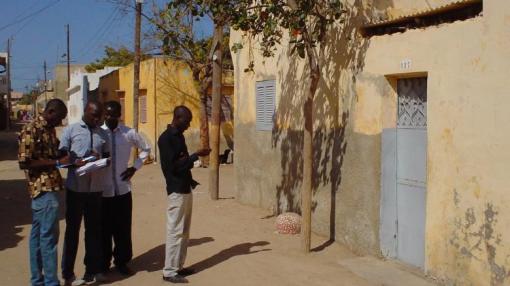 In parallel, training with UGB GIS teacher around OSM and communication towards students and the Geographic club of the university were run. Prior the WE, I had the chance to reach out to Agence Regional de Developpement (ARD), Caritas Saint-Louis and St Louis Finance, a microfinance company, and discuss about further uses of OSM by these organizations. 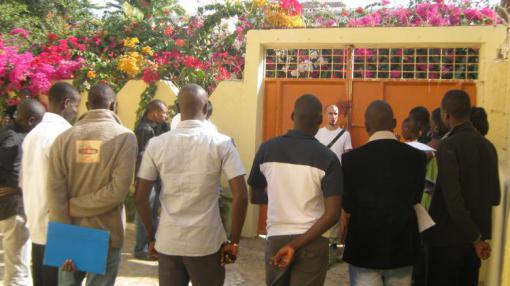 The event went well and is inspiring for the future OSM SN in Saint-Louis: it was mostly facilitated by BantaLabs staffs and Seydou from Rufisque and mostly attended by Geography students also enrolled in the Geography Club of the University. The training continues the day afer on Sunday in a smaller group and ended at night with BantaLabs staffs.

Back to Dakar and next steps

In my long journey back to Dakar, I started realizing the amazing potential of this newly formed group up in Northern Senegal where form the Saint-Louis stronghold, it will be possible to support the growth of the local OSM group of Louga, and expand in the Ferlo and along the Senegal River. I got distracted by two stops from the Customs Officers and had to open up the pelican case for a through inspection of all the items of my HOT hardware kit. 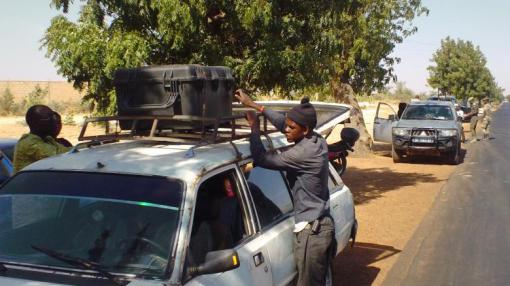 This shifted my focus and thoughts towards what is profiling in prior the next mapping party at UGB planned 31-January with the Department of Geography. We will start a local group in Rufisque near Dakar and then five of us will travel to Ziguinchor where we have been invited and all our expenses covered by the University to deliver a 5 days workshop to teachers and students in the associated digital campus of AUF. At the idea of being on the ship leaving Dakar harbour, I fell asleep and woke up at my base in Dakar set in the College Sacre Coeur.

Special Thanks to Nico, Stephane and Will for the strong ecosystem and relationships they built in Senegal during the two past missions. Special Thanks to Nico and Severin for their remote activation and support at any time, to all the Senegalese facilitators, nothing would be possible without their dedication to work, to our partners.