OpenStreetMap began with people walking, biking, and driving around their neighborhoods, surveying data using GPS to map. Starting in 2007, satellite imagery became available for OSM volunteers to trace features, complementing on the ground survey. Imagery was first provided by Yahoo, and presently through Bing, two companies generously taking a chance with our wild idea to voluntarily map the whole world. In the early days of OSM, Mikel Maron started promoting the idea of using OSM for humanitarian purposes. 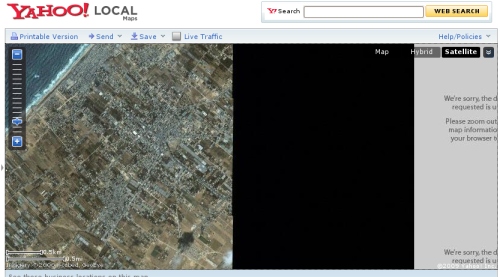 Imagine the practicality of traveling around mapping by GPS after a disaster has struck an area. Satellite imagery becomes vital to see what may not be easily accessible on the ground. The first “activation” of what became HOT began with the OSM community raising nearly $6000 to purchase satellite imagery of the Gaza Strip from Digital Globe, in the midst of the 2008-9 Gaza-Israel crisis. Yahoo imagery was incomplete over Gaza, and out of date, and we needed comprehensive and current imagery to create a detailed base map for the humanitarian and media response. In the process, we learned the hard way of the ins-and-outs of negotiating derivative rights compatible with the OSM license, and how to process and host imagery for tracing, as well as the high cost! The imagery was absolutely crucial to that response.

The importance of imagery availability after the 2010 Haitian earthquake was adamantly expressed by John Crowley, Schuyler Erle and Jeff Johnson at Where 2.0 Conference 2010:

“What we did in Haiti changed disaster response forever. I don’t know if I can overstate that.”

Since that time many improvements have been made in the availability of satellite imagery. OSM has access to imagery they haven’t had before. New methods have allowed this, both new satellites being available and policy to make imagery available from existing resources. Specific to typhoon Haiyan four such methods have made imagery available that would not have been just a few years ago. This post is a starting point for the HOT community to better understand the greater and recent history of our access to imagery.

Imagery to the Crowd

An initiative from the United States Department of State Humanitarian Information Unit (HIU). Imagery to the Crowd allows use of the US Government’s commerical satellite imagery data license known as Next View, for creating derived works in OpenStreetMap, for humanitarian purpose.

HOT can request imagery with the following use case criteria:

To put it simply, we need to show what we want to do and why it will help responders.

Next View licensed imagery was publicly released for 30 days on the DigitalGlobe website through the expanded Enhanced View license. This is the first every such public release of this type of imagery. This allows anyone to use the post-event and some pre-event imagery of the area for any non-commercial application being used in the response.

Astrium launched two new high resolution satellites in 2011 and 2012. These satellites are capable of providing 70 centimeter resolution imagery. Astrium made available under a public domain license the imagery from these satellites for use in the response to typhoon Haiyan.

Landsat 8 is a US Government satellite that began full operation on May 30th 2013. Providing more detailed imagery than Landsat 7 this satellite covers the earth every 18 days. Imagery obtained from Landsat 8 is always free to use and in the public domain.

What is Needed Now?

Much imagery has been made available, but it does not cover all the areas affected by Typhoon Haiyan. Continued imagery will need to be available to help as the response moves into recovery.

What Responders Can Do

Responders request access to imagery all the time. If you use the OSM data and want it to be more detailed, simply include in your request that you want the derived products to be compatible with the OSM license and the OSM community to have access to create those derived products.

What the Community Will Do

The OSM Community has already made a huge effort with over 1600 contributors making over 3 million edits to help create basemap data of the Philippines. This community will keep on mapping as long as there is information available to be turned into map data. If you can help provide us with imagery we can help create the base data needed for response.

To help future efforts, HOT needs to collect impact stories to support our continued efforts. If you have used OSM in the field or have contributed to this response, tell us your stories. We welcome video stories, guest blog posts, quotes and etc.

Thank you to all the contributors, supporters, and quiet negotiators who have lead the charge to unite all these efforts. Without you, there would be no updated map. Simply stated: You are changing this every step of the way.