South Sudan is currently a top humanitarian focus if we consider the number of publications over the week on ReliefWeb.

Since violence increased in the country by the end of December, we started monitoring and working to provide baseline data for the humanitarian response.

So far, South Sudan was not a country extensively mapped in OpenStreetMap, and a lot of work remains to get the same completeness as a country like Central African Republic (whose situation will be presented in another post). It will take time to have consolidated data regarding road networks, residential areas and location names.

Our main target for the moment, as for the Philippines after Haiyan Typhoon, is to get the most affected cities mapped in OSM, using the HOT Tasking Manager. Some humanitarian staff working in the country suggested additional cities to us. The objectives, their current state and download links to get the data in GIS formats, are presented in the South Sudan OSM wiki page. You can also find a download job covering the whole country.

Bor, in Jeglei State, was the first job to be started and just came to an end. Thanks to all the OSM mappers (at least 22) that contributed! Bentiu is still ongoing. Juba (country Capital), Malakal (a state capital) and Mundri (a county capital) will be the next targets.

For Bor, I used a global validation process I am testing and will document, not only in order to correct mistakes or add some missing features, but above all to get a more consolidated result from the contributions of all the mappers, everyone having different habits of mapping and tagging, especially regarding the road hierarchy. I applied the Highway Tag Africa scheme that has been discussed and used since the HOT Activation for Mali and has the advantages of being easy, clear, and adapted to the road networks in Africa, and actually to developing countries in general. In my opinion the resulting map makes the geographical context easier to understand. 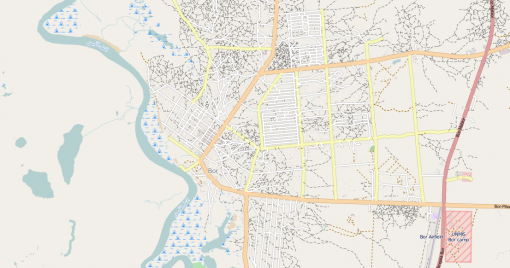 During the following days, we will continue with the remaining tasks and we may get access to recent imagery, enabling us to also map the IDP camps. Anyone that would like to join the mapping is welcome, as are any suggestions or mapping requests!