This week we started the series of OSM training/workshops to various government stakeholders and international agencies based in Lilongwe. Severin started this coordination through his meetings with various offices last week. The goal of these sessions is to engage with various government offices specifically the Surveys Department and the Disaster Management Affairs (DODMA) on how to contribute and use OpenStreetMap. The participants will also join the planned fieldwork activities in the coming weeks to assist the team in the training and field data collections to the two southern districts along the Lower Shire Valley.

We started the Monday workshop with the selected participants from the Survey Department. We did a full crash course of all the sessions from user account creation, advance editing tricks with JOSM, to the use of HOT's export tool. The idea is for this group to get started with OSM quickly and to assist the team in the next days of training to a much bigger group as facilitators.

By the next day, we started the workshops with a bigger group composed of several other government agencies, international humanitarian agencies and academia. Unlike the previous day, this is a 3-day workshop to introduce OSM to the other stakeholders. The participants from the previous day assisted the team as facilitators of the sessions. We've covered most of the basic of OSM editing through JOSM, Bing imagery and the new version of the Tasking Manager. 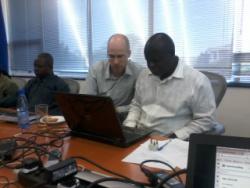 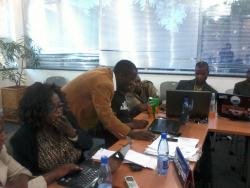 We continued the sessions on Wednesday focusing on the use of the Tasking Manager and practicing the numerous plugins and trick in JOSM. We also splitted the group into two. The larger group continued with the OSM sessions with Severin while I facilitated the MASDAP session along with the MASDAP administrators from the Survey department and DODMA.

MASDAP is Malawi's Spatial Data Portal managed by a core team of administrators from various agencies. It is a free and open source geospatial data portal based on GeoNode and Geoserver. Key geospatial data are available within the portal that is available for download by the public.

We approached the MASDAP session in a hackathon style where we first discussed how is MASDAP used in Malawi and outside the country and what features or data needs to be included. Each member then identified what feature or topic they will work on. By mid-afternoon, we were able to address several concerns, which are: 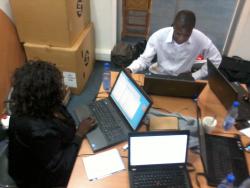 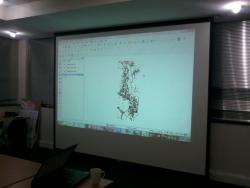 The highlight of the day was when the MASDAP team presented the results to the bigger group doing OSM editing in the last 2-3 days. The previous edits the bigger group did in OSM are now available as data layers in the data portal.

The MASDAP team was impressed at how they can rapidly integrate OSM data into the data portal and the potential of OSM data to complement the existing data layers available in MASDAP. By the end of the hackathon, we identified additional concerns which we intend to resolve in the coming weeks.

We did not have a training session on Thursday, instead, we joined the Malawi GIS Group meeting hosted by the Surveys Department. This informal GIS Users Group is a venue for the GIS practitioners in Malawi to exchange knowledge in the use of GIS in the country. We presented OSM and our mapping project which sparked interest to many of the attendees.

In the afternoon, we also joined as guest to Malawi's Interim National Geo-information Committee (NGIC) meeting. The NGIC is a multi-sectoral committee composed of government agencies, private sector, academics, civil society, media, professional organizations and its international development partners chaired by the Surveyor General of the Ministry of Lands, Housing and Urban Development. The committee discussed several concerns on the promotion and coordination of geospatial activities in Malawi focusing data cataloging, data standards and, data sharing. The committee while very young, looks promising and I feel OSM's tools and data can greatly help in their goals.

We also got news from our WB representative that our HOT kits have finally arrived!

Friday was the last day of the OSM workshop here in Lilongwe, we quickly unpacked the HOT kits and prepared for the day's field mapping session. Using FieldPapers and the shiny new Garmin eTrex 20. We divided the whole group into several mapping teams to map the surrounding areas, according to their interest (buildings, roads and paths, sanitation). The teams returned by the afternoon to edit the data collected in the field into OSM. 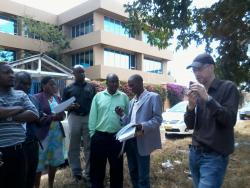 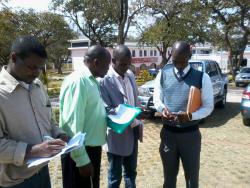 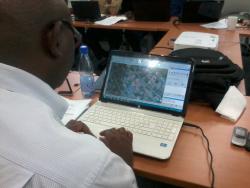 We ended the day with the planning discussion on the succeeding weeks where we will train more people and collect field data in Chikhwawa and Nsanje with the help of the participants who joined us this week.

This was a very fruitful week for me here in Lilongwe. The sessions not only allowed me to share things that I love to do in OSM to the young and enthusiastic group of mappers in Malawi but more so, I learned a lot both from Severin and the participants. Malawi's geospatial community is still very young and has similarities to the concerns of the Philippines on geospatial data use, promotion and sharing. I am hopeful that our project will complement these efforts especially when we start the field mapping in the Lower Shire.

There is now a TM Job for the Chikhwawa district in preparation for the up coming field work. The participants in the workshops have started editing residential areas, roads and waterways.  We invite everyone to help in the remote mapping. A new talk-mw mailinglist is also online to coordinate the mapping efforts for the country.

Today, we will pick-up Emir from Indonesia at the airport just in time to celebrate OSM's 10th year birthday with the complete team of fellow hotties and looking forward to building the community of OSM in Malawi.