What about the CAR Activation?

First of all, the OSM data is more and more used by the humanitarian responders. A series of town maps have even been made by UNOCHA for Begoua (Northern part of Bangui), Kaga-Bandoro, Mbaïki, Boguila, Sibut, Nola, Paoua, N’Dele, Bouar, Bossangoa, Boda, Bambari… Internews renewed their Crisis Map for CAR and it now includes OSM as the map background, as you can see here. Regarding the data, what has changed during last 6 months? Below is the state of the OSM Map over Central African Republic. 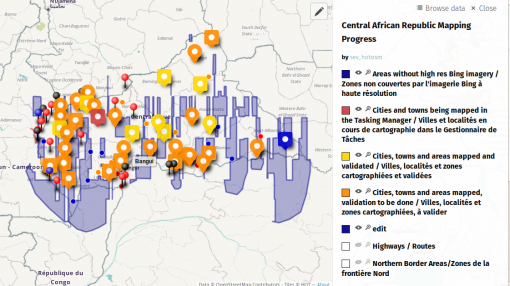 It shows that the largest administrative centers are done, even Obo (the blue squared dot on the East) has been partially made with the medium resolution MapBox imagery (residential area, main streets and main buildings as landmarks). Our partners from HIU are waiting for an available, non-cloudy imagery through the MapGive Project. But in the meantime, it does not affect anymore the routable data. Remain only a few, small sub-prefectures, that we will finish when more important areas of Interest are done.

Indeed, during the last 6 months, the population threatened by violences moved a lot inside and outside the country, and the number of CAR refugees in neighbouring countries increased dramatically, especially in Cameroon (+200,000) and Chad (almost 100,000), as shown on the last UNHCR CAR Emergency Situation map. The Refugees Entry points (cities or towns close to the RCA border, either in the country or in the neighboring ones) and camp locations have been checked on OSM and sometimes identified (red pins) or not (black pins).

Considering we do not have imagery for these refugee camps, we have started to focus on the areas between an Entry point and the supposed, approximate or known location of the camps to map the whole corridor and towns. We started with Gambula to Mbilé then Garoua-Boulaï to Meidougou. The latter one was maybe a bit too extended, and It has been launched Early August when the Ebola crisis rose up, consequently the number of contributions have decreased for the CAR Activation and it took a long time for the job to be achieved. Thanks to all of the contributors for this task (at least 44 according to the TM job stats). We will now continue to map other refugee areas and continue get information to identify the missing locations, starting with a new job over Gbatoua. It is more and more easy to connect with humanitarian stakeholders, as they are impressed by the data we all contribute to provide them in all the crisis activations.

Among the mapping tasks to be done, the import of UNICEF data has been achieved for schools, remain only the potable water points. The interest if two folds: for the water points themselves, but also for the place names they all include and often missing in OSM. As importing data requires a bit of experience, the job is not open to everyone, please send a message to the hot list if you are interested. Below is what looks like the job as of today. When you pick up a task, you will both download the OSM data in JOSM in one layer and the UNICEF data covering the square in another one. It is a good experience, different from mapping building and roads on imagery, with a specific workflow. 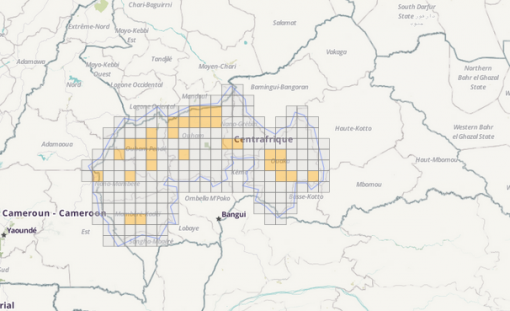 Another job to be released very soon, thanks to Pierre Giraud and the awesome new possibilities provided by Tasking Manager version 2, is a new kind of jobs to map road networks on a systematic way in comparison with a reference layer. But this is another story for another blog post.

Thanks again to all the contributors for this Activation, there is no other data source over Central African Republic as detailed and consolidated than in OSM, and it will be a great input for the long reconstruction this country will have to face.