Last week we had a television interview, with me appearing alongside Andrew Braye from the British Red Cross, and with Pierre Béland joining us over video link. This was a brief segment about the Humanitarian OpenStreetMap Team on a show called “Global” on BBC world news.

It’s always a pleasure to have the opportunity to promote HOT like this, but it’s also nice to be so closely represented alongside well known charities like the British Red Cross, by virtue of our close collaboration on the ebola response mapping work. I think Pierre Béland joining us over video link from Montreal, nicely underlines the global aspect of our collaboration as well. Pierre has worked alongside Andrew Buck, to coordinate the community mapping efforts during this ebola response, but of course we have people getting involved with contributions large and small from all around the world. Hopefully more so when we appear on global TV channels like this! 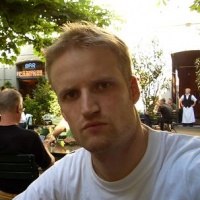