Already for a big week now, Pete Masters and I have been in Bangladesh for the first official field mapping of the Missing Maps project. Bangladesh is a country in South Asia surrounded by India and touching Myanmar’s border in the east. It has the longest coast line in the world, as people tell us very proudly here! We are working in the capital, Dhaka, where more than 15 million people are living. And coming from a country like Belgium, with only 11 million people in the whole country, it leaves you pondering… Despite so many people living in Dhaka, you find a lot of blank spots on the map, especially in the more informal, crowded and, therefore, difficult to survey areas.

In this Missing Maps field mission we are focusing on two of the most vulnerable areas of Dhaka: Hazaribagh and Kamrangirchar. Kamrangirchar is a big informal neighbourhood which has slowly upgraded over recent years, but still consists of a lot of smaller and bigger slum areas. It is located in a peninsula area of 3.68 km² with an estimated 400,000 inhabitants. The area is bordered by the Buriganga river. Every day the Buriganga receives large volumes of untreated effluent coming from the tanneries localized in the neighbouring area of Hazaribagh. In Kamrangirchar, as in Hazaribagh, many workers are exposed to poor working conditions in an environment of harmful chemical pollution. Hazaribagh especially appears heavily contaminated and highly polluted. 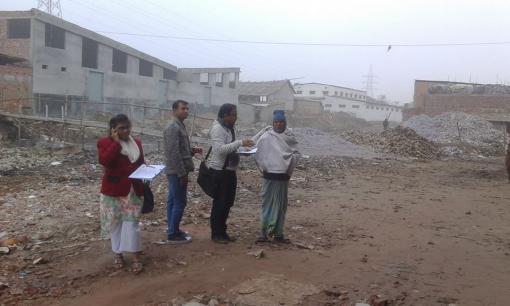 Photo credit: one and only Kumar Milon

So yes, mapping in these areas is not easy… not the remote mapping, and not the field mapping. But, great news… we are getting there! We are about to finish the field mapping of Hazaribagh. Yesterday two teams of our awesome volunteers started mapping already in Kamrangirchar, and today all four of our teams went surveying there. A big thanks goes to all the remote HOT mappers for this, because the crazy difficult mapping you did only from imagery, is a MAJOR help! This was by the way only possible thanks to MapGive who shared imagery services of the two areas. Instead of using Bing imagery of 2010, we could use their fairly recent imagery where the population growth and new constructed buildings are clearly distinguishable. With the remotely mapped data on the smartphones, the volunteers are now able to locate themselves more or less in the tiny golis (small streets) of Hazaribagh and Kamrangirchar. A lot of the alleyways are still missing, but we at least have a kind of base map with roads and some landmarks (as open spaces, trees and big apartments) to get started our field data collection.

Luckily we did not have to start from scratch, because OpenStreetMap is already well known in Bangladesh. For example, in 2010 the community got 5 GPS units from the OpenStreetMap Foundation. In 2012 I did my first ever mapping party with some local Bangladeshi mappers in the Dhaka Zoo and in 2013 they mapped, together with HOT, Old Dhaka for the Open Cities project. A special thanks goes to Ahasan Hoque, a real OSM addict and he really gets things moving! However, although a lot is happening around OSM in Bangladesh, a real get-together community is not quite there yet. But maybe we are taking little steps closer to this now? We (Pete and I) see already huge potential in this community!

So, if you have wild ideas or future plans about mapping in Bangladesh… the local community needs you to move on and they will welcome you like a queen! So please feel free to contact us, or the local mappers, with your wild ideas!