Rural and urban communities in Turbo, a municipality located in the Caribbean coast of Colombia, live in lowlands prone to heavy-rainfall-triggered floods. These communities, mostly consisting of fishermen and their families, are frequently inundated by coastal surges induced by storms. These hazards are being magnified by global warming and sea-level rise. The municipality is also part of the Urabá Gulf, located in the Southern-most part of the Caribbean Region in the vicinity with Panama, one of the wettest in the humid tropics. Some areas of the Urabá Gulf are also being severely deforested by illegal loggers, contributing to a reduction in fishing landings, and to an increase in the negative effects of flooding (see additional information).

High-resolution maps of human settlements and coastal wetlands in Colombia are not readily available to the public and organisations to take action in humanitarian crises related with heavy rains in Turbo, for example those that occurred during La Niña 2010-2011, affecting hundreds of people. After a prolonged period of reduced rainfall (El Niño 2014-2016,) predictions have been made on the return of La Niña conditions on 2017-2018.

Last year, mapping groups in Universidad de Antioquia (Medellín, Colombia) recently joined efforts with an aim to provide an open-source map of the coastal zone of Turbo municipality. The YouthMappers Chapter at the Engineering Faculty partnered efforts with coastal ecologists at the Exact and Natural Science Faculty working in the Urabá region over the past decade. The YouthMappers Chapter gained experience in remote and field mapping in other areas of Colombia using OpenStreetMap (OSM) and participating in other HOT tasks. The combined perspective resulted in submitting a joint proposal submitted to the Microgrant Program, that was selected as one of the funded projects (read full story).

Why are mangroves important for livelihoods?

The main goal of COASTMAP-URABÁ is to put on the map the fishing communities scattered along the 190-km of Turbo’s coastline (with a 2-3 km band). An area of particular interest is El Uno Bay, a peri-urban fishing village severely affected by La Niña 2010-2011. In addition, we aimed to map mangroves and freshwater wetlands within the area because they are important ecosystems for subsistence of coastal livelihoods. These coastal wetlands play a proven role as nursery areas, fishing grounds, and barriers sheltering them from river and coastal flooding (see additional information). The ultimate objective of COASTMAP-URABÁ is to highlight that coastal wetlands are fundamental elements for the resilience of both fishing livelihoods and the entire coastal zone.

Bahía El Uno community is now on the map

Prior to this Project, only the main roads of our target fishing community, Bahía El Uno (El Uno Bay), were mapped in OSM. After a series of remote mapathons held on past July, buildings, unpaved roads and tracks within the proposed 900 ha were mapped. In addition, ca. 230 hectares were covered during a three-day fieldpaper (fieldwork) that involved 14 university-students (Youthmappers Chapter), numerous students led by teachers Ezequiela Tovar-Mercado and William Palacios-Cuesta from a local public high-school (IE Santa Fe-La Playa), additional volunteers from the neighborhood, Gabriel Bentancur, leader of the fishermen association, and Shirley Miller, an architect from the Planning and Disaster Attention Office from Turbo. Participants were involved in collecting GPS coordinates of all houses and other buildings, and interviewed a sample regarding the demographics of each family unit, impacts of past severe-weather events and their perception on the role of mangroves and coastal wetlands. It was a rewarding work! 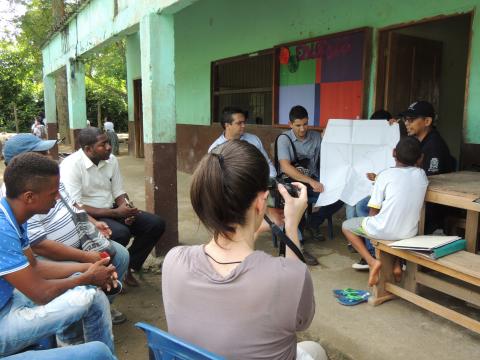 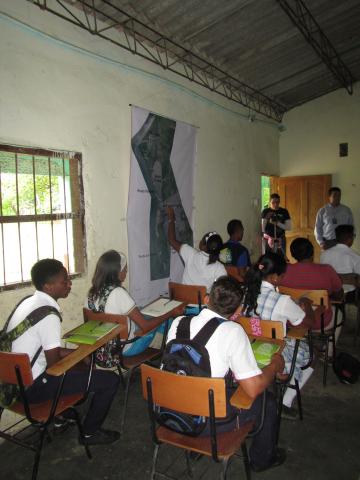 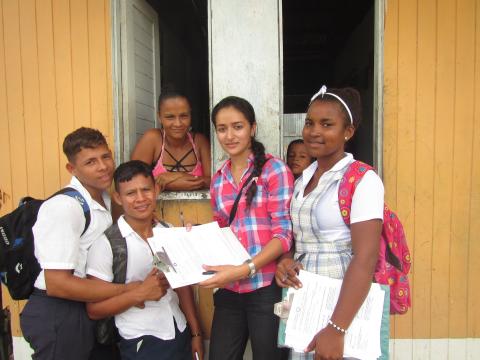 When we started the COSTMAP-URABÁ project in May this year, new members joined the YouthMappers Chapter, including students from various engineering programs and biology. These mappers have contributed to update the state of the map drawing buildings and roads within >600 km2 of the coastal zone of Turbo Municipality, subdivided into 1227 tiles of different sizes depending on their location in either rural or urban areas. Training on OSM continues as part of formal courses in programs in environmental engineering and biology, and it will be expanded to university professors and students in Turbo Campus of the Universidad de Antioquia. Training is also planned for citizens in Medellín, the capital city of Antioquia State, to promote humanitarian mapping and solidarity in case of climatic disasters in the coastal zone. Preliminary results of this Project will be presented at the HOT Summit September 14th-15th, by one of our volunteer students, Ms. Isamar Álvarez. 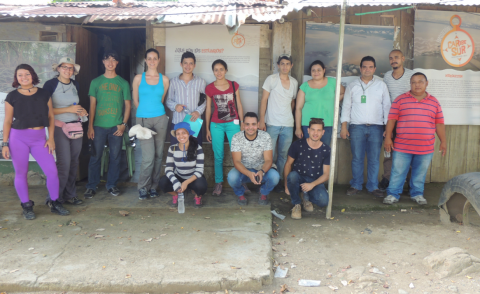 A day for mangroves

Awareness on the importance of mangroves for fishing livelihoods is growing. Last year, a “Day for Mangroves and Family” was celebrated by the largest fishing community settled on the West coast of the Urabá region, also the largest mangrove area (Bocas del Atrato: see video). This year, on 26th July, we celebrated the International Mangrove Day (now part of the UNESCO calendar) with artistic activities in Bahía El Uno thanks to the leadership of the fishermen association and the support of HOT Microgrant to COASTMAP-Urabá, alongside with local authorities (Secretary of Education, Secretary of Agriculture, Secretary of Planning, Board of Environmental Protection-CORPOURABA, House of Culture, and Santa Fe-La Playa High School). We are spreading the word because mangroves, particularly those on the West coast, are unique, fragile and vital (see talk in Spanish to an open audience). Mangroves at the Urabá region are severely threated but we hope that by putting them on the map and by celebrating their beauty and ecological importance, we contribute to sustainability of the coastal zone livelihoods to achieve several of the Sustainable Development Goals.

Photo #6. Legend: Workshop at Bahía El Uno on the use of unmanned aerial vehicle (UAV) for field verification of remote mapping. 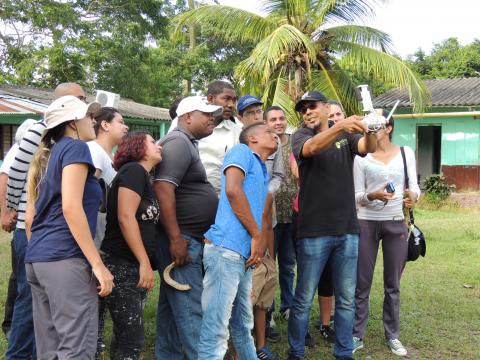