Ten years ago this week, on 12 January 2010, Haiti experienced a devastating earthquake - one of the worst disasters in recent history. Within 48 hours of the earthquake, the OpenStreetMap community started using high-resolution, post-event satellite imagery to map the area impacted by the earthquake, and it would forever change crisis mapping.

Within a month, over 600 contributors volunteered their time and skills to build a basemap of Haiti on OpenStreetMap. It would become the default map for organizations responding to the crisis, including urban search and rescue teams, NGO partners (such as MapAction and iMMAP), United Nations (UN), World Bank, and U.S. Marine Corps.

For the Haitian people, the sadness of the day and following weeks was incomprehensible, but it also spawned an overwhelming desire to help using digital technology to unite rather than divide. This is a characteristic of our movement that is still prevalent today, and a rare find in 2020’s digital ecosystem. Using Ushahidi, teams at Tufts and Columbia universities, and then all over the world began ‘crisis mapping’ – contextualizing and geolocating critical requests in Haiti for help, putting them on a map, and getting that critical information to first responders.

“For the Haitian people, the sadness of the day and following weeks was incomprehensible, but it also spawned an overwhelming desire to help using digital technology to unite rather than divide.”

As recalled by Kate Chapman, HOT’s Executive Director from 2010–15, “HOT was an idea prior to the Haitian earthquake, the difference being was others started to actually believe it after [the earthquake]”. John Whelan, HOT member, reflected on how the response birthed new mapping technology and awareness, “We have the Tasking Manager system that came out of the Haiti response, which isn’t just used for HOT projects, but elsewhere in OpenStreetMap. It also established a way of tagging things, e.g. highway=unclassified,” he said. “Even the less than perfect mapping has saved a few lives. Getting vaccines to the right place, in the right quantities, without any maps or population counts is a problem. With maps – even imperfect maps – it is less of a problem.”

Since then, HOT’s dedicated community has grown to nearly 200,000 volunteers, who have provided life-saving map data for 92 disasters and crises, and mapped an area home to 150 million people in more than 50 countries. In 2019, we made our two millionth edit.

While we haven’t yet achieved our vision, I’m optimistic that we’ll get there: OpenStreetMap’s promise in disaster is now proven, and the future potential to reduce human suffering and improve lives is only as limited as our imaginations.

To mark the anniversary of the Haiti response, two members of our community share their memories:

In 2010 I was less than a year into my new role at USAID’s Office of Foreign Disaster Assistance (OFDA), the United States lead agency for international disaster response. I had just arrived home when my boss called and said there was a major earthquake in Haiti, and to get back to the office. Part of my role was to provide search and rescue teams maps to assist with the response, but the problem was – no current maps of Port-au-Prince existed.

There was an immediate push to collect as much spatial data as possible. As post-event imagery became available, we began mapping the size and locations of displaced persons camps, as seen in the picture below. This was valuable information but an accurate roadmap was still missing.

I had never heard of OpenStreetMap and was amazed when I discovered the community initiative taking place. The immediate value of that effort can never be monetarily quantified but the impact changed expectations from humanitarian responders forever.

“The immediate value of that effort can never be monetarily quantified but the impact changed expectations from humanitarian responders forever.”

I was the Emergency Coordinator for Médecins Sans Frontières in Haiti in 2010, responding to the cholera outbreak that occurred in the aftermath of the earthquake. Our cholera treatment centers in the capital, Port-au-Prince, recorded where patients were coming from, but we weren’t able to systematically map them. We didn’t know if – or where – there were hotspots of the disease. If a cluster of cases came from a single named neighborhood we might see it from a graph, but if it was in several adjacent neighborhoods there was no way to see it.

Google’s Crisis Response Team sent two software engineers, Ka-Ping Yee and Pablo Mayrgundter, to join our team in Haiti, who brought an open dataset from a group I’d never heard of—the Humanitarian OpenStreetMap Team. Two weeks later, I was able to inform the Haitian water utility and UN of water and chlorination outages in Port-au-Prince because I could see them in my patient data! We had an animated map showing patient numbers by neighborhood per day as larger or smaller dots. Clusters of cases in specific areas were very obvious. We were able to get them fixed earlier by assessing and reporting them (and in some cases donating fuel and resources for repairs); this was literally life-saving. Free map data was demonstrably helping prevent cholera transmission and saving lives.

We got lucky in Haiti for this to work so well. Remote mappers, many of whom were Haitian diaspora, had correctly named many neighborhoods. More critically, the local descriptions of neighborhood location mostly fit in a single column (the name of a street, often with a number, i.e. Mon Repos or Fontamara 27) without many duplicates. In most places humanitarian medics work, this is not the case; we need several columns of geography to unambiguously identify a verbally given location (for example, in rural Sierra Leone, the District, Chiefdom, Section, and village name; without the preceding administrative divisions village names are often full of duplicates).

As far as I know, Haiti in 2010 was the first demonstrably life-saving use of patient origin data in humanitarian medicine; it showed us the way, and that it can be done. I now consider it a basic humanitarian duty to ensure that this life-saving data and capacity is available everywhere so that public health practitioners (both local and external) can do their work effectively. 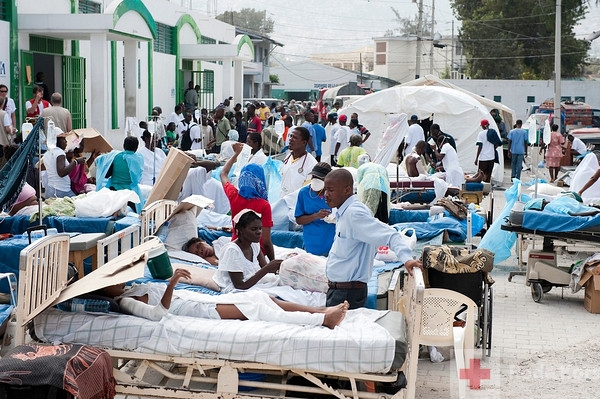