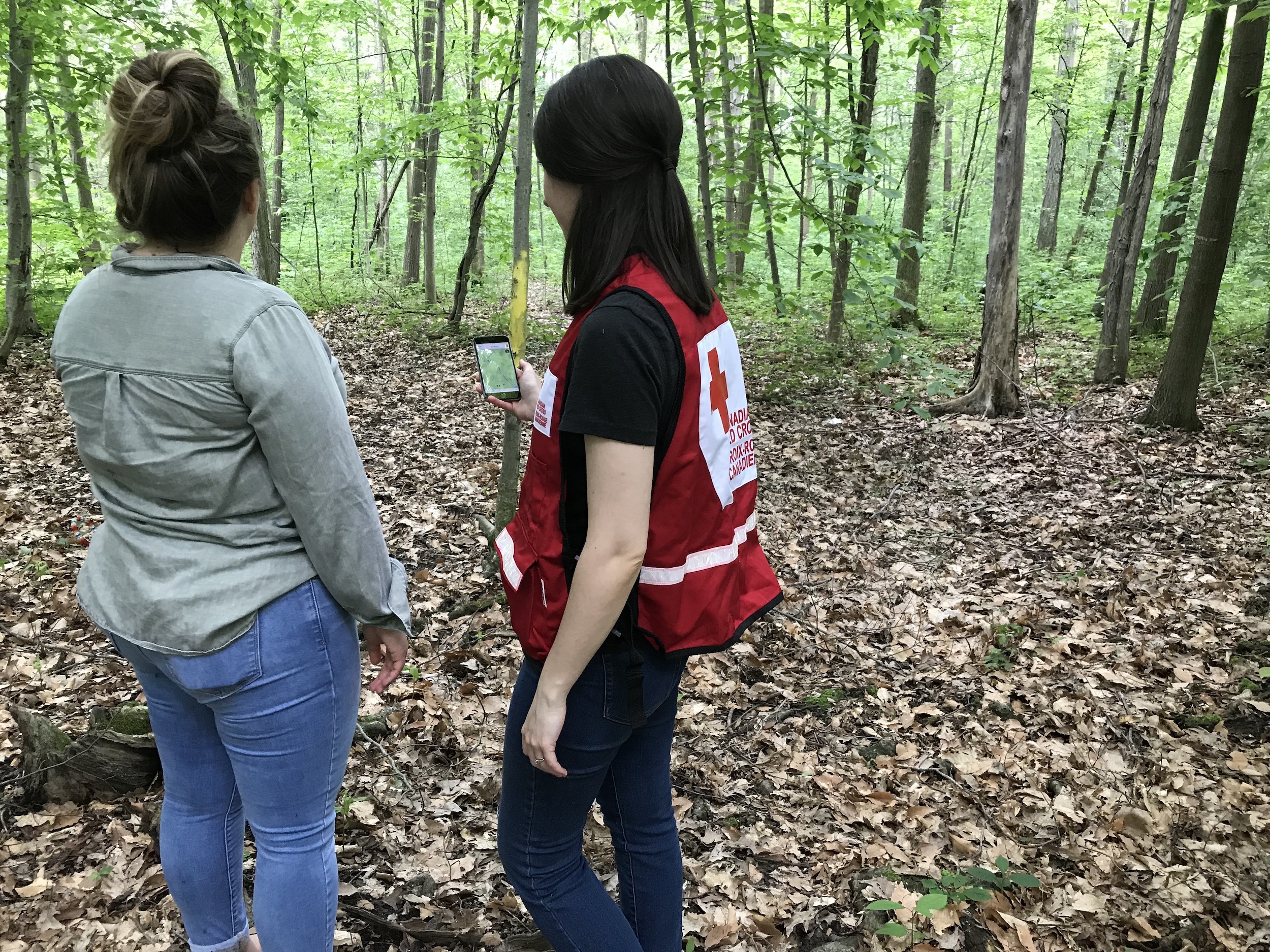 Melanie Chabot is a GIS Coordinator with the Canadian Red Cross. She leads the Missing Maps pilot project in Canada which aims to map areas important to indigenous communities and to assist with disaster preparedness and response in these areas.

In June 2018 we started a pilot project to bring Missing Maps to Canada and build resilience in remote communities. Many of these remote communities in Canada are Indigenous Peoples who live on reserves and although we didn’t explicitly set out to map Indigenous communities, we think this is a really interesting part of the project. The Canadian Red Cross wants to reduce the impact and risk of disasters, so building community resilience and disaster preparedness in Indigenous communities is an important part of that.

The project’s purpose was to find communities that are interested in improving their maps in OpenStreetMap. We work with them to map their community in a way that they see fit and create mapping products with them to improve their emergency preparedness.

They’re fairly remote communities, which are culturally and geographically distant from non-reserve communities. We’ve also worked with a Métis Nation community who live in an urban environment.

Putting people on the map for disasters and cultural significance

Once the communities are mapped in OpenStreetMap, the Canadian Red Cross can use the data to respond to large scale disasters (such as forest fires or floods). A few years ago a forest fire severely damaged an area of a Canadian city home to a Métis community, but no one had updated the map of that area since the fires. Some Métis members’ houses were burnt down completely and many had to relocate to other parts of the city or even other cities or towns, making it difficult to track the dispersion of the community. We worked with them to update the affected area on OpenStreetMap, which not only helped identify where the members of the community are now and what help they need, but also provided updated maps for the Canadian Red Cross, who are quite involved with the people of that community (both Indigenous and non-Indigenous).

The maps can also help the community plan for emergencies - we work with them to build products that they need, such as a large printed map that they can have in their emergency operations centre. One Indigenous community I’ve been working with needed to update their Community Emergency Plan, so we trained the local Emergency Management Coordinator to map the area through OpenStreetMap. He got bitten by the mapping bug and wanted to map everything! In only two weeks he jumped to the top 30 mappers in Canada! It’s probably made his job a lot easier and we’re excited to see what comes with the final map.

Everyone in these small rural communities tends to know exactly where people live, so they don’t necessarily need a map and there aren’t posted road signs or house numbers, like most of Canada. Indigenous people on the reserves tend to have to look after themselves unless there’s a large emergency. That’s when there can be problems, as first responders and outsiders find it hard to navigate and find people in need. By mapping these areas, it helps improve communication and response. Even on a smaller scale, e.g. when someone calls an ambulance, it will be 1-2 hours away, so any time first responders can save to find that house will make a big difference. Imagine trying to find a house but there are no road names or house numbers marked - you have to ask people which wastes a lot of time, so having a road map with house numbers and overlaying local knowledge makes a big difference.

A lot of communities are interested and see the value in improving their maps, but they don’t have the resources, capacity or the time themselves to map their community. Our project provides support on how to build GIS skills and use maps. We have volunteers to support with time and effort required to do these maps. 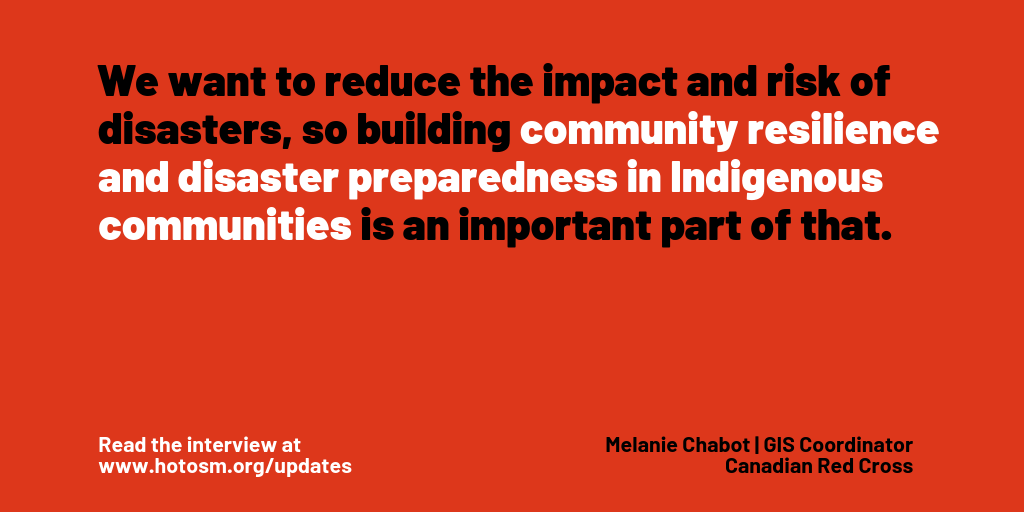 When you’re mapping with populations that have never mapped in OpenStreetMap before, you face interesting challenges, such as how to capture unmapped features that are culturally important to the community. One challenge was how to bridge the gap between Indigenous knowledge and OpenStreetMap mapping standards - this was an area that we didn’t originally seek to address, but it came up a lot so we are working with communities to find solutions.

Another challenge is what information do we put in OpenStreetMap? There is a history in Canada of poor relationships between other actors and Indigenous communities - much of Canadian history has led to distrust between Indigenous Peoples and other groups. Because of this, putting your information in an open-source platform can be a bit troubling for some as they don’t want others to come in and misuse the information. For example, it’s important to the community to map and preserve the location of ceremonial or historical sites, but they don’t always want them on OpenStreetMap in case an outsider comes in and destroys it.

Every community has different perceptions of how much information they want to put up on OpenStreetMap. Some members of the community are open to sharing their culture and others are more apprehensive. We’re taking it step-by-step and working with them. One solution is to create maps that are offline and aren’t open source.

The main goal of the project is to map what is important to them. Sometimes we give the sites a vague tag, such as a leisure area rather than a ceremonial site, other times they have features they want to be mapped (such as teepees or cultural centres), and we’ve had to create a new tag for that feature in OpenStreetMap.

It’s been fun to map these Indigenous features as it’s a voice we haven’t seen in OpenStreetMap yet. 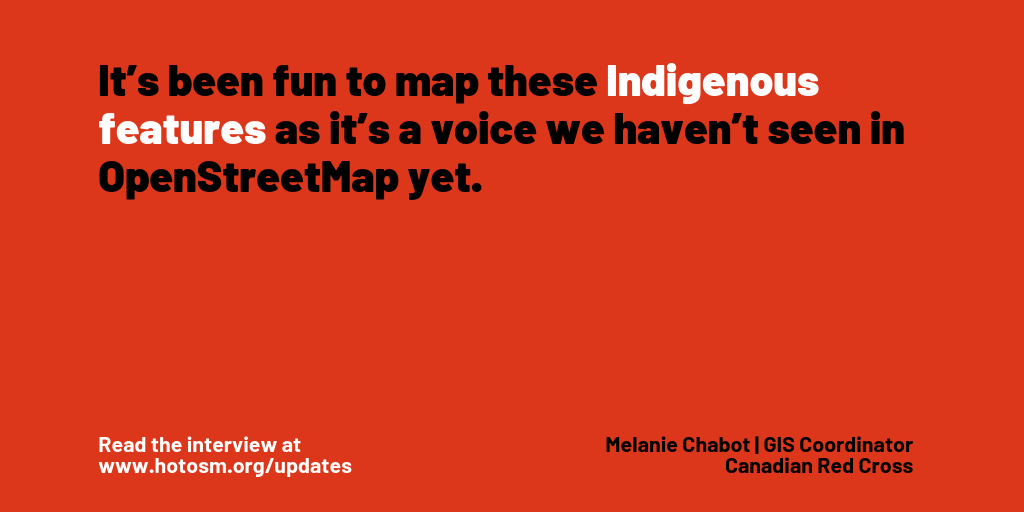 How HOT and missing maps communities have supported the project

We ran a Mapswipe project in May to scan through the forests looking for houses and roads. There are a lot of forests in Canada so that was really helpful! We had 18 incredibly helpful mapping volunteers that supported us on the project and we couldn’t have done it without them! They’re remote mappers from across the country with extensive mapping and GIS experience. The Tasking Manager helped us to coordinate the mapping tasks with our team of volunteers.

The OpenStreetMap community in Canada has been really supportive of this project as they’re also interested in mapping rural and remote areas of Canada. For me, this was a dream opportunity to use mapping to help other communities. It’s nice to know that I can help others learn how to map and to use that mapping for emergency preparedness is exciting. I’m honoured that they welcomed me into their community and shared their local knowledge with me.

This article was written from an interview with Melanie Chabot, GIS Coordinator, Canadian Red Cross. Featured image at the top shows Melanie creating a GPS track of an interpretive trail used by a Missing Maps pilot community with the help of a community member, to be uploaded into OpenStreetMap.