Benin joined the OpenStreetMap global open source mapping community in 2013 at an OpenStreetMap awareness workshop organized by an international HOT volunteer serving in Togo. OpenStreetMap Benin is a young volunteer community that conducts digital and free mapping activities. We have been carrying out voluntary activities to promote OpenStreetMap to NGOs, international organizations, local authorities, academics, and at local conferences. We organize open and complete OpenStreetMap mapping parties via voluntary projects (Cotonou mapping and University of Abomey Calavi, Parakou city, Porto Novo etc), remote data production with satellite imagery and field data collection. Mapathons are also organized with West African OSM communities and the global OSM community. In a context of limited logistical, financial and human resources, as well as a certain general ignorance of Open Data, each activity becomes a voluntary and passionate commitment. Since our inception, we have participated in several awareness and training activities in the OpenStreetMap mapping community and open geomatics in Benin and West Africa. These capacity building workshops are supported by the Direction de la Francophonie Économique et Numérique (DFEN/OIF) and implemented by experts from the Association les Libres Géographes (LLG) in collaboration with the Association Projet Espace OSM Francophone (EOF Project) and sister communities in West Africa.

Benin is a West African country, covering an area of 114,764 km² and located between coordinates 9° 30’ N and 2° 15’ E. Benin is a privileged tourist destination in the sub-region, but unfortunately this territory remains little known by the authorities and by all Beninese, because the majority of the country has still not been mapped. The little existing cartographic and GIS data are not open to the populations, these data remain available only to the authorities in charge of these institutions; the data is for their eyes only. This is one of the reasons that motivates us to work more to contribute to the mapping of of Benin in OpenStreetMap, to create an accurate, up to date map, and to make the data accessible to everyone.

In our efforts to promote the OpenStreetMap project we are confronted with difficulties, especially financial ones. This is due to the fact that we don’t have an operating budget, thus the members make voluntary contributions to ensure that activities are carried out. This limits us from having more impact. This year we were given the opportunity to be a part of HOT’s Microgrant program. Our objective this year through this support is to map the border regions of Benin, especially the northern parts of the territory. These regions are little mapped and very little known by health authorities. It should be noted that these regions are defined as areas at risk for cross-border diseases which happen because of transitions and migrations. We therefore want to map these regions in order to allow health authorities to have a better knowledge of the territory, and be able to react effectively in the event of crises or epidemics. Beyond mapping cities, our goal is to train young people in these regions to use OpenStreetMap, so they can continue to map and update the base map of their regions. With the microgrant we were able to acquire smartphones for field data collection. Halfway through the project, we have already achieved improvements in fieldmapping, training workshops and data creation. We have already finished mapping Tanguieta, a city located in Northern Benin, and added the points of interest here. We are currently mapping the areas in Porga, a border town with Burkina Faso.

Going forward, we plan to organize training workshops for girls to encourage more female participation in our community. We will also continue mapping the border areas of northern Benin through Mapathons organized in collaboration with the young people we trained in Tanguieta. The maps produced will be used by NGOs, humanitarian and research organizations, such as the Red Cross, IRD and others, for better coordination of interventions in the field.

Thanks to HOT community for the support!

We thank the HOT community for the support to OpenStreetMap communities in open data creation and promotion programs. We are therefore grateful to HOT for the support we have received this year. We hope we can benefit from HOT’s other community development programs in the future, such as being equipped with computers, which will facilitate training and data creation in rural areas, where most young people cannot afford computers. These computers can be used during training and during mapathons by people who do not have computers yet remain motivated to learn OpenStreetMap and participate in the creation of open geographic data for all. Thanks again to HOT for supporting us, HOT “a wà nû”!!! 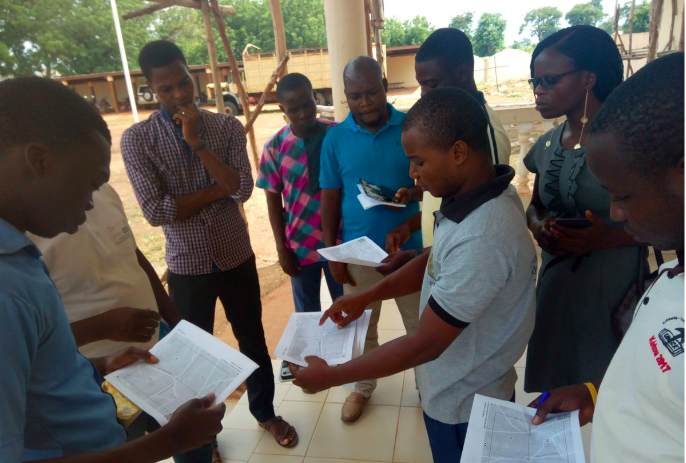