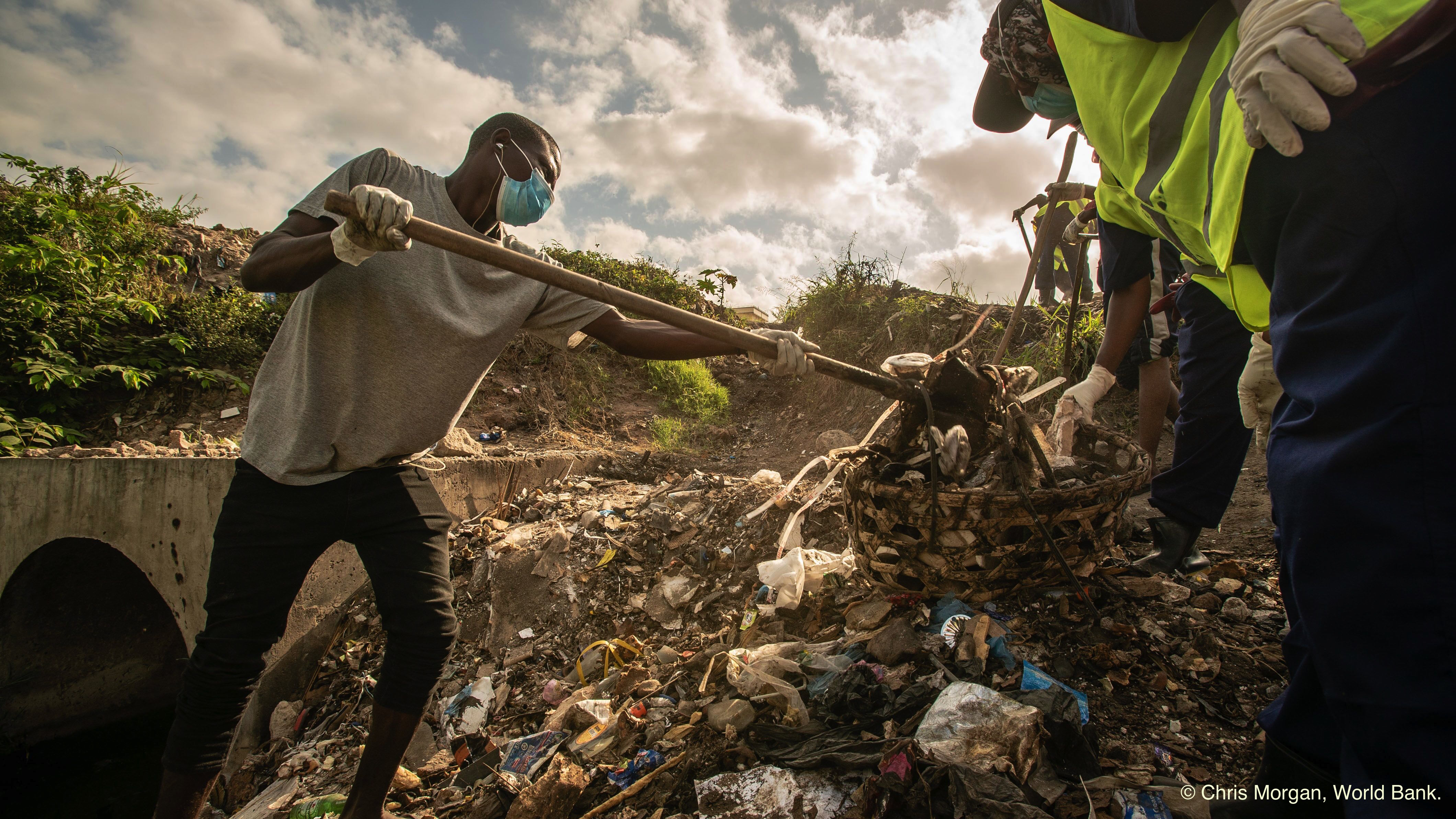 2018 has been a year for floods. In March, excessive rains in East Africa killed nearly 500 people. In July, Japan saw heavy downpours which led to widespread devastation with more than 200 deaths. In August, another 300 people lost their lives in Kerala, India during the worst monsoon in nearly a century. And just this month, Typhoon Mangkhut has killed over a 100 in the Philippines while the east coast of the United States has witnessed unprecedented flooding as a result of Hurricane Florence.

In Tanzania, students from Ardhi University and the University of Dar es Salaam have completed the mapping of 228 subwards – identifying assets and threats to strengthen the understanding of climate risk at the local level, leading to greater flood resilience. Ramani Huria would not have been able to accomplish this without scaling up the project, working with well over 450 students for the past seven weeks.

To get an idea of the preparation for this work, check out our previous post here – but to get an inside look at how we conducted this year’s industrial training read on.

After orientation, Week 2 began with trash mapping to support a civic-led mass movement called Let’s Do It! World, whose goal is a clean and healthy planet. This was organized by their lead partner in Tanzania, Nipe Fagio, or “Give me the broom” in Swahili. The aim was to collect major trash points in Dar es Salaam. Students mapped 44 wards of the city by using OpenDataKit (ODK) - an Android application that we use to collect enormous amount of data. In total, 20,392 trash points were mapped. It is never a good thing to have so many trash points in a city, but by mapping them in advance we are able to strategize the efforts during World Cleanup Day on 15th September. 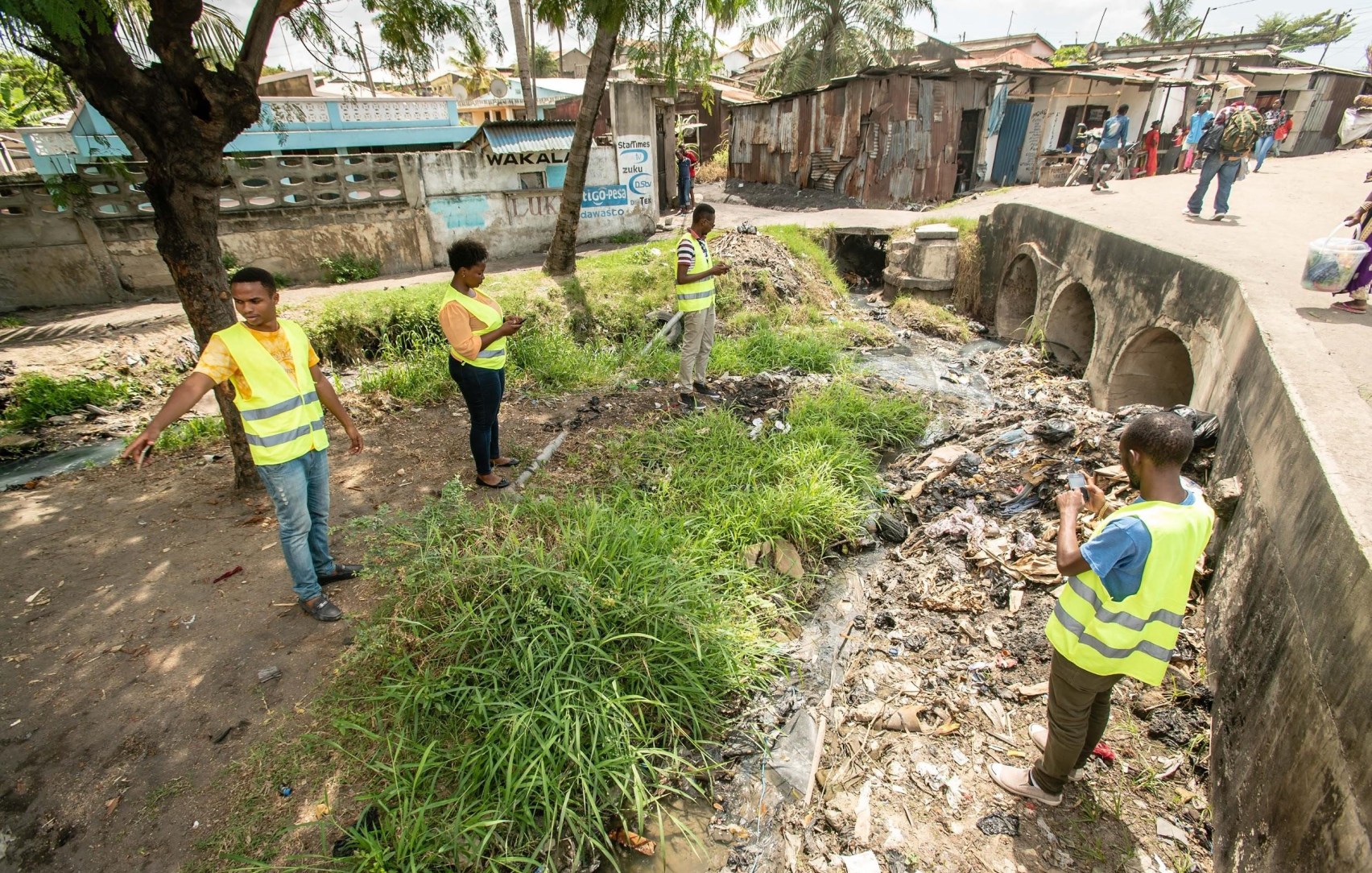 For Weeks 3-6 students engaged in the main part of this summer’s training: Community Asset and Threat Mapping. First, they received trainings on how to conduct meetings with community members and collecting data with their help. Then, students were trained on how to handle challenges and problems that may occur during their field operations, for instance, when political issues arise. What follows is the methodology that Ramani Huria used to conduct our data collection.COMMUNITY ENGAGEMENT TRAINING

For Weeks 3-6 students engaged in the main part of this summer’s training: Community Asset and Threat Mapping. First, they received trainings on how to conduct meetings with community members and collecting data with their help. Then, students were trained on how to handle challenges and problems that may occur during their field operations, for instance, when political issues arise. What follows is the methodology that Ramani Huria used to conduct our data collection.

Community meetings were held differently based on whether the subward was mapped or unmapped. There were 26 wards in Dar es Salaam that were mapped in detail during RH 1 in 2015, and 18 wards that were unmapped.

For the case of mapped subwards the exercise was a bit simpler because we already had data for them and printed a map on which community members identified assets and threats as well as any missing information. For the case of unmapped subwards, the task was a bit more complicated since it involved data collection of important features such as schools, hospitals, and open spaces on the specific wards, as well as cleaning that data. After this, students produced a map that community members then used as a base map in the community meeting to identify assets and threats on flooding, as well as missing information for students to recollect information so as to produce the final detailed map. 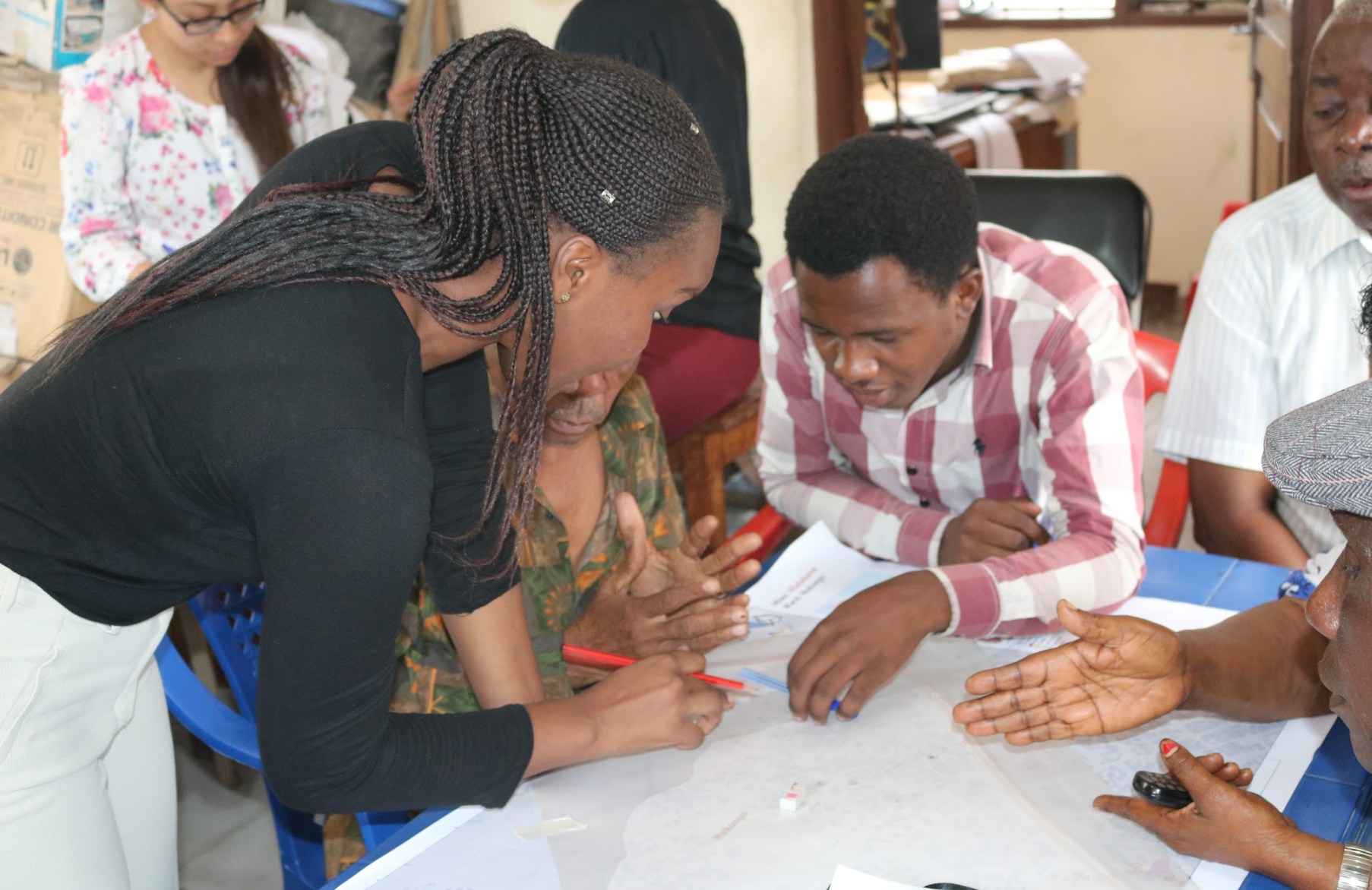 Community meeting in Mlalakuwa subward- in Makongo ward. Students are working together with community members who identify assets and threats in the subward. Photo credit: Godfrey Kassano/Ramani Huria.

Students in each group made sure they collected all relevant information by asking questions and keeping participants engaged. The process of creating three separate groups ensured redundancy, in order to catch all information.

In conducting meetings, community members were excited on how engaging the project is. By involving them in all stages, from data collection to risk identification, it creates a sense of ownership and may increase data use as the community feels the data belongs to them.

Community members also suggest that feedback can be shared with them after data collection and analysis.

“Now that you have collected information from “my community” we will be happy to see feedback of what you have obtained from your survey.” Paul Richard, Chairperson -Kilongawima subward, in Kunduchi ward.

Challenges in Management and Involvement with Community Members

Managing a large group of students and producing intended outputs was a challenge, but by keeping them engaged, and by understanding the clear objective of the project they felt responsible and part of real change. This was done by raising up students who are natural leaders to support their fellows during field work, this made them feel comfortable working together.

Involving community members/leaders in mapping is an excellent objective, but some of them expected to earn more money from the project, even threatening to stop working with us if we do not pay the amount that they wanted. To counter this, students explained the benefits of the project, which led to a better understanding and we worked smoothly with community members. This was possible by making them understand how the collected information will help them in flood hazard planning and prevention, since most of them have faced floods almost every year. They became cooperative and provided reliable information which will help in reducing flood hazards in their neighborhood.

Two main deliverable from the process are reports and maps, produced for each subward. A report consists of information gathered from a community meeting, conducted with local residents and leaders about the assets and possible threats perceived by the community. The map includes annotations that correspond to the report to better describe the situation visually. 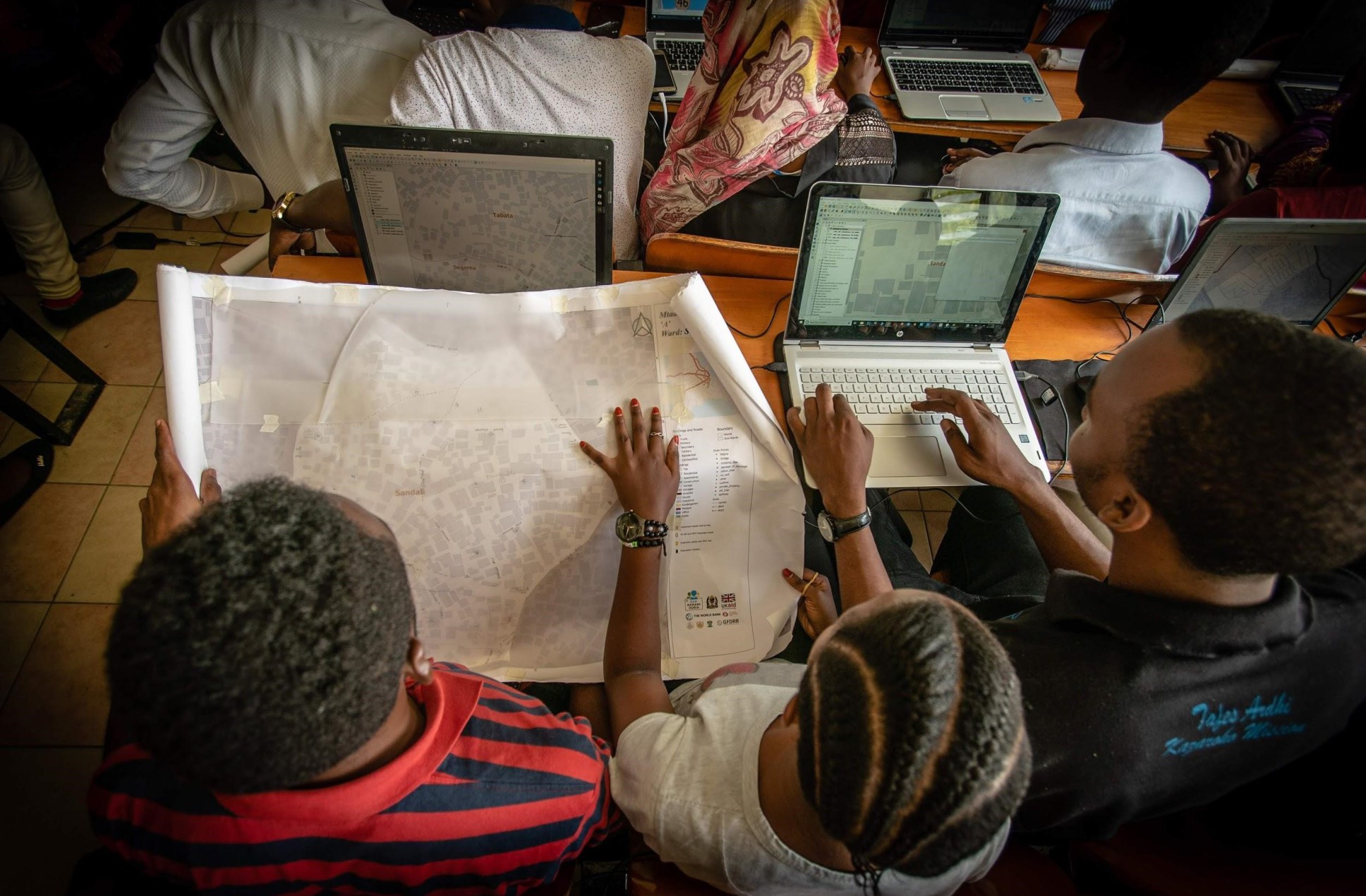 In addition to the data collectors, students worked in two teams to specialize in data cleaning and map making, to ensure the highest quality deliverable. The reports and maps will be used for risk reduction as well as disaster management planning in the wards by Deltares – an independent institute that has an expertise in flood risk management. Together with ward leaders they will sit and develop a disaster management plan. In our next post we hope to share a Community Asset and Threat Inventory, our team is currently working on finalizing this.

At the same time as the Community Asset and Threat Mapping, fifteen students from the College of Information and Communication Technology (COICT) – University of Dar es Salaam took part in a separate but related project about elevation and differential barometry. Understanding flood hazard and risk in complex urban water systems and vulnerable neighbourhoods requires accurate geospatial information.

Obtaining elevation of surveyed areas is costly and technical knowledge is a must. This project tackles the two issues by using an Android application and cheap electronic devices: Arduino Uno and BMP280 (Barometric sensor). Any member of the community with a knowledge of using a smartphone can take part in mapping elevation of their neighbourhood with Differential Altimetry (Android app). For a period of 8 weeks, students assembled units (shown in the picture below) and carried out experiments in various locations around Ardhi University campus. 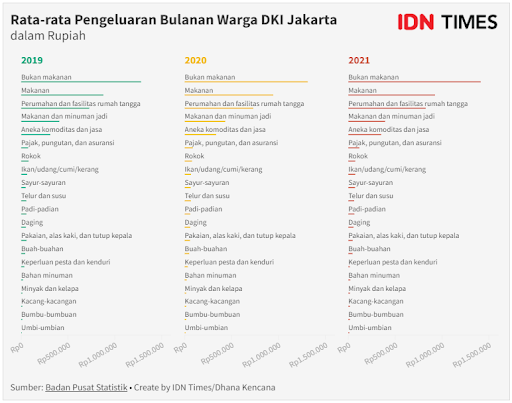 After finishing the data collection for assets and threats, Ramani Huria is teaming up with Data Zetu to focus on our next big goal: shinas. The shina (roughly translated to “branch” in Swahili) represents the most granular administrative divisions that exist in Tanzania. One key to mapping shinas are wajumbe, or shina leaders, who are the first point of contact for local households over issues such as public services, resource allocation and community challenges, such as theft etc. 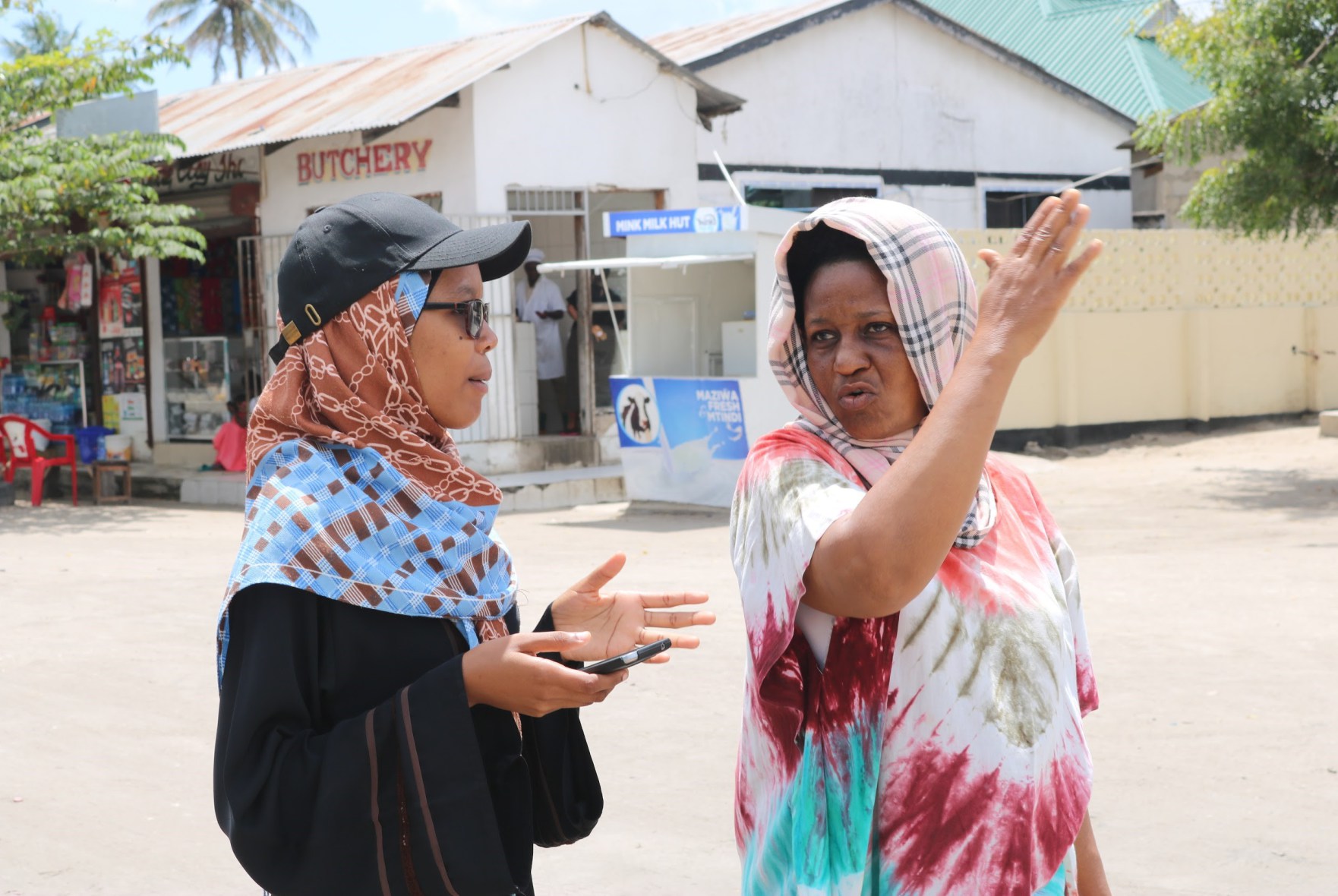 Wajumbe are chosen by their community to act as their liaison with the local government. These shinas were originally comprised of ten household clusters – 1 representative per 10 households – but due to increases in population and urbanization, these hyperlocal areas now contain between 30 and 150 households. Mapping shina boundaries will provide community members and service providers, such as emergency responders and public health experts, an efficient and more precise method to locate households at a smaller scale. Being able to locate themselves and other community members at the shina level reduces the amount of time it takes for services, such as emergency response, to reach households in the case of, for example, a flood or fire.

Look out for our next post to see final products for assets and threats throughout Dar es Salaam, as well as mapping progress on shinas!