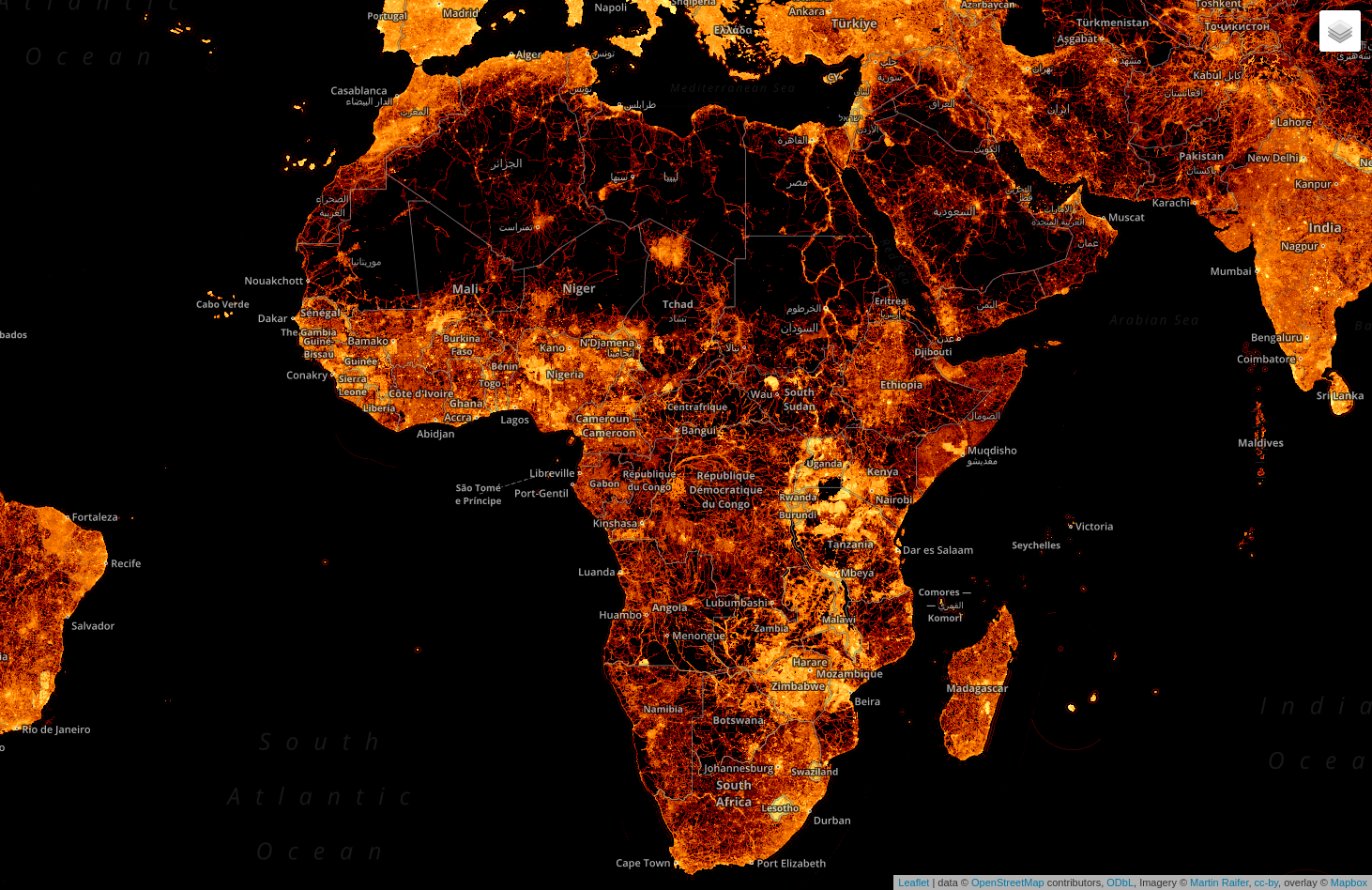 OSM Africa is a network of OpenStreetMap communities from all over Africa working together to grow OpenStreetMap on the continent.

The brightest spots on the map above illustrate substantial amounts of OpenStreetMap node density in different places in Africa.

This visualization shows the total number of mapped buildings per year in each country from 2007 to 2020. It also shows the history and journey of OpenStreetMap editing in Africa.

By June 2020, there was a total of 57,766,001 mapped buildings in Africa, with Tanzania leading at 11 million, thanks to the work done there by the Humanitarian OpenStreetMap Team (HOT), the World Bank through Ramani Huria and Crowd2Map Tanzania. 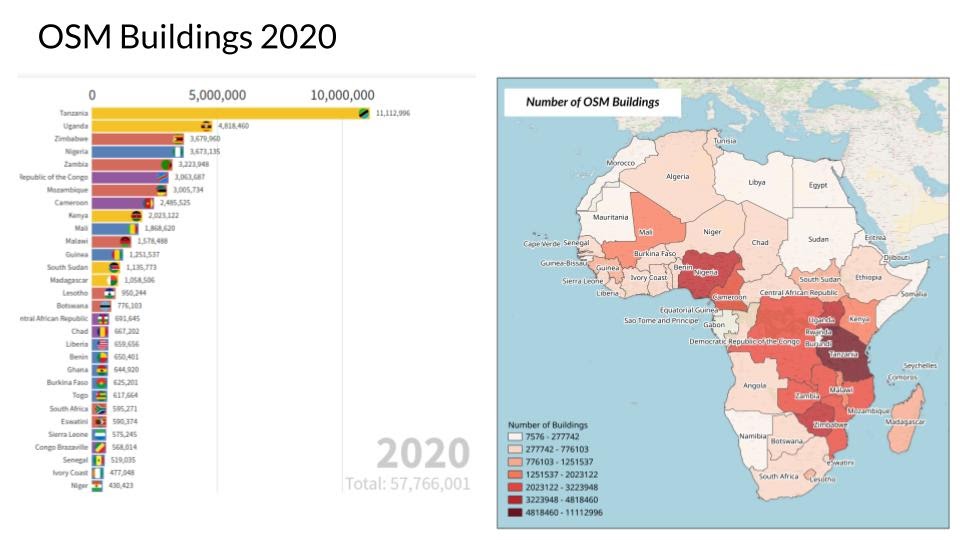 We also looked at the population in comparison to the number of mapped objects, to measure map completeness in each country, which shows Eswatini, Lesotho, Seychelles, Botswana and Zimbabwe as the most mapped countries. Map Lesotho is an interesting case where the Government is leading in the use of OpenStreetMap for rural and urban planning. 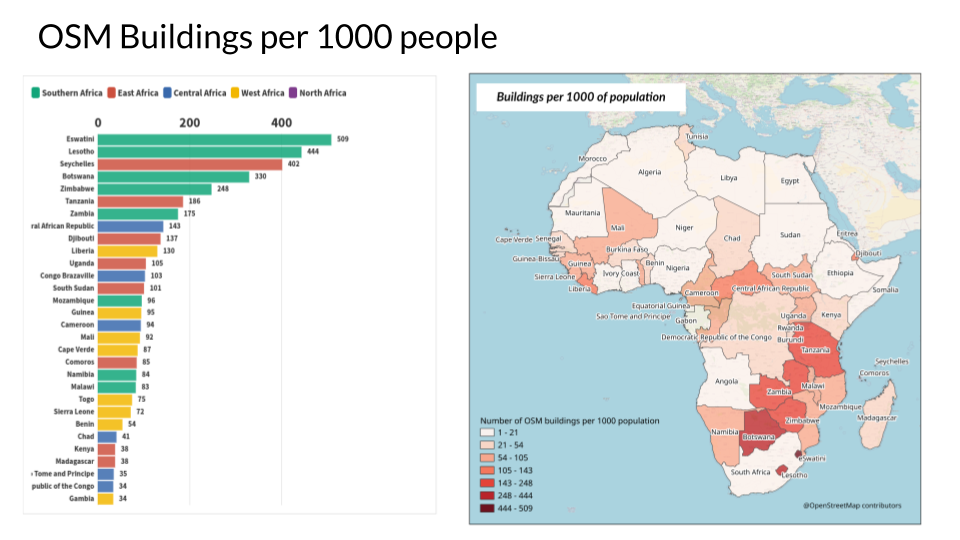 Sixty-five percent of the countries that participated in the survey indicated there is an OpenStreetMap community in their country, although the levels of activity differ from country to country, from very active to inactive. It is also interesting to note some countries like Egypt and Morocco where there is active mapping but no single community. 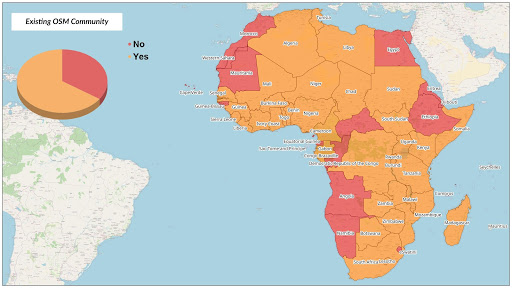 For the countries where there are existing OSM communities, we look at some of the factors behind their existence that were pointed out in the survey.

One of the reasons for the growth of OSM communities in Africa is the rise of YouthMappers. It started its African presence with the founding of the University of Cape Coast chapter in Ghana in 2016, and there are now 105 YouthMappers chapters in universities across Africa, which is 50% of the total number globally. Nigeria and Tanzania have the most chapters with 17 and 15 respectively.

YouthMappers is an international network of university student-led chapters who organize, collaborate, and implement mapping activities that respond to development needs around the globe, creating and using geospatial data and information that is made publicly available through OpenStreetMap.

Growing OpenStreetMap through universities is a good model, as the students have a direct incentive to volunteer through mapping and are gaining geospatial skills while at the same time contributing to open data. YouthMappers provide Leadership and Research Fellowships to a number of students per year, who go on to become leaders of OSM communities in their countries. 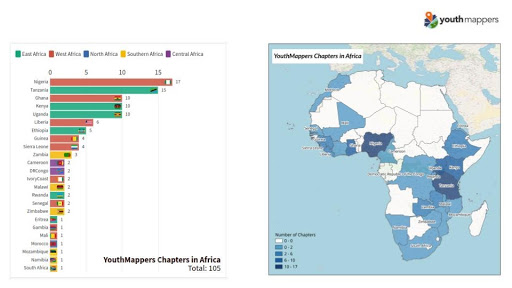 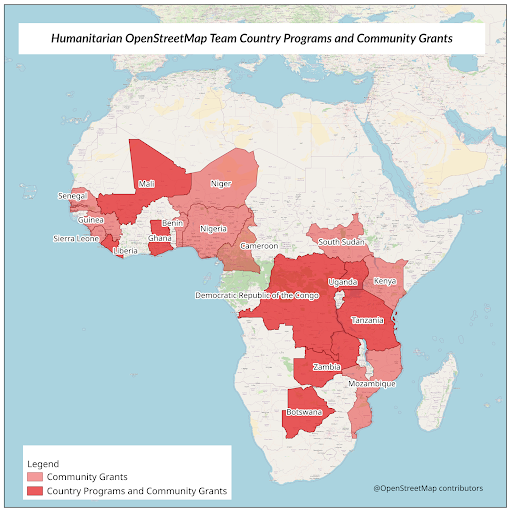 Open Cities Africa is a World Bank project that promotes collaborative mapping to build resilient societies in 16 cities in 13 countries in Africa. This project collects data, and builds skills and networks to support disaster risk management in Africa and makes the much needed connection for OSM communities and governments to collaborate on projects. 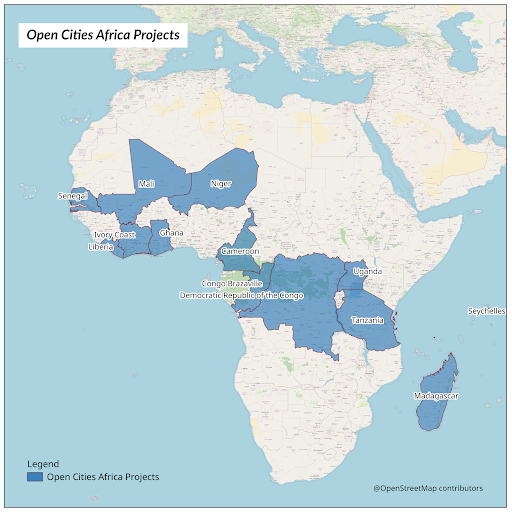 OpenStreetMap communities in Africa do meetups for mapathons, mapping parties, and planning. Meetups are a good way to keep the community engaged and active. It requires space, an internet connection, a team to organize, and in most cases funds to pay for these resources including snacks and refreshments.

From the survey we found out that 46% of the communities have not met in a long time, meaning that the community is in place but not particularly active. Out of all of the communities, 24% have never had any meetup, which suggests there is not an active network in place. The remaining 30% meet regularly, either weekly, biweekly, or monthly.

The regular Meetups indicate the existence of leadership and the capacity to raise funds or resources through membership fees, through funded projects or through partnerships with a university, NGO, or company that can provide space and internet.

When it comes to communication, most OSM communities in Africa communicate through Facebook and WhatsApp. The other communication channels used are Telegram and the Talk Mailing Lists. Only 34% of the communities have a website. 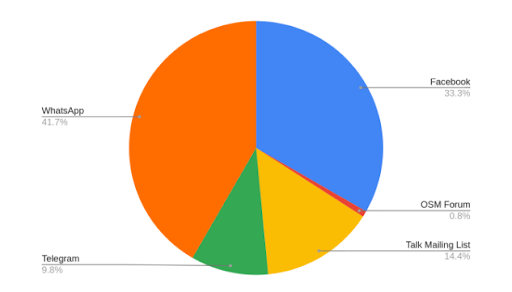 When reaching out to these communities, it is important to use their preferred channels. Otherwise they may miss out on the information. 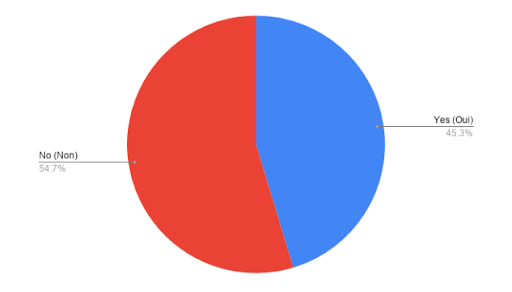 It is also interesting to note that there is no uniform leadership structure. One of the challenges that new communities face is deciding on what kind of leadership or organizational structure to put in place.

In particular, the structure they choose should be able to accommodate different groups promoting OSM in a single country. If not done properly, this choice can lead to divisions within the local OSM community as some groups may feel left out.

For countries that have a leadership structure in place, they have chosen a range of options for their structure. Some have governing boards, others have a president and other officers, and still others build their structure around a country coordinator and project coordinators. Some communities eschew a formal structure and instead are built around an ad hoc core group. For the communities that are built around YouthMappers chapters, they adopted that organization’s leadership structure.

Depending on how long the community has been in place, each community defined success in a different way. Some have focused on running mapping projects with support of a HOT Microgrant or participation in the Open Cities Project, and others aimed for organizing regular meetups for training and mapathons. Others looked at long term sustainability through registration as a non-profit organization, establishing YouthMappers chapters, and growing partnerships with government and other players to make open data available for humanitarian response and development.

Growing an OSM community in Africa comes with challenges. The countries which have active communities are the ones who have managed to find solutions to these challenges. The biggest challenge expressed by several communities is a lack of resources or funding for internet, devices, and meeting space, followed by lack of leadership within the community. There is also a challenge of an absent volunteer culture because of high unemployment rates, and an absent open source culture. In some countries, political challenges like civil war and occupation by other countries makes mapping dangerous. Low resolution, unclear imagery, especially in informal settings, makes mapping difficult. Some communities also cited gender imbalances where there are fewer women engaged in mapping as a challenge.

Solutions to the Challenges

For all the challenges faced, there are solutions which have worked in some countries that can also be applied in the other countries facing the same challenges. Formal registration as an organization opens up opportunities for funding, partnerships, and projects which helps communities to get access to internet, devices, and working space. Organizing State of the Map Africa conferences and even smaller meetups at local levels helps communities come together to share resources and learn from each other.

There is also a need to grow awareness about OpenStreetMap, open data, and open source methods through training and collaboration among different actors, including GIS professionals, businesses, and government. Most importantly, the communities that are already existing are helping to start up new ones where they don’t exist, including creating new YouthMappers chapters.

One of the major challenges, pointed out in the survey was lack of access to funds for internet access and other things. Yet communities in only 11 countries from Africa applied for the OSMF Microgrants this year.

For the countries with no applications, some had communities that were not aware of the call for applications or no active community to begin with. For others there was just a lack of capacity, with no team to work on a proposal, and a few felt they had no need for a microgrant. 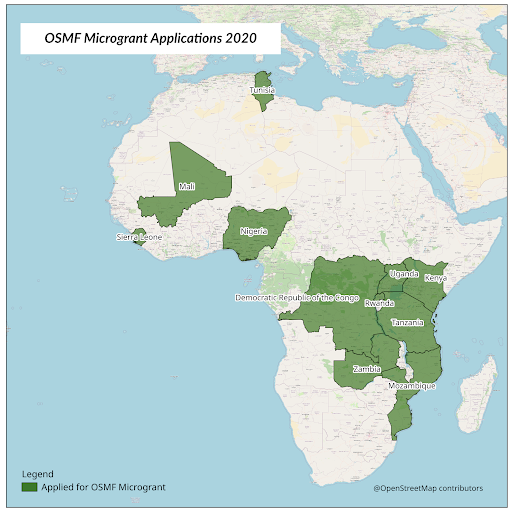 OSMF Membership The OSM Foundation has a membership scheme which costs £15 per year. It also has the option of a fee waiver for people who don’t have access to suitable money transfer options or can’t afford the fee because of financial hardship.

However, only 32% of the people who responded to the survey are members of the OSMF Foundation.

The following were given as some of the limitations for becoming members.

The lack of awareness shows the need for the foundation to consider using different communication channels when reaching out to the communities in Africa, including Facebook and Whatsapp. Otherwise many will be left out.

It is important for OSM Africa members to also participate in these working groups, not only to support the foundation, but also to be part of the process of shaping OpenStreetMap in a way that works for us. 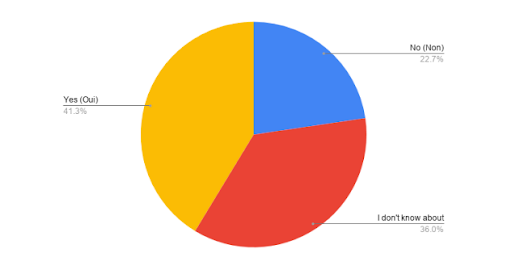 Several reasons were given for lack of participation in the OSMF Working Groups, including a lack of awareness of the existence of the Working Groups, lack of time, lack of access to the internet, and the language barrier as most of the communications happens in English.

Local Chapters are country level or region level organizations affiliated with the OSM Foundation. There are several benefits in becoming a local chapter, among which is being a legal entity representing OpenStreetMap and mappers when dealing with the local government, business, and media.

At the moment there are only 9 official Local Chapters recognized by the OSM Foundation globally and none of those are in Africa. Why are there 33 OSM communities in Africa, yet no local chapters affiliated with the OSM Foundation? We asked the members what steps should be taken to change this.

They reported that we have to start by growing individual membership in OSMF as well as setting up local leadership structures. We need to participate in the Local Chapters and Communities Working Group to be part of the discussion to make the application process easier.

Most importantly, there is a need to create more awareness about the process and benefits of becoming a local chapter which can be done by inviting the OSM Foundation to speak to OSM Africa as well provide mentorship to the young communities to grow into local chapters.

Where will OSM be in 10 Years

Lastly, we asked the OSM Africa community leaders about their vision for OpenStreetMap in 10 years time.

The community wants OpenStreetMap to be the main source of free geospatial data in Africa for governments, organizations, and development, spearheading solutions and policies. Entire countries will be mapped in OpenStreetMap, with more strong communities, more users, and more job creation. OpenStreetMap will be the number one basemap used in the world and there will be more integration of OpenStreetMap in games, 3D Mapping, Points Clouds, VR, and entertainment.

The purpose of the survey was to see where we are as OSM Africa, where we need to be, and how we can focus on achieving our goal to map each and every corner of Africa.