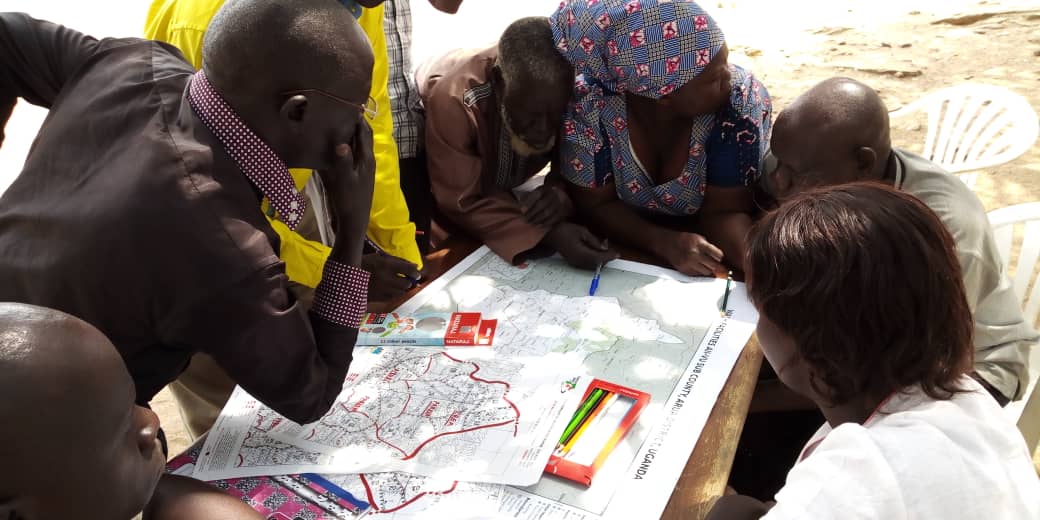 In collaboration with United Nations’ Development Program (UNDP) and the Ugandan Office of the Prime Minister, HOT developed the first-ever spatially-focused Risk Atlas of Arua District, containing maps, granular data, and analyses of the existing hazards, exposure, and vulnerabilities to communities in northwestern Uganda.

In January 2019, HOT was engaged by UNDP to develop and update the risk profile of Arua District, Uganda, into a spatially-focused Risk Atlas. According to the Ugandan Office of the Prime Minister, Arua has settled over 175,000 refugees in recent years, mainly due to the recent influx of people arriving in the northwestern part of Uganda from South Sudan, Burundi, and the Democratic Republic of Congo. With this rising population, there is a risk of strain on already scarce natural resources and human services in the district. In 2018, UNHCR and Food and Agriculture Organization (FAO) estimated that the wood fuel consumption in the large settlement of Bidibidi - the biggest refugee settlement in Africa - was already around 300,000 tonnes annually and would only last for three more years.

In order to better understand whether there has been a change in vulnerability and exposure to hazards such as flooding, bush fires, and windstorms in the district of Arua, UNDP engaged with HOT to combine UNDP’s recently collected data on both refugees and host communities across the district with government verified risk and exposure boundaries via vulnerability statistics and geographic shapefiles. This breadth of data would be brought together to develop the first granular, community-centric, and government verified risk atlas for the country. 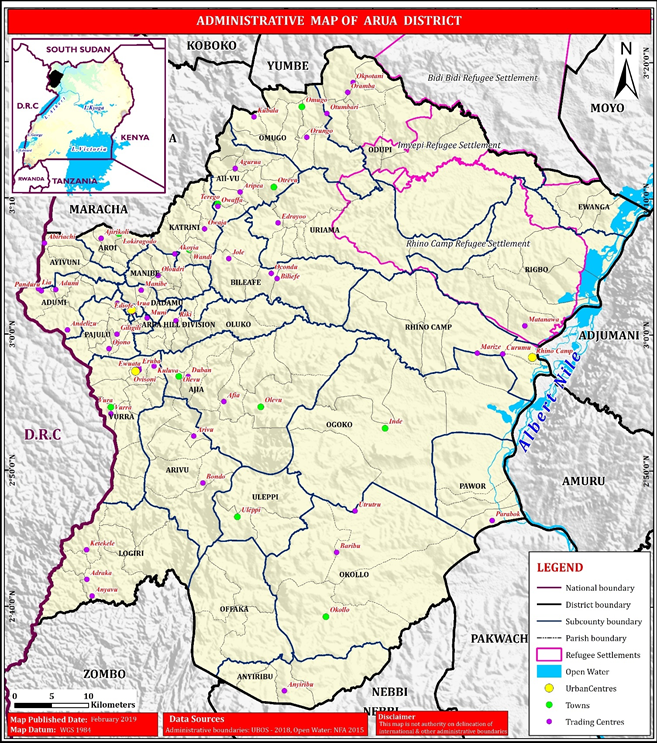 The Arua Risk Atlas has the potential to assist government, development, and humanitarian actors target, plan, and implement their disaster and risk reduction initiatives from a granular, evidence-based perspective. The Atlas raises awareness of natural hazards and the exposure and vulnerabilities of populations, critical infrastructure, protected areas, croplands, and facilities. It also guides and supports decision-makers and communities in northern Uganda to make risk-informed planning decisions with a communitarian perspective.

Over a five-month period, HOT developed the first community-based Risk Atlas in the country of its kind that included the use of open-source geographic data and drone mapping. The Risk Atlas features different maps and analyses, including a multi-hazard risk map highlighting the severity of all hazards experienced across the sub-counties of Arua district. This map was generated through a qualitative risk analysis process focused on the probability and severity of the impact each hazard would have in a particular sub-county. Using a 4 point Likert scale, each sub-county was then ranked and categorized by hazard, and the results were aggregated to develop the multi-hazard risk index. These results were developed into a map using QGIS. 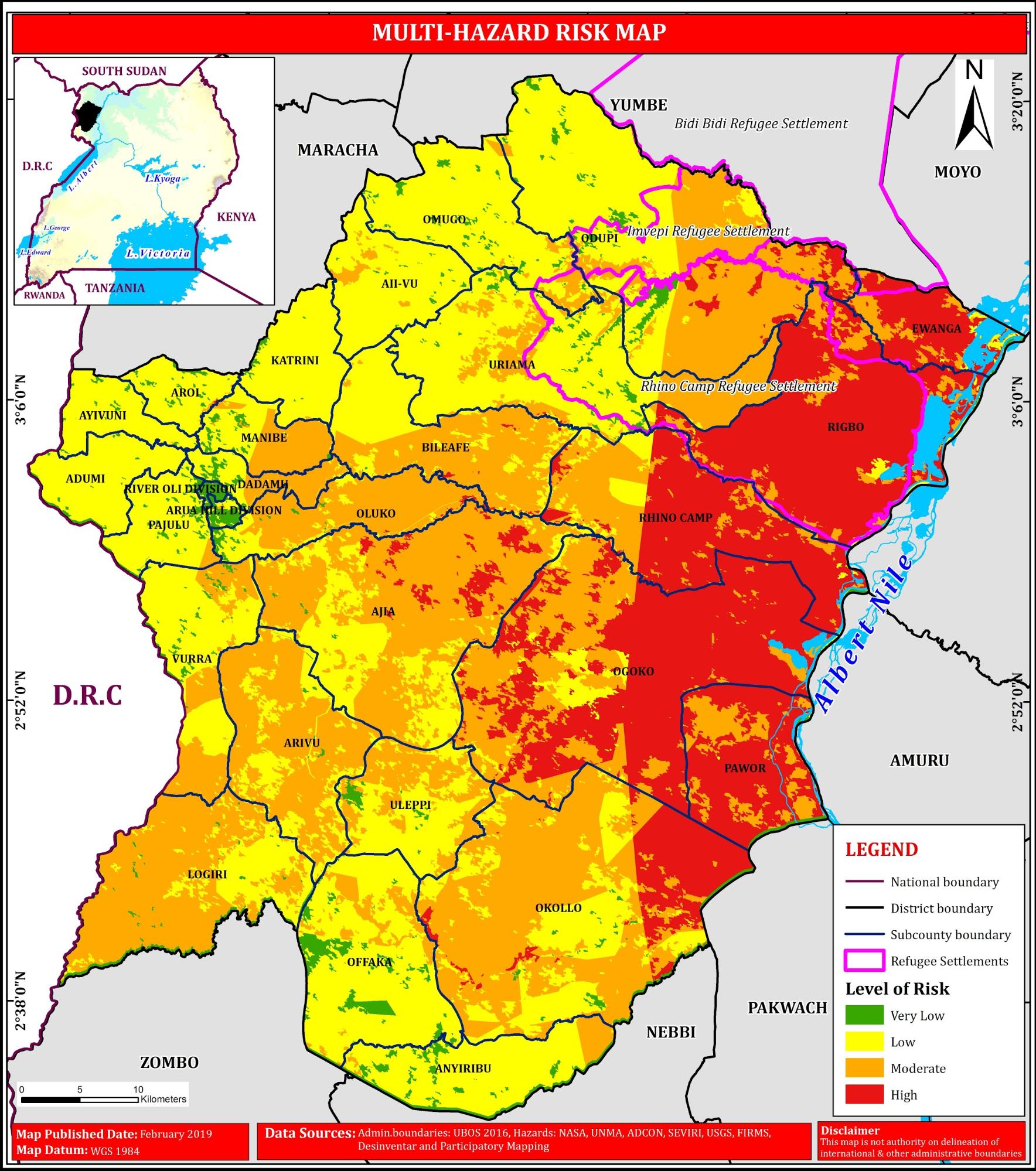 There is also the Land Use/Cover Changes map showing the levels of environmental degradation in the refugee settlements and host communities in the District, which enables communities to envisage the impact of their activities in the region’s resources and planning for their future use. This map was produced by comparing two sets of Sentinel satellite imagery between 2016 and 2019. Using the unsupervised classification algorithm in QGIS, land use and land cover changes were detected and characterized. Vegetation changes were then further re-analyzed to extract areas within Arua district that had degraded. 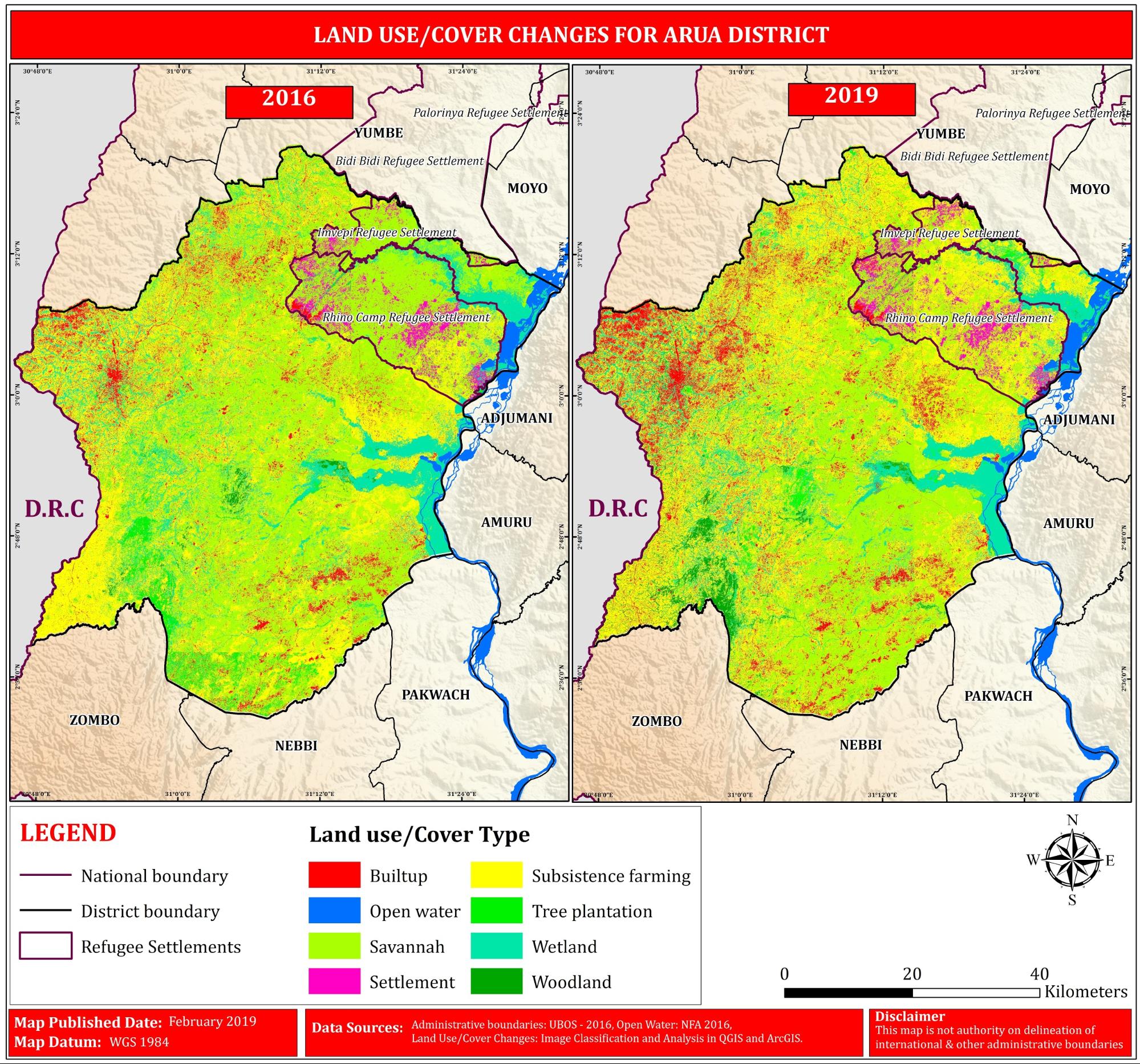 The HOT team, in collaboration with UNDP, also engaged in hands-on workshops with community members and the local and national governments in Arua district and central Kampala. These were geared towards building capacity in the prevention, understanding, and awareness of the impact and likelihood of natural hazards.

The five-day drone mapping and training program aimed to equip both central and local government officials with tools and software that could assist them in updating, investigating, and verifying their hazard and exposure data in the field. The first three days of the program consisted of a practical workshop in Arua district, where local government representatives were introduced to drone regulations, how to operate a drone, and capturing imagery. The remaining two days consisted of a practical workshop in Kampala, where participants learned how to process the imagery (captured in the District of Arua) and analyze the imagery using QGIS to detect change in land cover and land use.

The participatory mapping exercise held with both the local government and community members across the area of interest in Arua district was another important element of this engagement. Through this exercise, HOT worked with participants to identify over 80 perceived risk and hazard areas in these local communities. The final map was produced by digitizing and combining hazard boundaries that community members had identified and traced onto paper-based sub-county maps. In this exercise, participants were asked to identify and locate the extent to which hazard affected the respective communities. These community-drawn boundaries were later digitized using JOSM – an open-source OpenStreetMap editor – which enabled merging of overlapping hazard boundaries across sub-counties. The final map product was developed in QGIS. Once the map was created, the information was used to verify the government low-resolution hazard and exposure datasets as provided in the Risk Profile for the district of Arua. 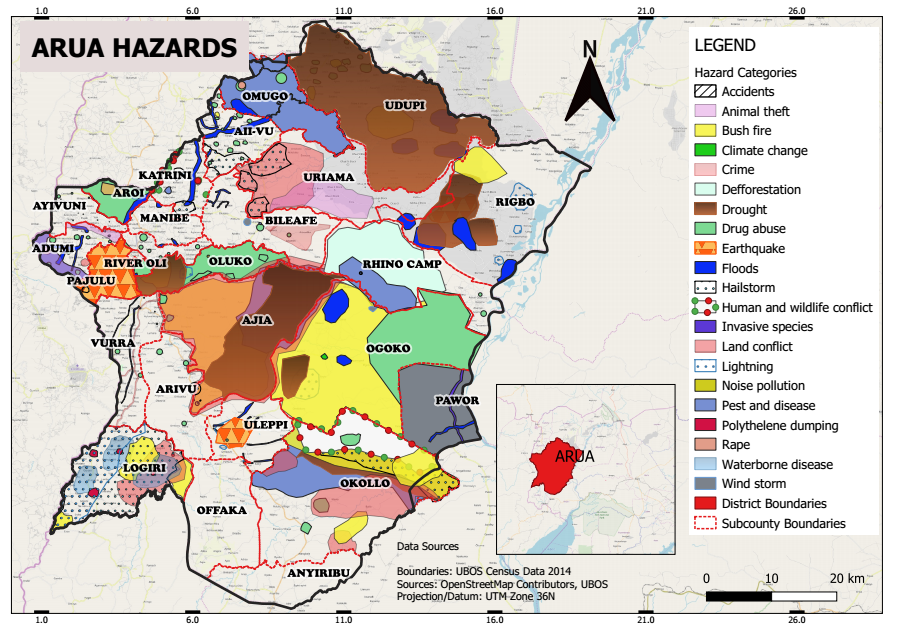 Hazards as perceived by the community members in Arua District

In June 2019, the Risk Atlas was presented to Commissioner of Disaster and Risk of the Office of the Prime Minister (OPM) along with other representatives from UNDP and OPM. OPM is in the process of reviewing the Risk Atlas and the activities that encapsulates the production of this project to best decide how to integrate it with the existing Risk Profile for both Arua district and the rest of the country.