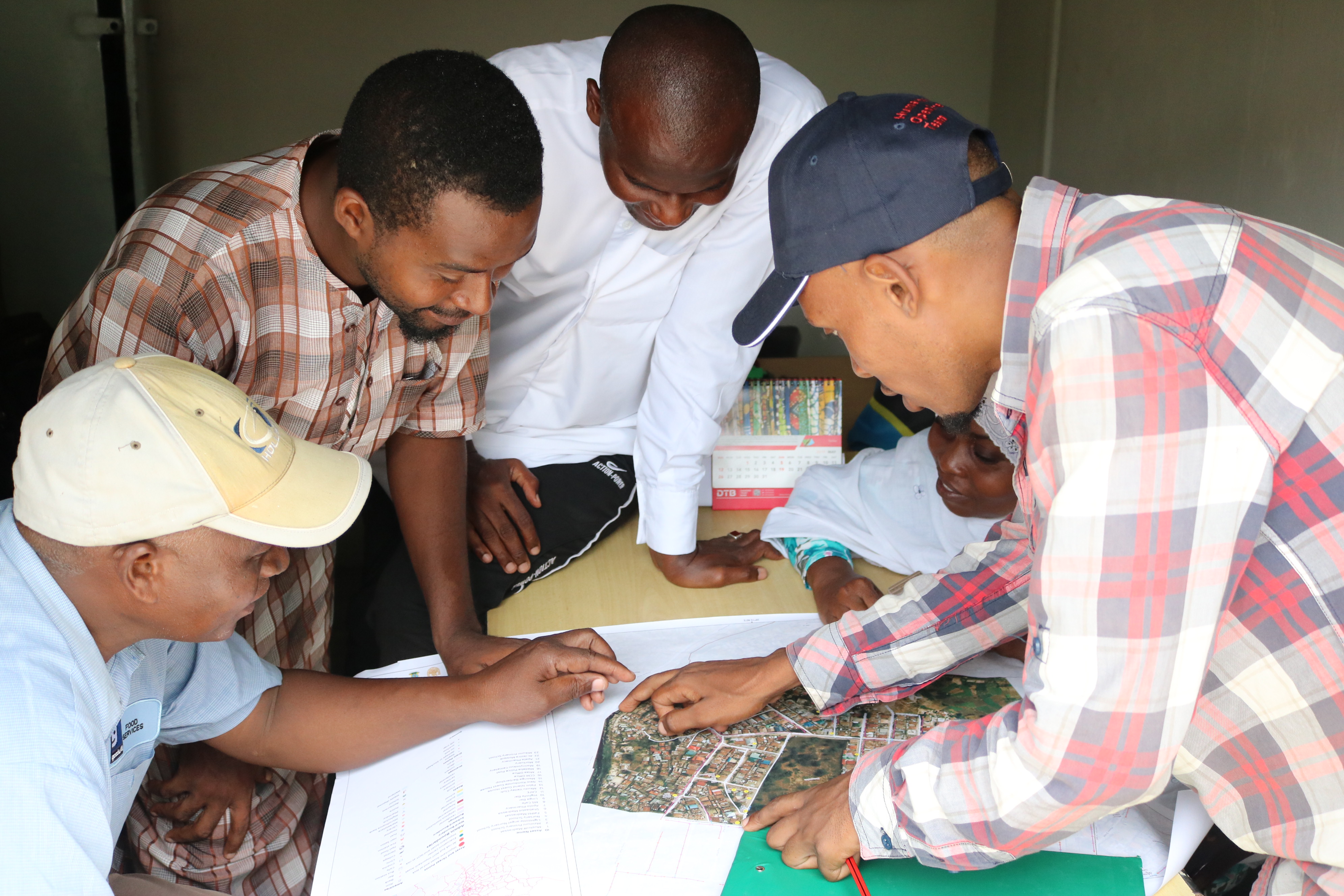 Since the project kicked-off in 2015, Ramani Huria, funded by the World Bank and implemented by Humanitarian OpenStreetMap Team (HOT), has managed to map three-quarters of one of Africa’s megacities, Dar es Salaam. As a city that is particularly vulnerable to floods, the team focused their mapping on flood-prone areas, especially in informal settlements where vulnerable populations live.

Dar es Salaam is vulnerable to floods, rising sea-levels, coastal erosion, water scarcity, and outbreaks of diseases. The city, home to an estimated 6,368,000 people, is particularly vulnerable to climate change effects, caused among other things by poor planning and infrastructure, construction in hazardous lands and riparian areas.

Although the city is rapidly urbanizing and becoming a regional commercial hub, flooding causes huge problems for residents and impacts the economy. Participatory mapping is both an innovative and ideal way to get a city-wide picture of road and building conditions, as well as other infrastructure. By empowering students and local communities to do the mapping, Ramani Huria was able to collect data at a much larger scale and at a much cheaper price than would have been possible with traditional surveyors. 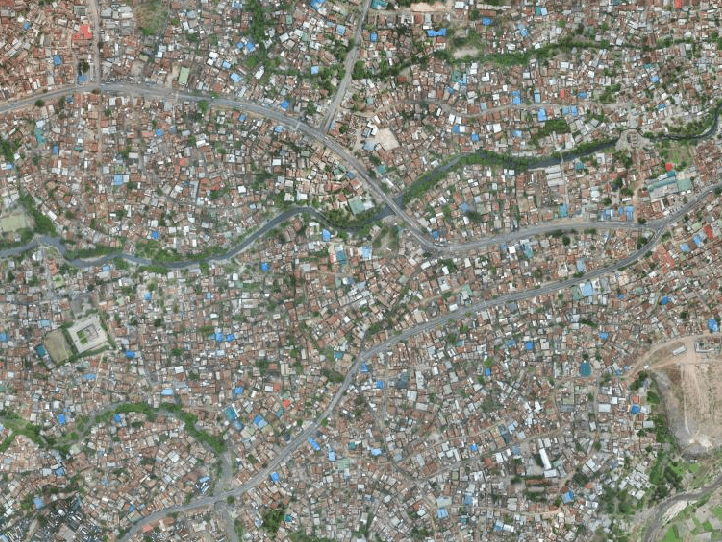 Heavy rainfall and other natural hazards are a big issue in Dar es Salaam that will only increase as the climate crisis grows. Cyclone Idai, which ravaged neighboring countries Mozambique, Zimbabwe, and Malawi, left more than 1,000 people dead and caused an estimated $2 billion worth of damages, was a stark reminder of the type of disaster Tanzania could face. Ramani Huria, along with other disaster prevention projects, can help reduce the risk of such disasters.

As Dar es Salaam grows, construction increases in whatever space is available, without proper urban planning, creating larger informal settlements. As a result, more waste is produced and drainage channels are blocked. These informal neighborhoods do not have access to waste collection services, therefore piles of rubbish build-up, filling rivers and drains, blocking them and increasing flood risk. For many people living in informal settlements, poor sanitation provision and practices can also contribute to the risk of disease and forced relocations. 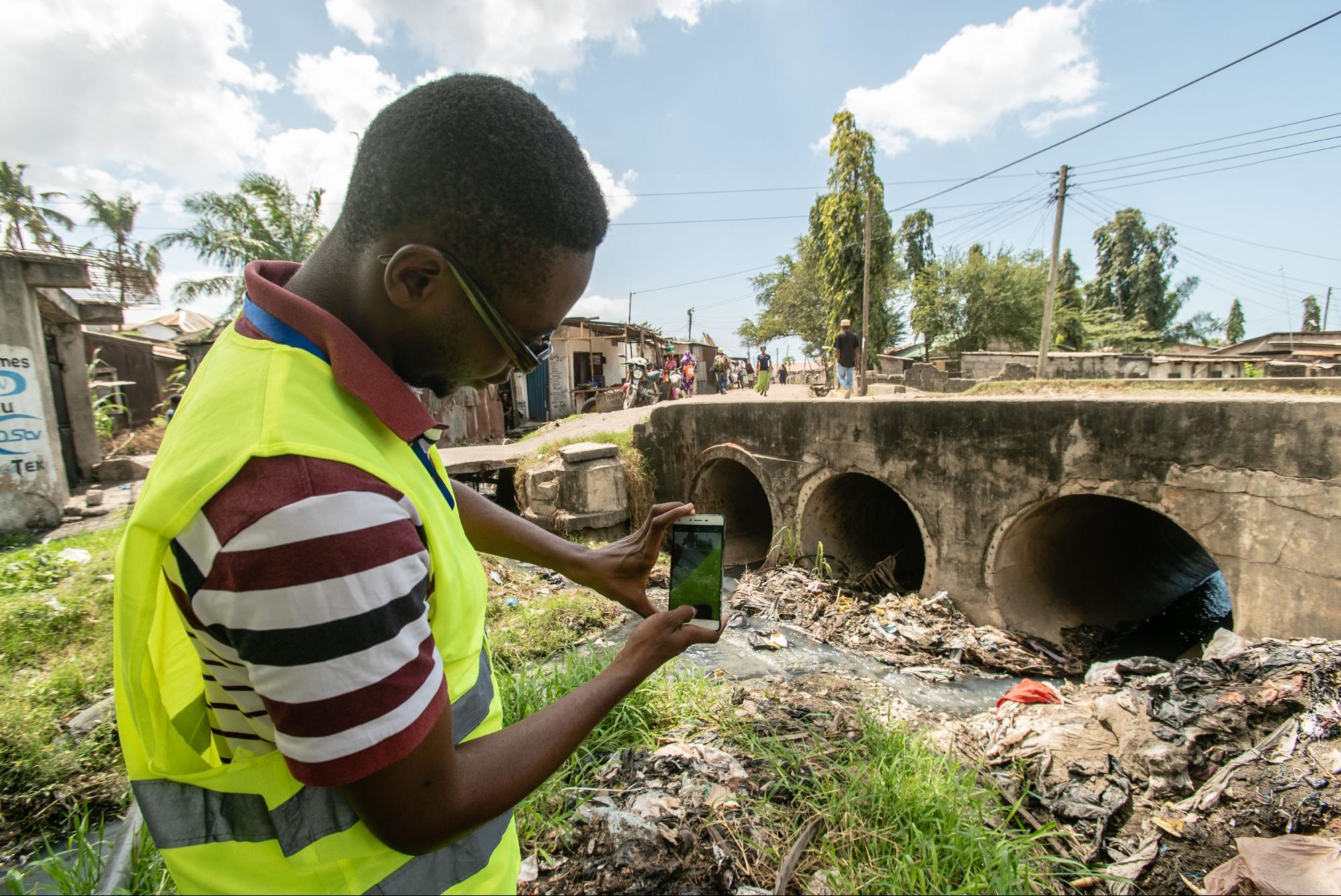 A mapper collecting trash points along the river in Dar es Salaam. Photo by Chris Morgan.

Training an army of students to map the city

We started phase one of the project in 2015, training more than 150 students to create detailed maps of the city. At the beginning of the project, we collected map data on paper, with students sent out into the city to collect the GPS locations of features such as buildings, rubbish points, tracing drains manually with clipboards and pens. This map data was then added to JOSM and uploaded to OpenStreetMap. One problem we faced was that data management and monitoring of collection was relatively poor, as it was hard to track those mapping around the city and corroborate if the GPS locations were taken correctly.

This first phase of Ramani Huria successfully started open mapping in Tanzania. The project showed the authorities, other organizations, and community members understand the power of mapping and how the map can be a critical** **tool to integrate with disaster planning, relief, and recovery.

For the second phase – which began in 2017 – we collected map data with mobile phone applications, such as Open Data Kit and Open Map Kit. Using these tools solved the challenge we faced in phase one, as it made data collection and management much easier. The online applications meant we could monitor the field data in real-time, as well as trace the history, time of collection and who collected it, in case of any discrepancies. This made data more systematic and by being stored in a server, it enables users to access their files remotely, eliminating the burden of physically accessing data. 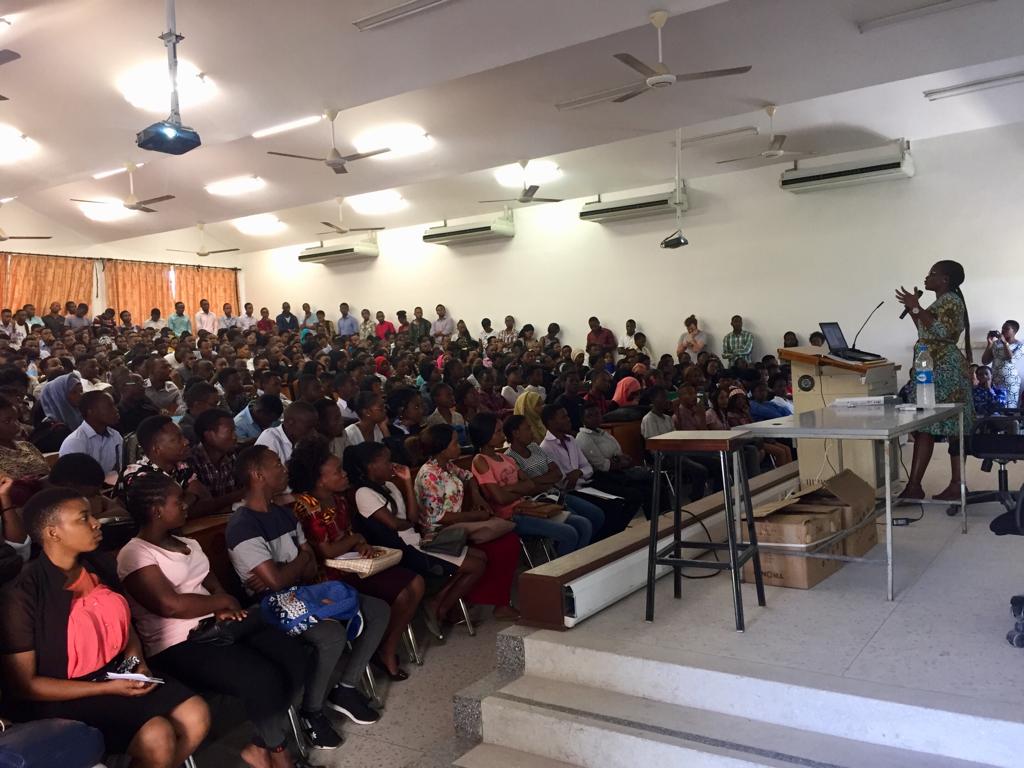 University students during industrial training in 2018. Photo by Ramani Huria.

The trained students worked with communities living in informal settlements to carry out ground surveys to add different layers of data to the map - including drainage, infrastructure, and assets. This important information, which is crucial to understanding what these settlements look like on the ground, cannot be obtained without working with and listening to the local communities.

These added layers of map data help communities and government agencies better prepare for floods, as they can: 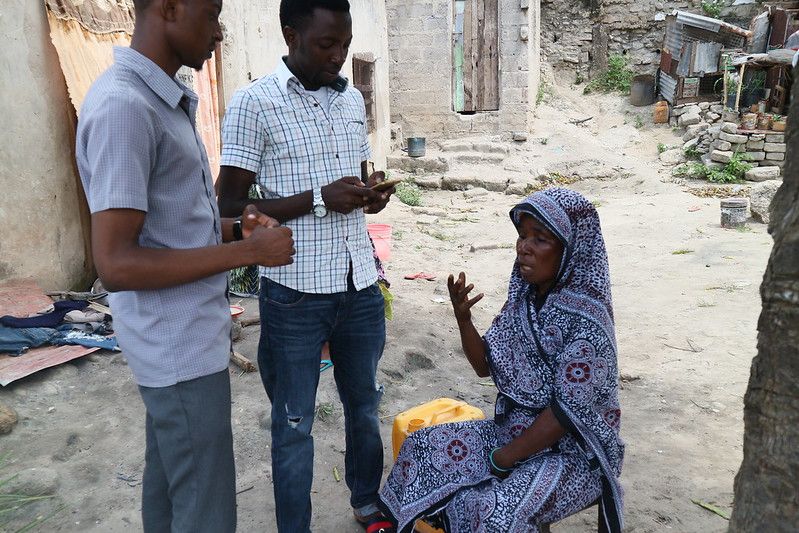 “Ramani Huria should stand as an example to other projects. The way community members were involved in the whole process of data collection adds value to data collected. Information collected stands as evidence of development priorities, including effective waste management and proper planning of settlements.” Osiligi Olasai, Ward Executive Officer, Kigogo Ward

Keeping up with the pace of technology

In the past, in order to digitize buildings, roads, and other infrastructure, it was necessary to use satellite imagery from corporate vendors. This imagery is very useful, but can often be low resolution, or subject to cloud cover. More significantly, it is not always within the power of local people to update when they need it.

Today, Ramani Huria is working on a new solution, using survey drones that cost a few thousand dollars and can be deployed even when it’s cloudy. These drones make it much easier to map different features, monitor particular infrastructure or river basins, and even respond quickly to flood events. 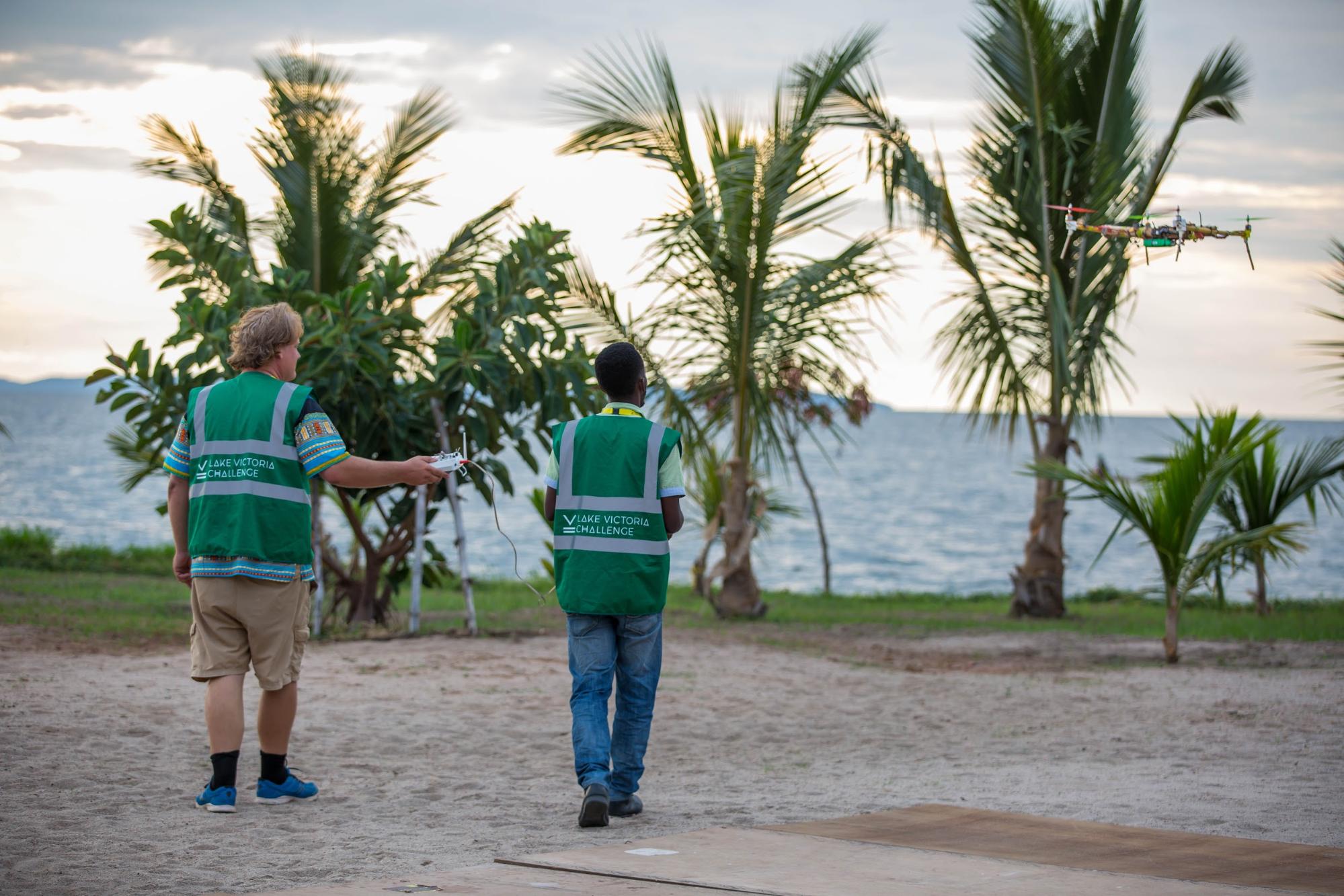 Flying a locally made bamboo drone at the Lake Victoria Challenge. Photo by Sala Lewis.

As part of this new project, we trained local pilots and worked with regulatory authorities to get permits. We’re developing and flying a locally made bamboo drone to capture images from above whenever we need it.

Before Ramani Huria, there was little spatial data in Dar es Salaam that could be used to establish trends and assess impacts and damage caused by flooding. The city council wanted to fill this gap, but also find a program that empowered students and community members to build resilience. We also wanted to make sure map data inform decisions across sectors, including city planning, disaster management, community development, and decisions on land use.

With flooding likely to become an increasingly severe issue due to climate change, creating good maps is a necessary part of building a broader resilience framework - and why it is so important for authorities to continue utilizing map data to strengthen the city.

What legacy has Ramani Huria left and what can it teach future projects? The team reflected on the main successes and lessons learned over the last four years:

Ramani Huria the project might be ending, but the legacy will continue over the coming years with the Resilience Academy, OpenMap Development Tanzania, and the many communities who have been involved in the project. But open mapping in Tanzania is just beginning.