This was definitely a new kind of activity for HOT. To start, we were directly by WHO to take part, and staff at the Tunis WMC office was incredibly active in the entire process.

This was definitely a new kind of activity for HOT. To start, we were directly by WHO to take part, and staff at the Tunis WMC office was incredibly active in the entire process.

And, this was the first time we worked so closely with Stand By Task Force and GISCorps, both amazing communities from which we learned a lot. We have all worked together before on various responses and projects; even now, we're collaborating with GIS Corps in Indonesia. But again, we were communicating and working closely together day to day throughout the entire activation. SBTF uses Skype chats and a lot of Google Docs to coordinate ... we jumped right in on this lead. Both groups published excellent wrap ups SBTF's post and GISCorp's wrapup.

The way data collected was different. OpenStreetMap was one among many sources, with everything collected in those GDocs. For this phase, WHO was not as concerned about data licensing, just trying to get everything out there collected. This did mean a lot of careful discussions about how to handle data with different licensing, what the implications were ... a useful time to educate on what can be arcane, especially in the heat of a humanitarian response. 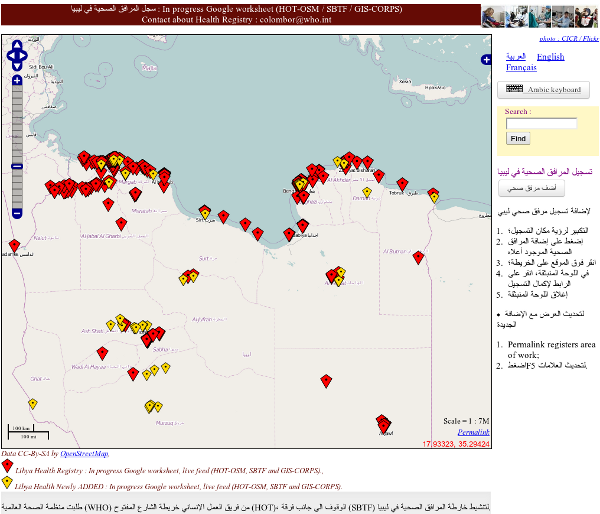 A main contribution of HOT came from the incredible Pierre Béland, who developed a live visualization of the health facility mapping from the GDoc, as well as a simple form for contributions from this map interface. He's integrated OSM and GDocs two ways, no doubt will be useful again.

In the end, we have a mixed data set, but it's meant as just a starting point. WHO wants to survey on the ground, all these facilities with GPS, by locals, which means they'll be completely free and open for use in the commons, in OpenStreetMap. The logistics of this are tricky in a still unsettled post-revolution Libya. Both WHO and HOT are looking into options to continue the work.

We did have good contact with a number of interested Libyans, especially expat medical professionals. I think the call to participate must have gotten into the right channels. However, it was difficult to bring these folks in ... being medical professionals, they're really busy, mostly not in the same cities as us in the response, and not that familiar with mapping. They were super enthusiastic about the project, and for that I totally appreciate, and hope we can find a way to collaborate more as things develop.