On May 26th, we were at JokkoLabs, a co-working space in Dakar . With the digital campus of AUF, they are the anchors of the OpenSource and OpenData communities in Senegal. We met with them a couple days earlier and planned for a combined event around OSM, HOT and JokkoFabLab, a FabLab project. JokkoFabLab was the best introduction for the Senegalese tech community which managed a FabLab project and discovered OSM a couple of weeks ago during their fieldwork and started using it for its cartography on the web but also as a storage point for some of the info they are gathering. The OSM presentations and hands on sessions went well, generated a strong interest amongst this group of 25 individuals, JokkoLabs employees, students, software developers, civil servants, and consultants on ICT/GIS for entities from the Senegalese government. This session successfully raised awareness of OSM and its potential for the activities carried out by the participants and built trust. A relationship with them is emerging and we outlined concrete next steps so that the potential of OSM can be realized. As always many are the possible options, we’d like to mention a few of them. JokkoLabs together with the digital campus of AUF can work as a hub for OSM the way it works for other OpenSource projects. The recent interest of the OpenSource movement in Dakar around OpenData is creating opportunities for collaboration among OSM, Jokkolabs, and AUF. One opportunity is the Plan National Geomatique, a project to create a road map for the development of a Senegalese Spatial Data Infrastructure (SDI). Another opportunity is to build on JokkoLabs’ work around SamaBaat, a web portal featuring various social media tools including Ushahidi which was used by the Senegalese Civil Society to monitor the last presidential election. It is also another example of collaboration across humanitarian and crisis preparedness domains. This connects with the global dialogue HOT is having with OCHA and the other Voluntary Technological Communities (VTCs) around Communities of Interest (COIs) which associate “classic” humanitarian actors and VTCs in humanitarian actions.

HOT met with other groups in the Senegalese tech community during these 3 weeks. We met with the managers of the Digital Campus of AUF in Dakar and Saint-Louis as well as the professors in charge of Computer Sciences and ICT at the University Gaston Berger (UGB) and in the ICT Incubator of the University. HOT also coordinated with CTIC (incubateur des TIC au Sénégal) by meetings with the manager, participating in a workshop with the CTIC entrepreneurs, and giving a lightning talk at their monthly workshop. All this resulted into awareness around OSM and interest for its potential for some of the projects on-going in this ICT incubator. 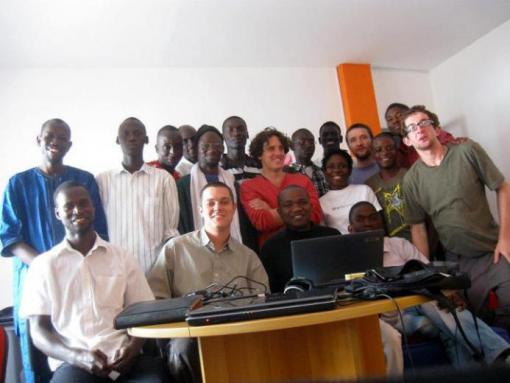 Group picture after a full day of editing at JokkoLabs