HOT was invited to speak at the 5th AMCDRR conference. Emir Hartato spoke on behalf of HOT about our work in Jakarta last year, our resources and support and partnership with AIFDR. 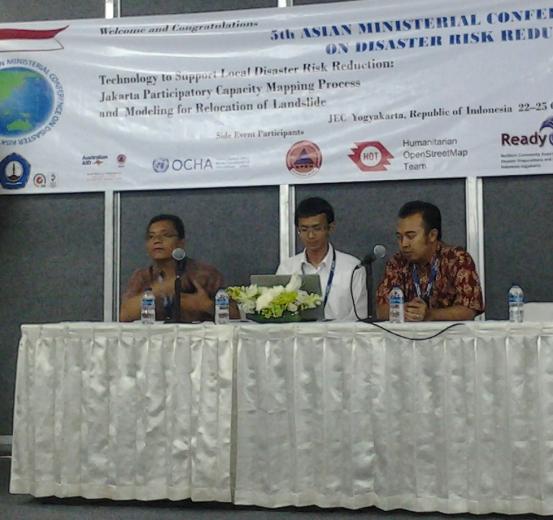 Session Objectives: Teach participants about potential technology, namely OSM and InaSafe Plugin, that can be used to support local Disaster Risk Reduction. At the start of this project, it was difficult to access data and maps in order to create contingency plans for disasters. However, now in Jakarta, with the help of HOT, critical infrastructure and RW (neighborhoods) boundaries are visible and accessible by all in OSM. Having these maps available allows for greater data analysis, such as InaSafe, or determining the impact of future disaster.

Description: In order to understand the potential impact of floods to communities, the BPBD realized that they needed to know where people live and the structures in which they live, play and work. This information would help with determining potential evacuation areas and routes. Mapping this type of information is time and energy consuming, as well as extremely difficult if you do not know the area. This is why BNBP decided to use OpenstreetMap to digitally map the city by community members that are already familiar with the area. They realized that mapping all of Jakarta would be impossible in a small time frame, so they chose to map only the major infrastructure, namely hospitals, schools, places of worship, and sports facilities/parks. BPBD Jakarta also decided to collect administrative boundary lines. Mapping the subvillage areas was useful for improved coordination in disasters because it would provide more precise identification and information as to if floods occurred in the past. The OSM platform provided freely available and easily accessible data.

Theme: Introducing potential technology that can be used to support DRR

The Asian Ministerial Conference on Disaster Risk Reduction (AMCDRR), a biennial conference organized by rotation in different Asian countries since 2005. The event represents a unique opportunity for Ministers in charge of disaster management from the region to reaffirm their commitment to the implementation of the Hyogo Framework for Action (HFA). The conference also serves as a forum to exchange experiences on successful practices and innovative approaches in implementing HFA’s five priorities for action at the national and local levels. Four previous AMCDRR have been organized in Beijing, China (2005), New Delhi, India (2007), Kuala Lumpur, Malaysia (2008), and Incheon, South Korea (2010).

This conference focused on three themes:

OSM fit nicely into the themes of the conference since we promote community mapping, and therefore local empowerment. The president of Indonesia attended the conference and was intrigued by the InaSafe plugin, which uses OSM background data, that AusAID has developed. 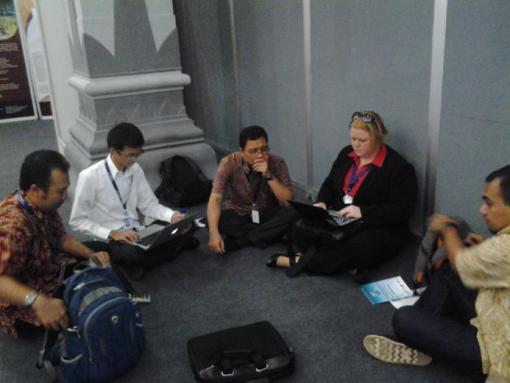 Working hard to finalize the presentation. 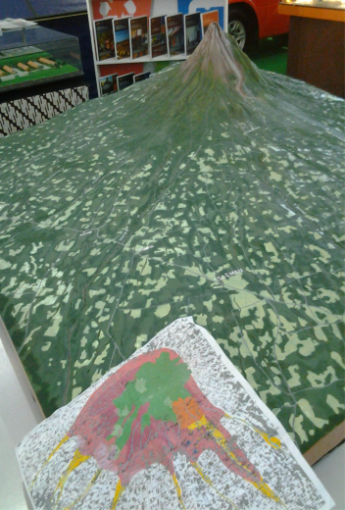 Some of the scenarios that were displayed at the conference. This one shows Mt. Merapi, the towns surrounding the volcano and where the lava flowed in the 2010 eruption. This violent eruption killed over 200 people and damaged thousands of homes.