The Peace Corps and Humanitarian OpenStreetMap Team have been collaborating for over a year. To me its a natural connection. Peace Corps Volunteers (known as PCVs) spend at least two years in country, working closely with communities and local organizations. One of the first things a PCV does is make a map in their community, along the lines of a traditional, paper based participatory mapping exercise. A PCV today is connected, a higher percentage have access to mobile networks than running water; and that's changed their connection to their fellow volunteers, home, and communities. Two years is enough time for real change and mentorship and learning, and increasingly, technology is a part of that.

Returned Peace Corps Volunteers (RPCVs) maintain connections to the places they served, and want to continue to support them. I first met Patrick Choquette and the Peace Corps Innovation Team at Random Hacks of Kindness 2012, held at HOT's DC office, the OpenGovHub. The Peace Corps had posed a challenge to map hospitals in OSM, which was a great opening for John Crowley and myself to talk with them more about really bringing OSM into their innovation initiative. A broad plan came together, to introduce and promote OpenStreetMap within Peace Corps HQ and the broader community of PCVs and RPCVs, and weave OSM into the training of the Peace Corps. Happy to say, we're well on our way.

In April, Alex Barth from MapBox, Josh Campbell from State Department HIU and Imagery to the Crowd, and myself presented various angles on OpenStreetMap at Red Cross HQ, including one of the first public unveilings and lessons on the iD-editor. We had a great showing. A few months later, WorldView, the Peace Corps Association magazine, published a great article on the event and OSM initiative at the Peace Corps. 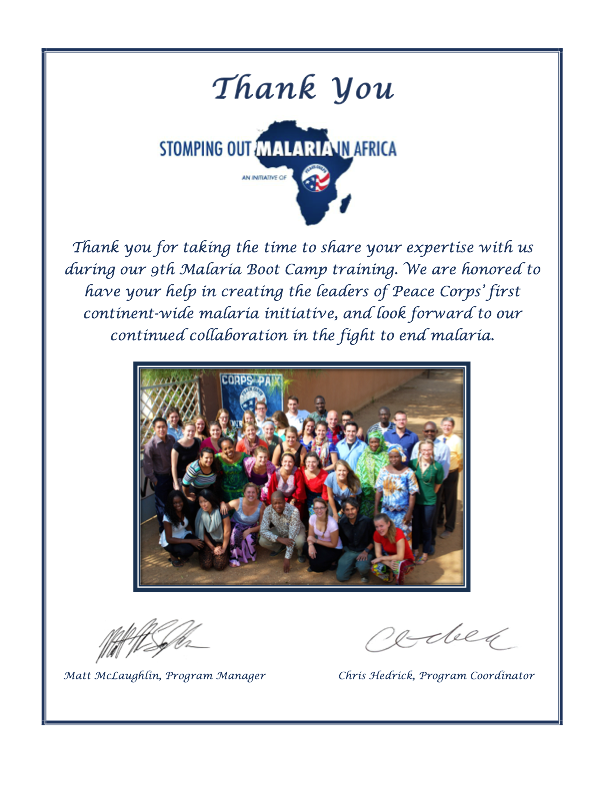 Three times over the course of last year, I've presented OSM to the Stomp Out Malaria Boot Camp, a workshop taking place in Senegal which also introduces technology. It's been enjoyable and a little surreal to have my big face projected on a screen to a roomful of 40 people on the other side of the world. We've had RPCVs and PCVs taking part in HOT activities, including trainings in West Africa. And Jeff Haack, who's worked extensively for HOT and OSM around the world was a PCV in Georgia.

Independently of all of this, there are certainly many others contributing to OSM in their service.

Would love to hear from all of you out there! This is just the start, and I'm eager to see how the adoption of OSM at the Peace Corps develops this year.