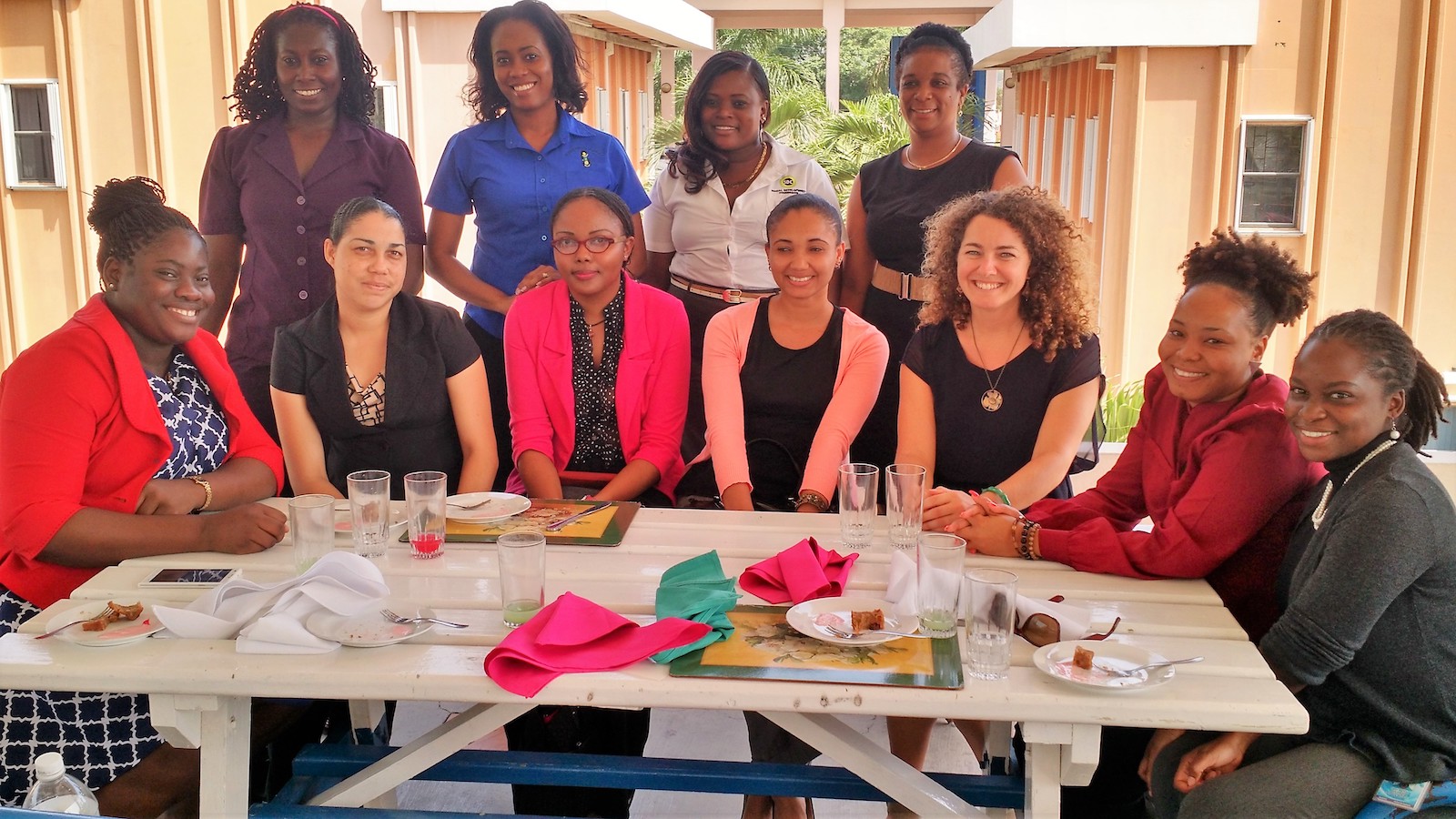 Web-based mapping is an activity of growing importance in many countries around the world, especially in places where base map data is often scarce and out of date. Governments are collecting more and more data, including geospatial data, and are beginning to understand the social and economic benefits of sharing the data. As part of the World Bank-DFID partnership to support Open Data in the Caribbean, Maggie Cawley and Steven Johnson conducted one-day open mapping workshops in Castries, St. Lucia, and Kingston, Jamaica during June 2015. Prior to the workshops, St Lucia and Jamaica completed the World Bank Open Data Readiness Assessment, which serves to assist the government in diagnosing what actions it could consider in order to establish an Open Data initiative.  The Caribbean Open Data Program aims to increase the ability of the country to create new businesses and generate more value, as well as improve the delivery of various services in each country. 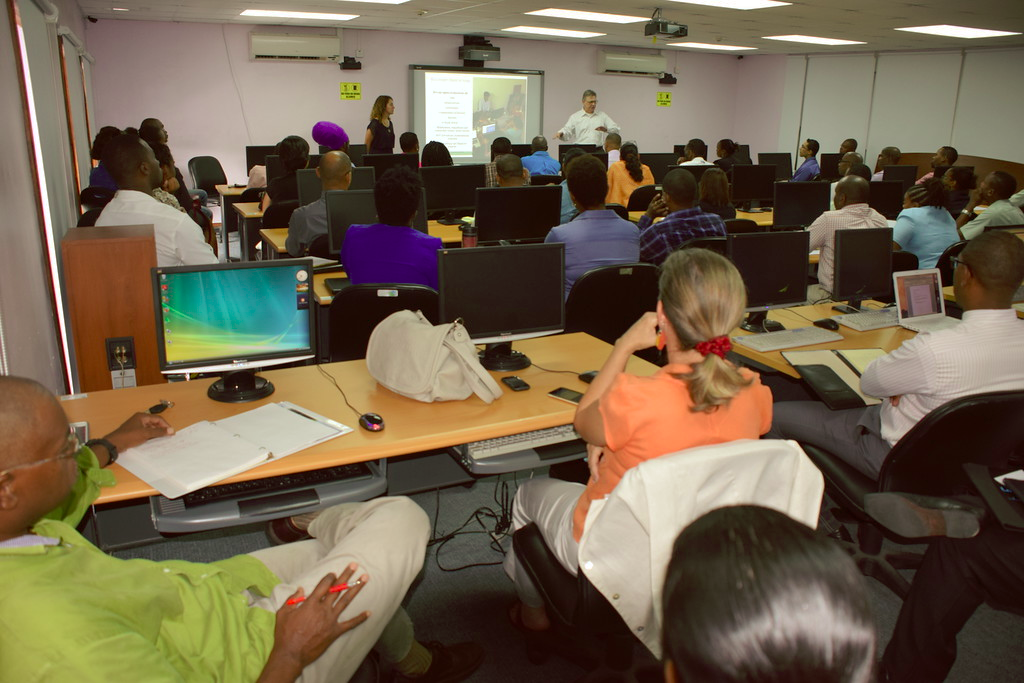 Each workshop began with a one-hour plenary session that introduced the growing ecosystem of open source mapping, including OSM, QGIS, Field Papers, and Mapillary, and was targeted to senior executives and administrators. This open ecosystem has lowered the cost of collecting and maintaining primary map data, and using the data for analysis or incorporation into other workflows.

The plenary was followed by an invitation-only six-hour training on using OpenStreetMap and QGIS. The training covered basic editing skills, digitizing, an overview of aerial image interpretation in OSM, tagging protocol, and an overview of ancillary technologies important to the open map data workflow (e.g. Mapillary, FieldPapers, Overpass Turbo, etc.). There was a live demonstration and step-by-step instruction in using OSM and Open Data in QGIS. The end of the day was spent covering meta-level organization of mapping events and community management.

Approximately 70 people were trained in the two countries, and there was a diverse industry representation among participants. The majority of attendees had a basic background in GIS and mapping. Participant interests ranged from the use of OSM during the electoral process to mapping World Heritage sites. To track the number of edits, the facilitators pre-configured the TeachOSM Tasking Manager to save each mapper's changeset with the hashtag #TeachOSM. Illustration 5 shows a total of 68 mappers and 883 changesets the 30 days after the trainings in both countries. Note the spike in the graph on 15 June, corresponding to the Jamaican workshop. 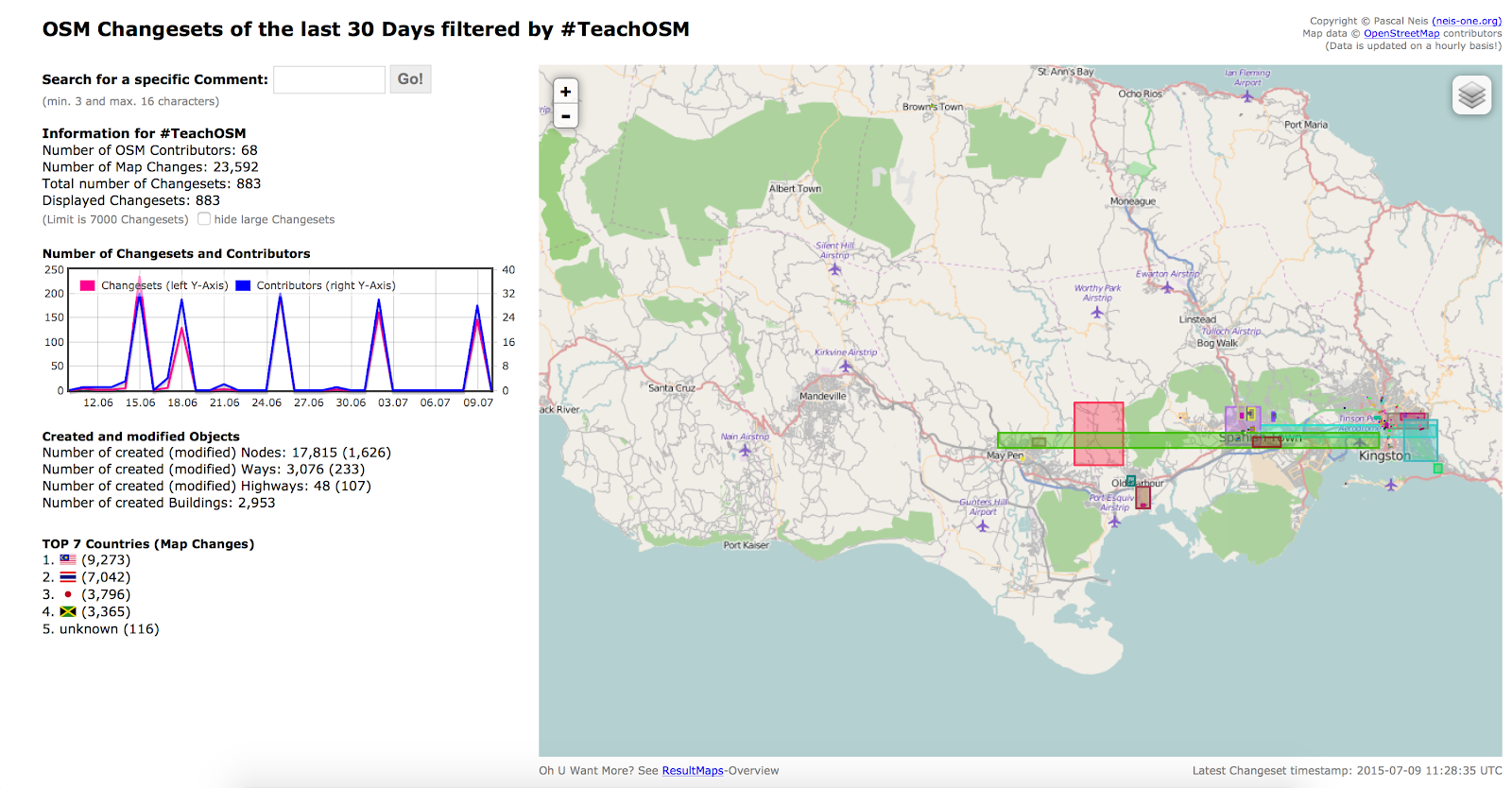 The majority of participants created a new OSM account during each training session, with a few exceptions in each country. A website developed by Pascal Neis1 allows the user to track activity on OSM by typing a user name into the search box. This enabled tracking of individual progress of selected mappers, and revealed the wide range of skill levels within the room. Edits ranged to as few as 35 to more than 500. Most individuals made edits to nodes, which means they added new points to the map with detail about what is at that specific location. In St. Lucia, OSM user 'destinydriven' made 574 edits during the training, mostly creating new nodes. Another user, BubblesMap, had 384 edits during the training. In Jamaica, there were a few users that have continued to map since the training, including map_chap, who made a total of 362 edits and followed up two days after the training.

Media outlets were present in each country, and conducted interviews with government officials and facilitators Maggie Cawley and Steven Johnson. HTS St. Lucia was one outlet present that showed a 3 minute feature in the news the evening of June 10. A photo gallery of the St Lucia training is available as well.  In Jamaica, the facilitators were interviewed by Nationwide News Network and NewsTalk93 FM. The event was also covered by the Daily Observer newspaper.

These workshops represent first steps to realize countries based on open geo data. HOT is pursuing support to build on these initial trainings with mapping events and additional training in each country. Previous workshop participants have been enthusiastic about open mapping, largely because open source makes geo-data accessible to citizens and lowers the cost of adopting geospatial and other technologies. But technology alone does not provide the organizational structure for newly minted mappers; to sustain an open source project requires a community of active mappers. Continued investments in open map data will have substantial benefit for the citizens of Jamaica and St. Lucia.