For the past 2 years, HOT in Indonesia is implementing a university program to build partnerships and collaborations with universities, disaster research centers, and local disaster management agencies.The purpose is for the universities to have the capacity to map exposure data in vulnerable areas and could support local disaster management agency in their area when needed. The big goal of this program is to have disaster prone areas in Indonesia to be well mapped.

HOT has been around in Indonesia for almost 5 years now. Looking back 5 years ago, we had so little data in Indonesia. The strategy to collect initial data was to train students from 5 universities, hoping that it would attract more mass to start mapping their area. We created a mapping competition with a big prize, which was attending the 2011 State Of The Map and FOSS4G Conference in Denver, USA. It was  a success, the students mapped a lot of buildings and infrastructures in their home city. However, after the competition was over there were no more significant mapping activities. Turned out a big incentive was not enough.

Years after that, HOT was focusing more on training local disaster management agencies (BPBD) in several disaster prone provinces. The exposure data collection was still our main focus to feed into InaSAFE system for disaster impact calculation. During that year, we met a very eager lecturer from Hasanuddin University in South Sulawesi. We finally did an extra training in the university and trained 15 students. A few weeks after that, the map of Makassar city was very well mapped as the lecturer started giving more students trainings and assignments to do mapping. The map created by the students was very detailed it was then used by the city disaster management agency to create a flood contingency plan in the following year. HOT saw this as an opportunity, then we developed a program called the University Roadshow in 2014-2015 where we trained students in 13 universities all over Indonesia which conveyed their interest.

During the first University Roadshow, we did three sets of activities: Socialization, OSM training, and QGIS – InaSAFE training, with a task given to the students after each trainings to be completed as a requirement for certification process. A total of 1,084 students from 13 universities attended the socializations and 352 of them continue to signed up for the first training.

Unfortunately, we could not accommodate that many participants for the trainings, we only trained 20 – 30 students from each university. At the end of the roadshow, we finally certified 55 students from 8 universities who completed the whole activities and assignments given to them.

Image 2. Students conducted a field survey simulation on the second day of OSM training. Later they were given a real field survey assignment as their requirement for certification process

During the roadshow, we also held a mapping competition between students. As a result, 273,127 buildings in 8 provinces were mapped by the students during the whole program.

As a result from this, HOT and DMInnovation (previously AIFDR) is extending the program in 2016. For this phase, we are focusing more on building the relationship with the universities, universities’ disaster research center, and to make the program more sustainable in the future. The purpose is for the universities to have the capacity to map exposure data in vulnerable areas and could support local disaster management agency in their area when needed, which is also the reason why this time we try to incorporate the disaster research center in each universities since they usually have a cooperation/collaboration with local disaster management agency. The big goal of this program is to have disaster prone areas in Indonesia to be well mapped, not only the infrastructures (buildings and roads) but also the land use, so that we can use the result to support the process of disaster risk assessment in the country.

The second phase of University Roadshow program has been going on since February 2016. We picked the universities based on their location (in disaster prone area), enthusiasm from the university and disaster research center, and potential continuation of the program in the future. For instance, some universities already stated that they are willing to put the mapping activity using OSM into their GIS course/lab curriculum. For this universities, we are focusing on teaching their lab instructors and lecturers so that they can continue teaching it to students in their university. Hopefully by the mid of 2016, we will have 5 universities incorporating OSM, QGIS and InaSAFE into their university curriculum. We also try to invite some local disaster management agency officials to attend the training in these universities so they know such program exists and hopefully more collaboration can be made in the future.

As this post published, we just finished the second training with University of National Development “Veteran” Yogyakarta (UPN Veteran Yogyakarta) and discussing the opportunity to put OSM into their GIS curriculum and using QGIS/InaSAFE to support local disaster management agencies in disaster risk assessment and contingency plan, especially for the eastern Indonesian region. On the following week we will head to Brawijaya University in East Java to start delivering the OSM training. 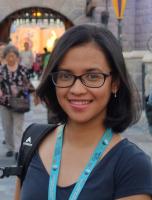