At 5.00 am Wednesday (7/12/16), a magnitude 6.5 earthquake shook Pidie Jaya District, Aceh Province. The epicentre is located at 5.25 N and 96.24 E on the ground, 106 km Southeast of Banda Aceh at a depth of 15 km. This earthquake was caused by the active faults Samalanga-Sipopok spreading from Southwest to Northeast.

According to BNPB, the Indonesian national disaster management agency, a staggering number of 11,668 units of infrastructure were damaged, including 161 houses, 94 traditional houses, 61 mosques, 16 schools and 10 government offices. Financial lost inventory is still under further investigation and accounting. The latest update on Monday (12/12/16) reported that 101 people were killed, of which 94 people had been identified. 134 people were heavily injured adding to a total of 666 people injured. A total of 83.838 people are in shelter, spreading across 124 places. Most affected population groups are from Pidie Jaya (82.122 people in 120 spots), followed by Bireuen District (1,716 people in 4 spots). 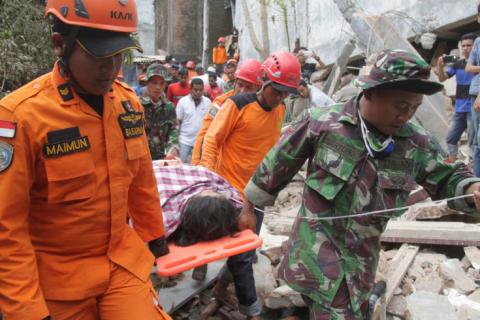 BNPB, together with on-field volunteers, is distributing aid supplies, including food (rice, cooking oil, eggs and sugar) and medicine. Prior to the earthquake took a hit, no building data in the affected region (Pidie, Pidie Jaya and Bireuen) were found in OpenStreetMap and only a few road networks have been mapped. This data is crucial and urgently needed to speed up humanitarian aid delivery process.

The Humanitarian OpenStreetMap Team Indonesia responded to this by launching a tasking manager for Pidie Jaya Area and mobilize volunteers, both from home and internationally: http://tasks.openstreetmap.id/project/178#instructions. In 6 days, over 70% with 409 tasks were mapped by more than 80 volunteers. 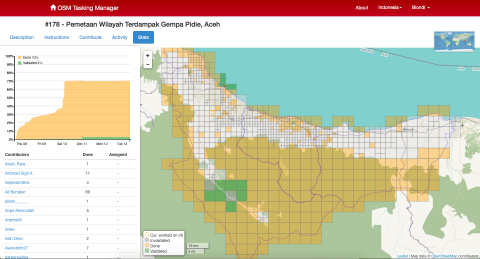 There are still 30% left to be mapped and 98% to be validated. To accelerate the process for an effective humanitarian relief and in line with HOT’s continuing support to provide tools that can be used to ease disaster management by completing spatial and mapping data, HOT in collaboration with BNPB, DMInnovation, supported by the Australian Government, will host a #PidieMapathon event in BNPB headquarters on Wednesday-Thursday, 14-15 December 2016. (https://www.facebook.com/events/309039279496748/).

The joint effort in mapping out exposure data and public facilities in Pidie will not only help the ongoing humanitarian response but can potentially be used to build-back-better and recover from this disaster event.