HOT has partnered with the Global Earthquake Model (GEM) and ImageCat on a Challenge Fund, focused on developing a global exposure database designed for multi-hazard risk analysis.

The Challenge Fund, formed by the Global Facility for Disaster Reduction and Recovery (GFDRR) and the UK’s Department for International Development (DFID) is aimed at building local and global resilience through innovation in order to better identify risk and enable more effective decision-making. This is the second round of the Challenge Fund, which focuses on three initiatives attempting to address recommendations outlined in the GFDRR report ‘Solving the Puzzle: Innovating to Reduce Risk’.

To decrease disaster risk management costs and increase resilience by developing a framework that facilitates a multi-hazard view of risk, through the development of the first set of open and internally consistent hazards, exposure, and vulnerability data. Please read the ‘Extensible data schemas for multiple hazards, exposure and vulnerability data’ paper published on PreventionWeb to learn more about the work involved with the second round of the Challenge Fund in 2017.

GEM, ImageCat and HOT worked together on developing a ‘Global Exposure Database for Multi-Hazard Risk Analysis’ schema, which resulted in the creation of the Global Exposure Database for ALL (GED4ALL), along with protocols to integrate existing datasets, as well as the generation of new exposure information. Development of the open global exposure database, aims to store different assets including, infrastructure, land-use, and socio-economic data. These assets will be relevant for multiple natural hazards, including earthquakes, floods, volcanoes, strong winds, tsunamis and drought.

An online tool is being developed by GFDRR, which will host the exposure data, along with the hazard footprints and vulnerability models. The data itself is slowly being populated globally through various projects, such as the Open Cities Africa initiative lead by GFDRR and the METEOR project lead by the British Geological Survey (BGS).

HOT provided guidance on how GED4ALL can be populated with building level data from OpenStreetMap (OSM), assigning the most commonly used tags for the attributes identified by GEM as integral to determining the structural integrity of infrastructure in the wake of a hazard. The following OSM wiki page proposes and welcomes contributions from the community on how tags can be best aligned with the GED4ALL taxonomy: 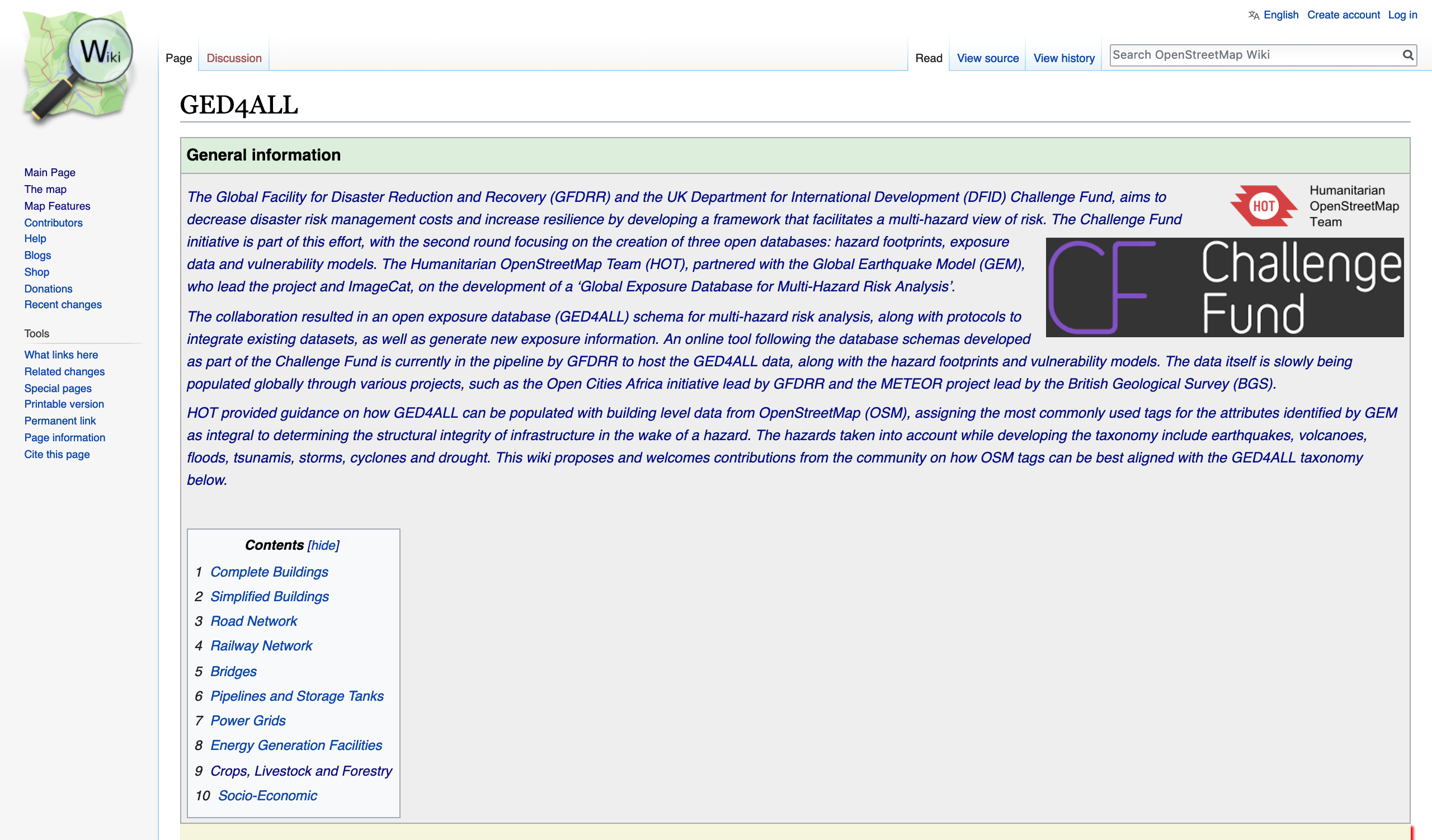