Mapping for Preparedness in Nepal

Today I bring you a guest post about a great project in Nepal. It comes courtesy of Nama Budhathoki, who is working to help ensure there is better data for disaster planning using OSM in Nepal.Nepal is a beautiful country with eight out of ten highest mountains in the world including Mt Everest. Its capital city has eight UNESCO-listed heritage sites. Nepal is a popular destination for tourists. Recently, several reports have warned that this spectacular nation is at high risks from earthquakes. According to Nepal Risk Reduction Consortium Secretariat, a mega-earthquake—which could occur at any time—is estimated to kill more than 100,000 in the Kathmandu Valley alone, injuring another 300,000 and displacing up to 1 million.

After a week and a half of work on the current Syria activation, we have made pleasing progress and have seen some fantastic results. Volunteers have begun mapping highlighted areas from the available Bing aerial imagery, the first three of which have been completed:

A massive thanks to everyone who contributed to these. Also please be aware that we're grateful to anyone that traces areas of Syria not covered by a task. Having said that, I've just added the next three jobs to the Tasking Manager:

This Activation follows discussions between HOT and the United Nations Office for the Coordination of Humanitarian Affairs for Mali (UNOCHA-Mali). The ungoing efforts to map Mali are very helpfull to humanitarian organizations. To support the Clusters coordination system and the humanitarian community, we are asked to continue the ungoing base mapping and to contribute to the geolocation of existing datasets for basic services. On Jan 16 2013, the UNOCHA-Mali and his humanitarian partners have highlighted the complex emergency situation in Mali.

OpenIR meets with the Indonesian Team

On Monday, the HOT Indonesian team met with Juhee and Arlene from OpenIR. This group of MIT affiliates have started a pilot study in...

I just landed in Ndjamena (Chad) for HOT. I am joining again the team of mappers of the EUROSHA Chad project that I helped setting up their activities in N’Djamena and Goré last fall (October/ November – see blog post) in close coordination with ACRA and France Volontaires, HOT’s partners on this project. This is an interesting time for the EUROSHA project 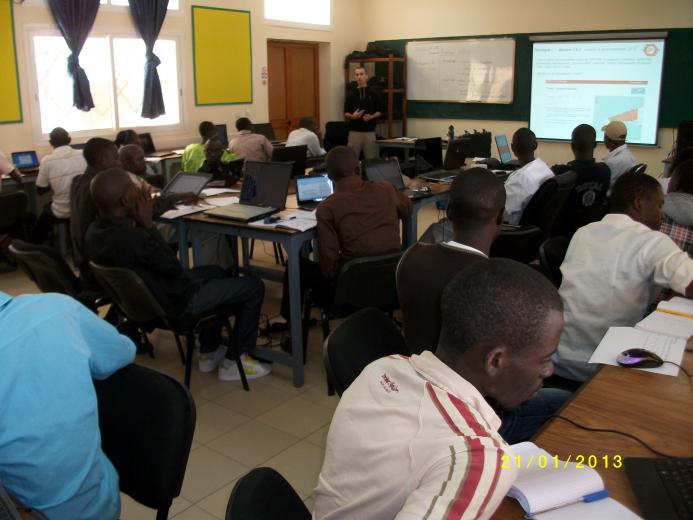 Return on writing the manual on OpenStreetMap kreyol ayitien

Pierre Béland and Joseph Reeves were voted onto the HOT board last week. Their nominations put the board to a total of seven for this year (with continuing five other members being Nicolas Chavent, Schuyler Erle, Mikel Maron, John Crowley and Harry Wood). They join the board after multiple years of active volunteering and coordinating of HOT projects.

[inline:pierre-beland.png]Pierre Beland comes from Monteal, Canada. An economist/programmer in his previous life, He has set up many remote projects, most currently in the DRC with Claire Halleux. You can read about that active project here.

Days of rain in Jakarta and surrounding areas have caused massive flooding in the region. Today (Friday) the flooding has eased somewhat but thousands of people remain displaced and 11 people have died. A state of emergency has been called until January 27th for Indonesia's capital city.

The six pilot workshops to the BNPB on intermediate OSM skills were completed earlier this week. Our team of eight HOT trainers finished their last workshop to members of the Kupang government with an interesting ending. The day we ended our workshop we flew home to a flooded Jakarta. The BNPB had sent us the maps, which used the OSM data we gathered last year as a base map, that showed the affected areas. (Though we knew what to expect when heading home, it still was a shock to see so many roads flooded and people surrendering their beds and belongings to higher ground. Read more about the Jakarta Floods here.)

I spent a week in Dakar preparing with some active mappers of the OSM SN community the attendance of the Thies BarCamp organized by the Senegalese OpenSource movement.

Back to Senegal, Further Creating a Mapping Community

Mapping Selayar Island with Help from MapBox and GeoEye

We first meet the ACCESS partners from Selayar Island at a workshop in Bali in December 2011. After this workshop ACCESS organized their own...

In December an exciting partnership agreement was signed in Indonesia which will continue the creation of freely available OpenStreetMap data in the West Nusa...